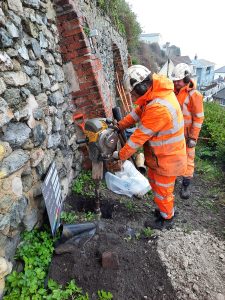 Retaining walls: On the case of a collapse on the Isle of Wight

Several stages of ground investigations were needed to uncover the causes behind the collapse of Victorian retaining walls supporting a road on the Isle of Wight’s south coast.

Following a period of heavy rainfall in January 2020, large cracks appeared in Belgrave Road in a central part of the seaside town of Ventnor on the Isle of Wight. The cracking occurred as parts of the masonry walls supporting the road failed.

Shortly after the discovery, Isle of Wight Council and Ringway Island Roads closed Belgrave Road, as well as Esplanade Road which runs below it. The roads have remained closed to vehicles since then.

The cracks in the road continued to widen and deepen progressively over
the following days. This resulted in deformation of the pavement and the loss of the footpath and the edge of the carriageway.

The steep slope between Belgrave Road and Esplanade Road is terraced with more than 20 retaining walls—or more precisely, masonry facings to a slope. Most of them were built more than 150 years ago.

Due to the age of the walls, hardly any data relating to their construction, the nature of the original backfill or any drainage measures used was available.

The failure and subsequent cracking involved a main section of wall that collapsed downwards, causing the section and secondary walls below it to also fail and creating “hinge” zones at the ends where the walls had fallen in slightly and cracked.

Coincidentally this area was a rebuilt section that had been damaged by a Second World War bomb. The bomb destroyed a hotel on the north side of the road and took out the top part of the main wall.

The principal challenge following the failure was to assess how the 600mm thick, unreinforced masonry facing walls, up to 5m in height, could support the ground and traffic loads from the road immediately at its top.

It was also particularly challenging to establish the complex geology and landslide model of the site.

Belgrave Road is set on the lower tier of the Ventnor Undercliff landslide system. This is believed to have been formed as a result of two phases of landslides after the last ice age.

The landslides within Ventnor are developed in the Lower and Upper Cretaceous rocks that outcrop on the south coast of the Isle of Wight. They comprise Gault Clay, underlain by Lower Greensand and overlain by Upper Greensand and Chalk.

Atkins chief geotechnical engineer Stephen Fort, who led the forensic investigation into the causes of the failure, explains: “The whole town of Ventnor has been built on the Isle of Wight Undercliff landslide. So, the question was: Is this as a result of the reactivation of the major landslide, or is it just a very localized failure of the retaining wall?

“Belgrave Road is very narrow and there are houses immediately at the back of it. There was a concern that if that wall does go, is there a risk to the houses?

“So, we had to initially determine the ground model. What are the houses sitting on and what is the wall made of? What is the material behind the wall? How is the wall related to the stability of the houses?”

The wall failure seemed to be confined to the walls and backfill, rather than being a deep seated global landslide failure relating to the Undercliff system. One of the aims of the ground investigation was to confirm the extent and position of the Upper Greensand landslide block beneath Belgrave Road and the adjacent properties.

Soon after the failure, a tensioned steel protective mesh was installed by Ringway Island Roads down the terrace to ensure the safety of workers and to hold the failed block in position.

Before the ground investigation started, a series of 20 automated tilt meters was put in place on the failed and intact sections of the retaining walls to monitor their movement.

The key objectives of Atkins’ ground investigations were to:

Led by Ringway Island Roads senior project manager Jason Boulter, Atkins specified and supervised the ground investigations which commenced in December 2020. They were largely completed by March 2021. Investigations, carried out by RH Solutions and Socotec, were performed in stages.

Before ground investigations began, Atkins did a load assessment to decide what type of equipment could safely be put on the road behind the walls.

Atkins technical director and technical reviewer on the project Paul Nowak explains that there were concerns about additional loads on the walls from ground investigation rigs.

A concrete coring rig on the road behind the wall failure

“Even for the small, tracked rig that we used on there, we went through and checked the loading on the wall to make sure that there was not a significant amount of additional load from the rig in the positions where we could put it,” he said.

“Ringway Island Roads engaged a contractor to do horizontal cores through the walls to identify what the wall thicknesses were, because of course we have no historical as built drawings of these walls. With the coring rig already on site, and for a small additional cost, we asked them to do some vertical cores as well, so that we could more easily analyze what the condition of the ground was behind the wall.”

This way all parties were satisfied that the ground investigations would not cause a significant amount of stress on the back of the historical walls or potentially unstable sections of road.

The main ground investigation was done by Socotec. This comprised dynamic sampling with rotary cored follow-on in five locations, hand held window sampling in a further five locations and four inspection pits. This was a more comprehensive investigation to establish the ground model and landslide system.

Following the main part of the investigation, Atkins was then asked to expand his brief and look at the stability of the other walls in the area and undertake quantitative and qualitative assessments. 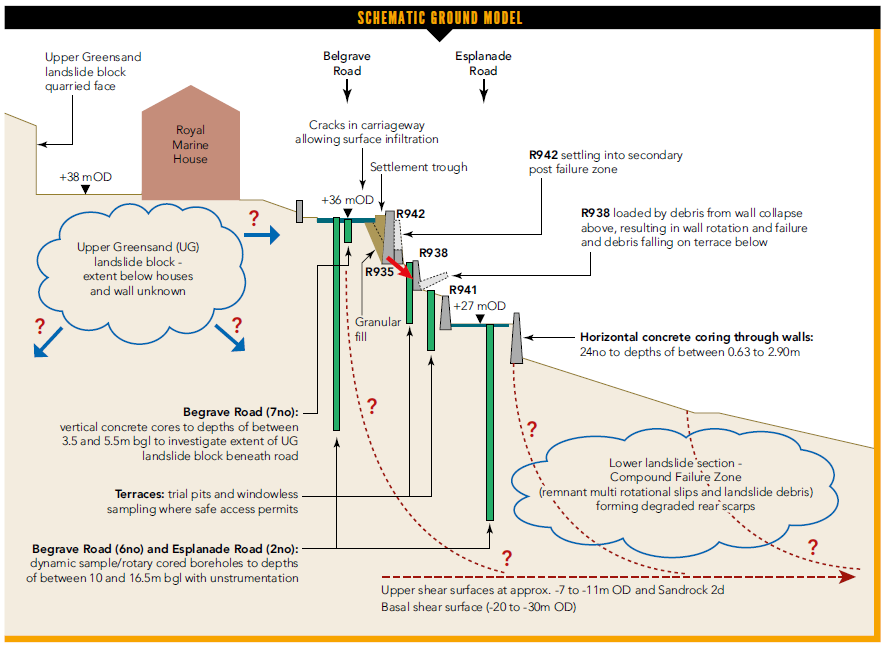 Atkins senior geotechnical engineer and the project’s design lead Jane Rendall says: “Ringway Island Roads asked us to look into the stability of the majority of the walls in the terrace. At that point we extended the ground investigation to include additional boreholes and wall cores that would allow us to create a ground model for the whole terrace. That was all completed by May last year.”

She continues: “In total, across the whole terrace, seven vertical cores, seven dynamic sampling and rotary core boreholes, 17 windowless samplers, and 30 wall cores were undertaken across what I would call four stages of investigations.”

As the ground investigation progressed, it also became apparent that Atkins would have to design some enabling works to strengthen an adjacent wall before the stabilization of the main failed wall.

“We had to strengthen that wall so that construction works could even be thought about, because the roads are so narrow and only supported by these masonry facings so you can’t safely get any plant in there. And there’s no way anyone could guarantee the temporary stability of these facing walls with a piling rig, a small crane or a small truck on top,” Rendall says.

Atkins’ findings from the ground investigations at Belgrave Road were consistent with the anticipated ground conditions within this section of the Ventnor landslide. The ground investigations indicated that the site straddles two of the displaced landslide blocks, with layers of Chalk landslide debris, Upper Greensand Formation and Gault Clay encountered at different levels across the terrace.

The failure was inferred to have been partly triggered by the above average rainfall that occurred in the days preceding it. The retaining walls were also susceptible to instability due to their age, a build-up of water behind them and a lack of adequate drainage behind the wall.

Following the ground investigation and interpretation, a remedial solution has been developed by Atkins to address the instability issues. The proposed works include the removal of the failed wall and the installation of a new retaining wall solution involving soil nails, with a structural vertical facing where the masonry wall has been removed.

Ringway Island Roads awarded the construction contract to Stoneham Construction in August 2021. The scheme is anticipated to be completed later this year.