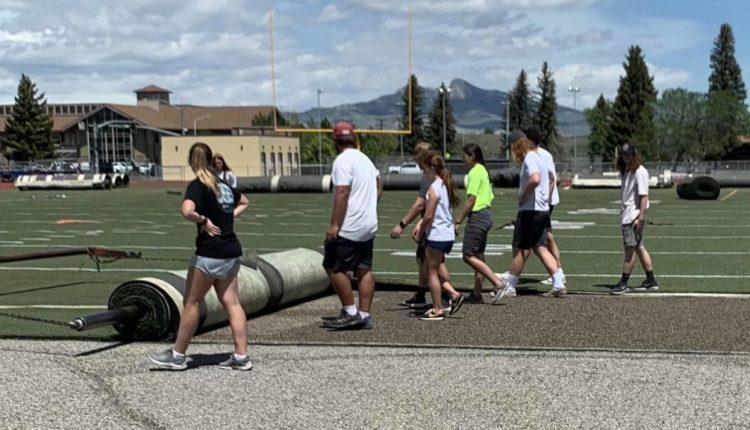 ***For All Things Wyoming, Sign Up For Our Daily Newsletter***

Since the mid-1960s, more and more sports teams have made the decision to replace grass fields with artificial turf. The fields require less maintenance, and an argument can be made that the surface is friendlier to players, resulting in fewer sports injuries.

Wyoming schools have also been turning over grass fields in favor of AstroTurf (so named because the first artificial turf field was installed at the Houston Astrodome).

The Spike Vannoy Field at Cody High School this summer is undergoing a replacement of the stadium’s first artificial turf, installed twelve years ago, at a cost of around $550,000.

At the beginning of June, crews removed the old field – all 87 rolls, each 15 feet wide and 80 feet long and weighing about 2,500 pounds – and prepared the field to receive the new material from FieldTurf USA.

Hult told Cowboy State Daily the district decided 12 years ago to move away from a grass field and install artificial turf.

“Our maintenance director was a rock star on researching and reaching out to all kinds of different companies to find out what kind we think would be best for us,” Hult said. “So he researched everything and came back with a proposal.”

Of the 65 public school football fields in the state, 25 of them – a little more than a third – have replaced grass with artificial turf, which Hult said is much simpler to maintain than a grass field.

“We haven’t done anything with it in 12 years,” Hult said. “You know, we’ve had some snowstorms, and we’ve had to plow snow off of it for a football game or actually even a soccer game a couple times. But otherwise we haven’t spent one dime on it.”

One of the lesser-known benefits of a turf field, according to Hult, is fewer injuries to players—and officials.

“I just know we’ve had way fewer injuries,” he said, pointing out that the turf, which is laid on a foundation made of a mix of sand and rubber pellets, is easier on athletes than hard-packed ground, especially in cold weather.

“And it’s easier on our officials,” he said. “You’ve got officials that are getting up in age, and they’re able to do it longer because they’re running on a softer turf than on hard ground.”

In addition, Hult said the grass field was much more difficult to take care of.

“First of all, with city water, we couldn’t water it after the first part of September,” he said. “So our field became like concrete. It was just hard to grow grass out there. Our soil wasn’t very good.”

Additionally, when it did rain, the field would become heavily damaged.

“I remember distinctly, one of my first years here we played Sheridan, and we had a storm, and all the cleats were out there and it was a mud bath,” Hult recalled. “And then the next day it was frozen after that. We couldn’t grow the grass.”

Hult pointed out that the one-time cost of the artificial turf as compared to the annual cost of maintaining a grass field, on paper, is a wash.

The chairperson for the Park County School District No. 6 school board said investing such a large amount for sports programs was a decision supported by the board and the community.

“The importance of our athletics and activities at (the school district) was a really big deal,” said Board Chair Brandi Nelson, explaining that when faced with the need for severe budget cuts several years ago, the community came out in support of athletics .

“You know, we serve close to 100 football players in a given season,” she said. “We had 40 boys soccer players this spring, and I don’t know how many girls soccer players we had. It’s just important to the community that our kids have facilities, so that they have these extracurricular things that they can do.”

Nelson said the staff made every effort to keep costs manageable.

“(Maintenance Director) Terry Gardenhire, who just retired, did some work in looking at (whether) we had any cushion there in that fund that we could use,” said Nelson. “And he came back to us and said, ‘Yes, we’ve got some wiggle room,’ because (there are) projects that come in under budget.”

Nelson explained that facilities maintenance funds are not tied to education, so by purchasing a half-million dollar football field, money has not been diverted from the classroom.

“If you amortize that out over the 10-year estimate, you know, it’s $50,000 a year,” said Nelson. “It’s not easy to maintain good level grass, you know, over time they can get uneven, and it’s hard on the athletes. We felt like it was justified, if you looked at the cost we would have to do to do that.”

“I thought I was going to have to raise some money for it again,” said Hult. “There had been talk, the board had said the last couple of years, ‘Tony, we may need you to raise money,’ but our maintenance director had saved money and budgeted for it within his maintenance budget. So we didn’t have to go raise money from the community or any of that kind of stuff.”

But the unseen benefit, Hult said, is in the health of the players.

“I’ll tell you, when you think of how many kids we have played football out there, and the minimal amount of injuries in comparison that I just know we normally would have, I think it’s been worth it just for that,” Hult said.

***For All Things Wyoming, Sign Up For Our Daily Newsletter***

Retaining walls: On the case of a collapse on the Isle of Wight