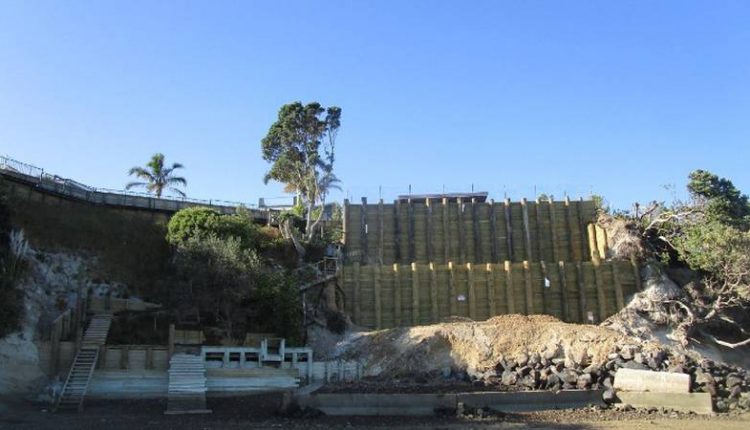 Auckland waterfront property owners have been warned not to build retaining walls to combat coastal erosion without prior council consent.

Two large retaining walls built without consent around a property in the Auckland suburb of Beachlands. (Source: Auckland Council)

It comes after a property owner in the Auckland suburb of Beachlands carried out “substantial preventative erosion work without council building and resource consents”, Auckland Council said in a media release.

K4 Group Management Ltd constructed two 20-metre-wide retaining walls – one 5.8 meters high and another 4 meters high – on a waterfront property on Hawke Crescent. The company applied for consent after construction work got underground.

Rocks, aggregates and concrete barriers were also placed on the foreshore to provide access and a working platform for machinery.

The company was charged under the Building Act for unconsented building work, as well as two charges under the Resource Management Act (RMA) for illegal use of the foreshore.

Chief Environment Court Judge David Kirkpatrick said K4 Group Management owner Ranjit Keshvara’s decision to proceed in the expectation he could obtain the necessary consents retrospectively amounted to a “thumbing of the nose at the regulatory regime”.

K4 Group Management recently pleaded guilty to the charges in the Auckland District Court and was fined $41,250.

The property sits along the Beachlands waterfront. (Source: Auckland Council)

Auckland Council investigations team leader David Pawson said “protecting properties from erosion is important, but we ask homeowners to work with us and apply and gain consent before starting any work”.

Pawson said the judge’s sentence “should act as a deterrent to others who are considering doing any work to their properties that merge onto any areas encompassing coastal or council reserves”.

“The damage to the area can cause major issues, and owners have an obligation to understand the rules pertaining to their property.”

He reminded coastal property owners that under the RMA, the Auckland Unitary Plan contains rules relating to activities on land and in the coastal marine area, including the foreshore.

There are also general rules restricting the depositing of material in the coastal marine area unless resource consent is obtained for it as a restricted discretionary activity.

Both properties in this case are identified in the Auckland Unitary Plans maps as being within a coastal erosion hazard area and in that area works in the vicinity of coastal cliffs generally require resource consent as a discretionary or restricted discretionary activity.