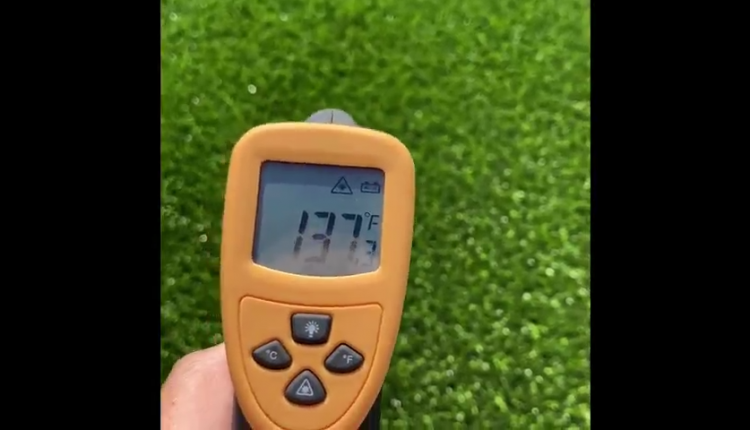 The sun was shining brightly, and it was 89 degrees on a warm August day.

It was 4:15 pm, and the new Timnath High School football team was gathering for pictures at the start of its usual practice time on the artificial turf field at PSD Stadium.

Surface temperatures on the field ranged from 138 to 139.7 degrees. Just steps away, the surface temperature of the natural grass surrounding long- and triple-jump runways and sand pits was only 87.2 degrees.

Those on-field readings at PSD Stadium, just northeast of the Prospect Road exit from Interstate 25, were the highest recorded in a recent Coloradoan sampling of surface temperatures taken at three different Poudre School District stadiums on two recent sunny days.

The data confirmed what multiple studies have shown: Artificial turf playing fields can be as much as 40 to 60 degrees hotter than natural grass fields on a hot, summer day.

While natural grass absorbs solar heat through photosynthesis, the fake grass — primarily made of plastic and filled with black crumbs of recycled rubber and silica sand — reflects radiant heat from the sun.

As alarming as those surface temperature readings sound, experts in high school sports injuries have seen no evidence of burns or other injuries directly caused by hot artificial turf fields.

Their focus has been on other heat-related illnesses, such as heat exhaustion, heat stroke and muscle cramps. Hot fields can factor into conditions that cause those maladies but are not the primary cause, said Jennifer Rheeling, chair of the National Athletic Trainers’ Association’s secondary schools committee.

Her organization has urged the use of WetBulb Globe Temperature, which measures heat stress on athletes at a certain time and place based on humidity, wind speed, sun angle and cloud cover. The NATA provides guidelines for scaling back activities and adding water breaks as the WBGT rises, and curtailing all outdoor workouts when it reaches or exceeds a certain temperature.

In Colorado, that maximum (Code Black) is a WBGT of 86.2 degrees. Rheeling said WBGT chart’s temperature thresholds are different everywhere, based on local weather conditions.

The National Federation of High Schools urged its state associations to adopt those guidelines this year, said Bob Colgate, the organization’s director of sports and sports medicine, and distributed thousands of Kestrel thermometers to measure the WBGT at specific locations, Rheeling said.

Restrictions in Colorado begin when the WBGT exceeds 76.3 degrees, with three rest breaks per hour at a minimum of four minutes apiece. If the WBGT is between 84 and 86 degrees, workouts cannot exceed one hour, including a minimum of 20 minutes worth of rest breaks. Football teams cannot wear protective gear or have any conditioning activities.

Even on those unusually hot days in late July and early August when air temperatures were in the high 90s, the WBGT never reached temperatures that required any restrictions, said Carlucci, who has been emailing daily forecasts for the WBGT to PSD athletic directors and fall sports coaches. There were a few days when coaches were warned restrictions might be necessary.

Coaches are required to check the WBGT online or with a measuring device before holding practices on hot days.

“There were a couple times in late July, when we were doing our summer camp where we chose to leave our turf and go to the natural grass,” Fossil Ridge football coach Jeff Fulton said. “We flipped everything to 4:30 in the evening, and when it got toasty, we moved to the grass.”

Yemm said he had a modified practice plan ready for potential restrictions based on forecasted WBGT for one practice in August on a day that didn’t get as hot as expected, and he moved another to 6:30 pm based on WBGT forecasts.

Rheeling, a longtime athletic trainer at a Washington, DC, high school, said the football coach at her school moved early season practices to 6 pm instead of 4 pm to avoid WBGT restrictions.

Yemm said he had never heard of WBGT until PSD adopted the guidelines earlier this summer. But he has no smokes with it and downloaded an app on his phone to take his own measurements.

“I think anything that benefits the kids’ safety is a positive,” he said.

Manufacturers of artificial turf playing fields have acknowledged concerns about how hot their products can get and are working on ways to reduce surface temperatures. FieldTurf, one of the industry leaders, claims in promotional material that its CoolPlay fields, which add a layer of cork crumbs on top of the rubber and sand, are as much as 35 degrees cooler than those filled with only rubber and sand.

There are good reasons that most major college football fields, some NFL stadiums and just about every high school playing field along Colorado’s Front Range are now covered with high-end artificial turf rather than natural grass.

The artificial fields don’t need to be mowed or watered and they can be used almost constantly for multiple sports throughout the year with almost no impact on the smoothness, traction and quality of play.

The radiant heat they reflect from the sun also melts snow faster. And when they do need to be cleared, plowing with proper blades doesn’t cause the kind of damage it does to natural grass.

And, as the technology behind artificial fields has improved with better cushioning, grass-like design to address traction concerns and better drainage, the incidence of injury has dropped to the point of being about the same as natural-grass playing fields, experts with the National Federation of State High School Associations and National Athletic Trainers’ Association said.

“It’s a wash,” Rheeling said. “I have noticed no uptick in any type of injury — ACLs, ankle injuries, concussions, none of them. I’ve been here 32 years, and it’s stayed pretty constant the whole time.”

She hasn’t seen any thermal burns or blisters directly related to the surface temperature of artificial-turf fields, either.

Christy Collins, president of the Datalys Center for Sports Injury Research and Prevention, said her organization doesn’t directly track those sorts of injuries. But if there were a significant number, it likely would be flagged in data collected through the online injury reports it collects from NCAA and high school athletic trainers across the country.

PSD has artificial-turf fields at each of his six comprehensive high schools that are used for a variety of activities, including physical education classes and practices and games for a variety of different sports.

The newest fields at Timnath and Wellington middle-high schools are IronTurf by GreenFields. The fake-grass fibers are woven, rather than tufted, into the mat, and the infill is a mixture of 70% rubber and 30% sand.

Heat absorption was a factor in the brand’s selection and model of artificial turf for those facilities, PSD construction services project manager John Little wrote in an email to the Coloradoan. A bigger concern was the GMAX rating — the ability of the surface to absorb the shock of a collision and reduce the likelihood of concussions and other injuries. The more rubber infill used, the higher the GMAX rating, he wrote. Synthetic infills cost about twice as much as the rubber/sand mix and provide less cushioning.

“We put a good shock pad under all these new fields,” Little wrote. “Facilities have had very good results with a 70/30 mix of rubber/sand, which give you the balance of resilience and stability.”

With most high school football fields along the Front Range now artificial turf, local coaches prefer to practice on the fake stuff.

“It’s a little bit better footing than the grass is, and because we play all of our games on turf, it’s nice for the kids to get used to that from a preparation standpoint,” Yemm said.