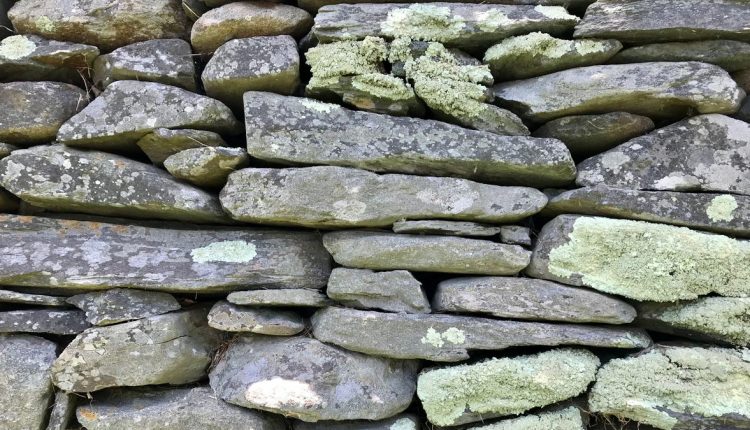 Reflections on stone walls and chimneys

I double-knot my sneakers and start down Third Beach Road in Middletown, where my family has reunited for a vacation. Peabody’s Beach is less than a mile away.

The road is flanked on both sides by stone walls: some tidy, some crumbling, most wearing at least a few green splotches of lichen and moss. At one point, dozens of orange tiger lilies preen in the sun, their petals a bold antidote to the dull gray stones behind them.

A Robert Frost line echoes from a long-ago English class: “Something there is that doesn’t love a wall, that wants it down.” Surveying the beautiful and intricate facades on either side of me, I disagree. They are magnificent.

Most of the stone walls in our region were built between 1810 and 1840, when New Englanders were primarily farmers. If you include New York, as many as 250,000 miles of these partitions rose up, amassing more rocks than it took to build the great pyramids of Egypt. The majority of the stones were “two-handers,” which meant one person could lift and carry them.

The walls are an enduring testament to human persistence, born of necessity. As farmers cleared New England forests to make their land arable, they found rocks everywhere, left behind by glaciers. The farmers pulled the plow-stopping stones from the ground and deposited them along the edges of their fields, an unlikely combination of brute strength and artistry.

But with each spring thaw, more stones arose. “People in the Northeast thought that the devil had put them there,” writes stone wall expert Susan Allport.

On my walk to the beach, near Indian Avenue, I see a stone wall trapped in the clutches of spiraling vines. By the mid-19th century, New Englanders began to abandon their fields as the fertile, rock-free midwestern plains emerged as the nation’s breadbasket. In the Northeast, agrarian subsistence gave way to jobs fueled by the American Industrial Revolution. Forests and vegetation returned to previously cleared tracts of land, ensnarling the walls farmers had painstakingly built and toppling them back to the ground.

Still, many walls were maintained for their sturdy demarcation of property lines, which Frost’s poem, “Mending Wall,” memorializes. In springtime, two neighbors walk the stone divide between their fields to determine what repairs are needed. Of the boulders they lift and reposition, one neighbor says, “We wear our fingers rough with handling them.”

When my wife and I bought Rose Cottage, the stone walls piled out back were not to clear a field, but rather to retain the yard’s sloping earth. We did install a barrier around the perimeter of our yard: a five-foot cedar fence to keep our children, all under 5 years old, from roaming the half block to Main Street. The wooden enclosure stood for almost two decades, its blond planks turning gray before succumbing section by section to winds and weather. Today, the last leftover boards provide fuel for our fire pit. Meanwhile, the stone walls continue to keep our tiered yard in check.

As Third Beach Road bends to the coastline, another stone artifact – a chimney – towers above the path to Peabody’s Beach. Like the walls along the road, the stack has stories to tell, I suspect, but they are indecipherable to me now. Passing by, I only know this: The house the chimney once served is long gone.

The words of another poet, Nikki Giovanni, come to mind: “Life is a marvelous, transitory adventure.”

I walk down the sandy path until it gives way to a wide strand. Beach umbrellas flutter, children laugh, a lone cloud floats in a perfect blue sky. I drink in the moment, as life-affirming and fleeting as an ocean wave.