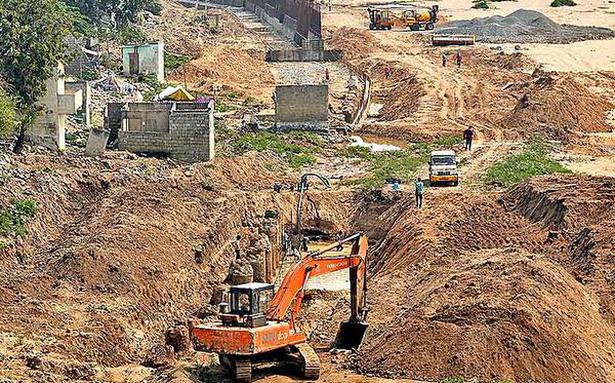 The Water Resources Department (WRD) is contemplating constructing two more retaining walls in the city to protect the people living on the banks of the Krishna river from floods.

The WRD already began the construction of a 1.5-km-long retaining wall to protect Krishna Lanka and its neighborhood. Now, it is planning to construct a retaining wall from Kanaka Durga Varadhi to Padmavati Ghat, and another from Prakasam Barrage to Bhavanipuram.

According to information, the retaining wall from Varadhi would cost Rs.129 crore and the other one Rs.6.23 crore.

The department has sent the proposals for government clearance. People living in two municipal wards would benefit from the retaining wall from Varadhi while the one near Bhavanipuaram would be helpful to the fisherfolk living on the river bank.

The retaining walls were expected to withstand even 12 lakh cusecs of flood, the WRD officials said.

The department has taken up the retaining wall project to protect the people living in the low-lying areas of Ranigari Thota, Bhupesh Gupta Nagar, Taraka Rama Nagar and other localities of Krishna Lanka prone to flooding. The project cost is estimated at Rs.122.90 crore.

The retaining wall project started way back in 2011 but was set aside for a few years due to a lack of funds. Now, the works on the retaining wall up to Koti Nagar are going on at a brisk pace.

The localities on the banks of the Krishna in Vijayawada get inundated during the monsoon floods every year. The local people have been demanding that a retaining wall should be constructed along the bank to prevent the floodwater from entering the Krishna Lanka and other areas, for more than a decade.

“The Vijayawada Municipal Corporation (VMC) has to set up rehabilitation centers until the flood waters recede. The retaining walls are expected to address the problem,” officials said.

How Much Does Lawn Aeration Cost? Breaking Down the Cost To Aerate a Lawn