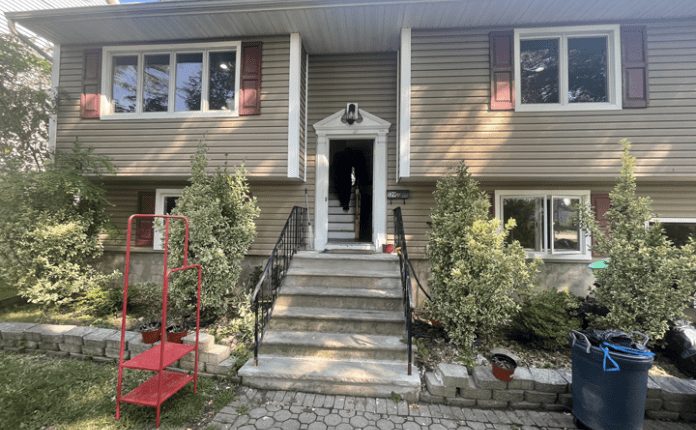 That was the beginning of a three year nightmare for the Elvin Family.

The family lost their entire belongings in the fire. The family was staying at the Hilton Hotel for the first few nights, then took up residency at the Residence Inn for a month, (now Sonesta ES Suites) 3 Gatehall Drive. Then our first house rental for less than a year (about 10 months) and then the family moved into a home on Halsey Road, close to their home on Allentown Road. This enabled the children to attend the same schools and be close to their friends.

“At the time of the fire, my son was a senior at PHHS, my daughters were in 6th and 8th grades. My son is now in college, my daughters will be a junior and my youngest a freshman at PHHS,” said Lisa Elvin.

“It has been a long, arduous journey for my family. We have seen the absolute best in people who have rallied and continue to rally for us and the absolute worst in people who showed no empathy and took advantage of our situation. I am most proud of my children who have shown such strength, kindness and adaptability in the face of adversity. We are glad we are finally going back to our own home,” said Elvin.

Last week, the Elvins finally got to move back into their home after many delays. 959 days from the day of the fire until the home was finished to live in.

Yuliano Landscaping and their employees helped the Elvin family move their belongings from Halsey Road back to their original home on Allentown Road.

The renovated home on Allentown

Louis Yuliano, Jr., said “As a long time Parsippany resident, me and my employees were happy to help the Elvin’s move. It’s been a long road for them. Many things changed in their lives. When we heard their home was refurbished and ready to move in, we stepped up and supplied our employees and vehicles to make their move easy. We are always happy to help our neighbors.”

In addition, on December 7, 2019, Parsippany Focus, and its publisher Frank Cahill, reached out to former Mayor Soriano and asked if we could use town hall as a collection site. We asked the readers of Parsippany Focus to donate clothing and gift cards. The supply was overwhelming, that we had to stop collections. Lots of clothes were donated, that their temporary location at the hotel was filled with bags. Residents also donated gift cards to ShopRite, Walmart and other locations. Sons of Italy 2561 donated hundreds of dollars of Walmart Gift Cards to help the family buy clothing. (Click here to read original story)

Frank Cahill said “I made daily trips to town hall to pick up the clothing and items to bring to the Elvin family. The amount of donations were overwhelming. This is an example of the generosity of Parsippany. I also reached out to IHOP and arranged a “Dine to Donate” to raise additional funds. Crunch Fitness held two group fitness classes to raise money for the family. It is truly “Neighbors helping Neighbors.”

IHOP Parsippany arranged a “Dine to Donate” for the Elvin family and raised over $1,000.00. (Click here to read original story)

Lisa said “I’d like to thank the people of Parsippany who have been rooting for us. We really love this town, more than ever.”

When the fire was still smoldering, contractors and public adjusters tried to solicit business from Elvin at the site, she said. In the days that followed, she hired two of them.

Elvin is in a battle with two banks, her insurance company, the contractor’s estate and the public adjuster she hired. She’s paying out-of-pocket for a new contractor to work on the home while she remains in a rental with her kids — paying both rent and her mortgage — and the home is only 70% complete more than 18 months after the fire, she said.

Elvin said she met the representative of a public adjuster firm the night of the fire. The company would help her navigate insurance payments, contractors and other issues related to fixing her home, she said she was told.

At first, everything seemed to be moving along, however slowly, she said.

Her insurance company, Plymouth Rock, distributed three checks to the public adjuster firm on January 14, 2020, documents show. The first, for more than $32,000, required endorsement by Elvin and the public adjuster. The two other checks, for $90,000 and $99,000, were supposed to be endorsed by Elvin, the public adjuster and Bank of America, Elvin’s mortgage company.

Elvin said she never saw the three checks, but she didn’t realize there was a problem because work was getting done by Hometown Restoration of New Rochelle, NY, the general contractor Elvin hired.

Then in October 2020, Thomas Keith, Hometown’s owner, died. Subcontractors for Hometown stopped getting paid and work on the home stopped the next month, Elvin said.

That’s when Elvin realized something wasn’t right. She started to follow the paper trail.

A letter from the public adjuster firm to Hometown dated January 27, 2020, with the three checks enclosed, instructed Homestead to get the checks endorsed by Elvin and her mortgage company, documents show.

Elvin later received copies of the insurance checks that were deposited into Hometown’s account at Chase. She said someone else signed her name on the checks. It wasn’t her, she said.

Bank of America told Bamboozled that it didn’t endorse the checks, either.

For months, Elvin has been trying to get Chase, which accepted and cashed the checks, to send the money back to Plymouth Rock or to its bank, Citibank, based on emails and documents reviewed by Bamboozled.

She’s attempted to get Citibank to follow up with Chase, and to get Plymouth Rock to issue new checks and then fight it out with the banks, but that hasn’t worked, either.

And Hometown Restoration, the deceased contractor’s company, has filed for bankruptcy.

“Where are the consumer protections?” Elvin said. “The monies should be returned to me by my insurance company and/or the banks involved in the transaction. These related parties are not being held accountable even though they hold a fiduciary role.”

She hired an attorney who, in addition to talking to the parties on Elvin’s behalf, sent an inquiry to the Department of Banking and Insurance (DOBI).

“It appears that an investigation against the Public Adjuster is also warranted,” DOBI said in a letter to Elvin’s attorney.

The attorney also contacted Travelers, the company holding the public adjuster’s bond, which is worth only $10,000, asking it to pay up because of an alleged “breach of the contract and failure to abide by the Public Adjuster Licensing Law of New Jersey.”

That request is still in progress.

No one wants to take responsibility, Elvin said, noting that in December 2020, after the contractor’s death, representatives from Plymouth Rock and contractors sent by Hometown agreed at a meeting that only about 27% of the work that was paid for was completed.

“Without anybody doing the right thing, the only recourse we have is legal, which takes time and my family wants to go home now,” Elvin said. “We cannot afford not to go home now.”

She asked Bamboozled for help.

Chase, the contractor’s depositing bank, basically said it was too late, explaining that there is a 30-day deadline to report fraud, but it received the claim 11 months after the deposit.

“We reached out twice to the other bank to see if there was something we could do,” spokeswoman Briana Curran said. “Given the contractual deadline and the fact that we didn’t hear back from the other bank, we have denied the claim.”

But Elvin, and by extension Plymouth Rock and Citibank, didn’t know a fraud had allegedly occurred until the contractor died and the work stopped, long after the checks were cashed.

Citibank said it “engaged in discussions with relevant parties to provide the requested information,” noting that as the non-depository bank, it is “limited” in its ability to provide reimbursement.

Plymouth Rock, when asked if it would reimburse Elvin and then fight it out with the banks, said it has worked closely with Elvin, including extending her living expense coverage past the one-year policy limit, and it said it is actively working with Citibank “to pursue the ongoing investigation.”

Elvin wasn’t happy with that response, saying the company hasn’t been proactive on her behalf. And, she said, the living expense payments ended in June.

“The reply we always receive is: `It is still under investigation,’” she said, calling the insurer “difficult, dismissive and non-responsive.”

According to court documents covering Hometown’s request of the court, Elvin’s claim is sixth in line behind the IRS, the New York State Department of Labor, two credit cards and an auto loan claim, giving her a shot at some kind of relief.

A liquidation plan should be set by the end of 2021, “with the court providing for a distribution of funds to creditors in order of priority as set forth in the bankruptcy code,” said Dawn Kirby, Hometown’s bankruptcy attorney.

Angry but not defeated, Elvin had a lot to say about her situation.

“Losing your family home is traumatizing. My three kids, who are now teenagers, grew up in that house,” she said. “We lost everything we owned including family heirlooms, keepsakes and lots of pictures. These items can never be replaced.”

“There is no understanding or empathy involved. It’s all business,” she said. “We still are not home. We just want to go back home.”