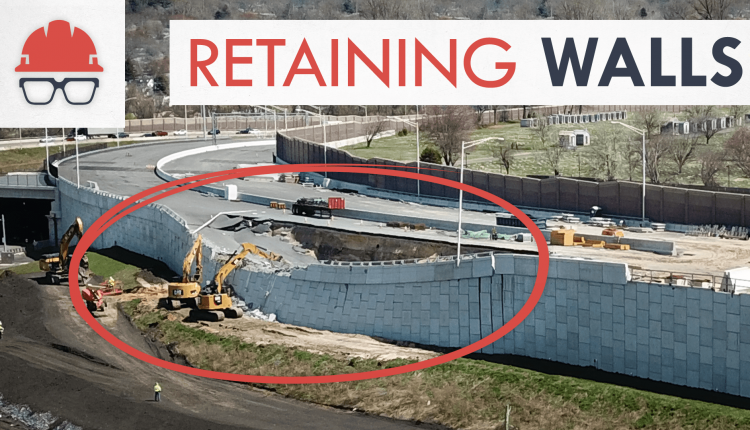 In March of 2021, a long-running construction project on a New Jersey highway interchange ground to halt when one of the retaining walls along the roadway collapsed. This project in Camden County, called the Direct Connection, was already 4 years behind schedule, and this failure set it back even further. As of this writing, the cause of the collapse is still under investigation, but the event brought into the spotlight a seemingly innocuous part of the constructed environment. I love innocent parts of the constructed environment, and I promise by the end of this you’ll pay attention to infrastructure that you’ve never even noticed before. Why do we build walls to hold back soil, what are the different ways to do it, and why do they sometimes fall down? I’m Grady and this is Practical Engineering. Today, we’re talking about retaining walls.

The natural landscape is never ideally suited to construction as it stands. The earth is just too uneven. Before things get built, we almost always have to raise or lower areas of the ground first. We flatten building sites, we smooth paths for roads and railways, and we build ramps up to bridges and grade-separated interchanges. You might notice that these cuts and fills usually connect to the existing ground on a slope. Loose soil won’t stand on its own vertically. That’s just the nature of granular materials. The stability of a slope can vary significantly depending on the type of soil and the loading it needs to withstand. You can get many types of earth to hold a vertical slope temporarily, and it’s done all the time during construction, but over time the internal stresses will cause them to slump and settle into a more stable configuration. For long-term stability, engineers rarely trust anything steeper than 25 degrees. That means any time you want to raise or lower the earth, you need a slope that is twice as wide as it is tall, which can be a problem.

Don’t tell them I said this, but slopes are kind of a waste of space. Depending on the steepness, it’s either inconvenient, or entirely impossible to use sloped areas for building things, walking, driving, or even as open spaces like parks. In dense urban areas, real estate comes at a premium, so it doesn’t make sense to waste valuable land on slopes. Where space is limited, it often makes sense to avoid this disadvantage by using a retaining wall to support soil vertically.

When you see a retaining wall in the wild, the job of holding back soil looks effortless. But that’s usually only true because much of the wall’s structure is hidden from view. A retaining wall is essentially a dam, except instead of water, it holds back earth. Soil doesn’t flow as easily as water, but it is twice as heavy. The force exerted on a retaining wall from that soil, called the lateral earth pressure, can be enormous. But that’s just from the weight of the soil itself. Include the fact that we often apply additional forces from buildings, vehicles, or other structures, on top of the backfill behind the wall. We call these surcharge loads, and they can increase the forces on a retaining wall even further. Finally, water can flow through or even freeze in the soil behind a retaining wall, applying even more pressure to its face.

Estimating all these loads and designing a wall to withstand them can be a real challenge for a civil engineer. Unlike most structures where loads are vertical from gravity, most of the forces on a retaining wall are horizontal. There are a lot of different types of walls that have been developed to withstand these staggering sideways forces. Let’s walk through a few different designs.

The most basic retaining walls rely on gravity for their stability, often employing a footing along the base. The footing is a horizontal member that serves as a base to distribute the forces of the wall into the ground. Your first inclination might be to extend the footing on the outside of the wall to extend the lever arm like an outrigger on a crane. However, it’s actually more beneficial for the footing to extend inward into the retained soil. That’s because the earth behind the wall sits atop the footing, which acts as a lever to keep the wall upright against lateral forces. Retaining walls that rely only on their own weight and the weight of the soil above them to remain stable are called gravity walls (for obvious reasons), and the ones that use a footing like this are called cantilever walls.

A common type of retaining wall involves tying a mass of soil together to act as its own wall, retaining the unreinforced soil beyond and this was actually the subject of one of the very first engineering posts. It’s accomplished during the fill operation by including reinforcement elements between layers of soil, a technique called mechanically stabilized earth. The reinforcing elements can be steel strips or fabric made from plastic fibers called geotextile or geogrid. It is remarkable how well this kind of reinforcement can hold soil together.

Gravity walls and mechanically stabilized earth are effective retaining walls when you’re building up or out. In other words, they’re constructed from the ground up. But, excavated slopes often need to be retained as well. Maybe you’re cutting out a path for a roadway through a hillside or constructing a building in a dense urban area starting at the basement level. In these cases, you need to install a retaining wall before or during excavation from the top down, and there are several ways to go about it. Just like reinforcements hold a soil mass together in mechanically stabilized earth, you can also stitch together earth from the outside using a technique called soil nailing. First, an angled hole is drilled in the face of the unstable slope. Then a steel bar is inserted into the hole, usually with plastic devices called spiders to keep it centered. Cement grout is added to the hole to bond the soil nail to the surrounding earth.

Both mechanically stabilized earth and soil nails are commonly used on roadway projects, so it’s easy to spot them if you’re a regular driver. But don’t examine too closely until you are safely stopped. These walls are often faced with concrete, but the facings are rarely supporting much of the load. Instead, their job is to protect the exposed soil from erosion due to wind or water. In temporary situations, the facing sometimes consists of shotcrete, a type of concrete that can be sprayed from a hose using compressed air. For permanent installations, engineers often use interlocking concrete panels with a decorative pattern. These panels not only look pretty, but they also allow for some movement over time and for water to drain through the joints.

One disadvantage of soil nails is that the soil has to settle a little bit before the strength of each one kicks in. The nails also have to be spaced closely together, requiring a lot of drilling. In some cases it makes more sense to use an active solution, usually called anchors or tiebacks. Just like soil nails, anchors are installed in drilled holes at regular spacing, but you usually need a lot fewer of them. Also unlike soil nails, they aren’t grouted along their entire length. Instead, part of the anchor is installed inside a sleeve filled with grease, so you end up with a bonded length and an unbonded length. That’s because, once the grout cures, a hydraulic jack is used to tension each one. The unbonded length of the anchor acts like a rubber band to store that tension force. Once the anchor is locked off, usually using a nut combined with a wedge-shaped washer, the tension in the unbonded length applies a force to the face of the wall, holding the soil back. Anchored walls often have plates, bearing blocks, or beams called walers to distribute the tension force across the length of the wall.

One final type of retaining wall uses piles. These are vertical members driven or drilled into the ground. Concrete shafts are installed with gigantic drill rigs like massive fence posts. When they are placed in a row touching each other, they’re called tangent piles. Sometimes they are overlapped, called secant piles, to make them more watertight. In this case, the primary piles are installed without steel reinforcement, and before they cure too hard, secondary piles are drilled partially through the primary ones. The secondary piles have reinforcing steel to provide most of the resistance to earth pressure. Alternatively, you can use interlocking steel shapes called sheet piling. These are driven into the earth using humongous hammers or vibratory rigs. Pile walls depend on the resistance from the soil below to cantilever up vertically and resist the lateral earth pressure. The deeper you go, the more resistance you can achieve. Pile walls are often used for temporary excavations during construction projects because the wall can be installed first before digging begins, ensuring that the excavated faces have support for the entirety of construction.

All these types of retaining walls perform perfectly if designed correctly, but retaining walls do fail, and there are a few reasons why. One reason is just under designing for lateral earth pressure. It’s not intuitive how much force soil can apply to a wall, especially because the slope is often holding itself up during construction. Earth pressure behind a wall can build gradually such that failure doesn’t even start until many years later. Lots of retaining walls are built without any involvement from an engineer, and it’s easy to underestimate the loads if you’re not familiar with soil mechanics. Most cities require that anything taller than around 4 feet or 1.5 meters be designed by a professional engineer.

As I mentioned, soil loads aren’t the only forces applying to walls. Some fail when unanticipated surcharge loads are introduced like larger buildings or heavy vehicles driving too close to the edge. If you’re ever putting something heavy near a retaining wall, whether it’s building a new swimming pool or operating a crane, it’s usually best to have an engineer review beforehand.

Water is another challenge with retaining walls. Not only does water pressure add to the earth pressure, in some climates it can freeze. When water freezes, it expands with a force that is nearly impossible to restrain, and you don’t want that happening to the face of a wall. Most large walls are built with drainage systems to prevent water from building up. Keep an eye out for holes through the face of the wall that can let water out, called weepholes, or pipes that collect and carry the water away.

Finally, soil can shear behind the wall, even completely bypassing the wall altogether. For tall retaining walls with poor soils, multiple tiers, or lots of groundwater, engineers perform a global stability analysis as a part of design. This involves using computer software that can compare the loads and strengths along a huge number of potential shearing planes to make sure that a wall won’t collapse.

Look around and you’ll see retaining walls everywhere holding back slopes so we all have a little more space in our constructed environments. They might just look like a pretty concrete face on the outside, but now you know the important job they do and some of the engineering that makes it possible.