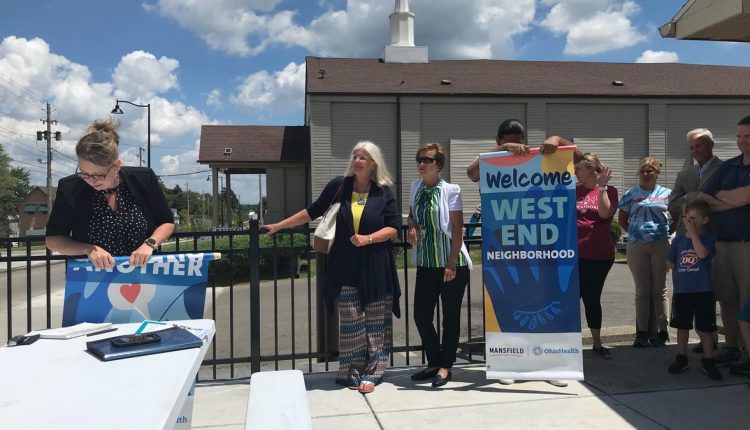 Community leaders are celebrating the completion of the first phase of construction of Mansfield’s West End improvement project, with a ceremony held Tuesday outside The Dairy Queen at Glessner Avenue near the OhioHealth Mansfield Hospital.

If you haven’t been down Glessner Avenue lately, there are new sidewalks and many more improvements beautifying the area heavily traveled by many to the hospital and other businesses.

Adrian Ackerman, director of Mansfield Community Development and Housing, updated the crowd on what changes have been made, current progress toward continuing the plan and further needs and goals.

Community leader Chuck Hahn said the city is starting to see things come together here and in the rest of the city.

Jon Young, who owns property on Glessner Avenue, said he has buddies who kid him that you can do all the beautification you want but how are you going to beautify the neighborhood?

He said that in the area around The Dairy Queen, businesses have always had great harmony and everybody works together.

“I started to make some new investment in my building and the neighbors get along just fine,” he added.

An opportunity to change the neighborhood

Yates said he expects this corridor to be something that everybody in the community can be proud of.

He thanked Sharon May for her past work in community development and working with him and the city to focus on one area instead of multiple projects throughout the city; and he lauded Ackerman for her efforts in executing the project.

“Then the idea had to be sold to Council, and it was concentrating on one area and expanding it out a mile and so forth,” the mayor said.

“It all started with ‘Let’s concentrate the money with one spot and let it build out,'” Theaker said.

Ackerman said several properties were purchased along the corridor.

“There were two homes at Blymyer and Glessner that were purchased and demolished using private funds in the name of this project, in the hopes that this helps, Ackerman said. She said the Fusco Dry Cleaner business has been purchased and is in the midst of There is also a triplex being renovated.

She said an owner across from The Dairy Queen is going to paint the brick house to coincide with the new (brick) retaining walls put in through the project.

“It’s really doing a lot that we hoped for, the accessibility is there and the safety with the street lighting and of course spurring that private investment,” she said.

She said Phase II is in progress for six weeks now.

Costs are being determined. Engineering and architecture are next for the remainder of Glessner Avenue. It may take 18 months to put that piece together, she said.

She said there are going to be three phases from The Dairy Queen to Marion Avenue, from Arthur to Mulberry and Mulberry to Main.

Ackerman said the funding is next.

“This is not going to be a cheap project. We did not skimp on anything,” she added.

Rough estimates for engineering and architecture could be up to $400,000, with construction in the $4 million range, Ackerman said.

“We do have a long road ahead of us. As HUD funding tricks in we do plan on using that,” Ackerman said.

Banners and flower pots are set to go up along each light pole.

Podcast: The History Of Stone Walls