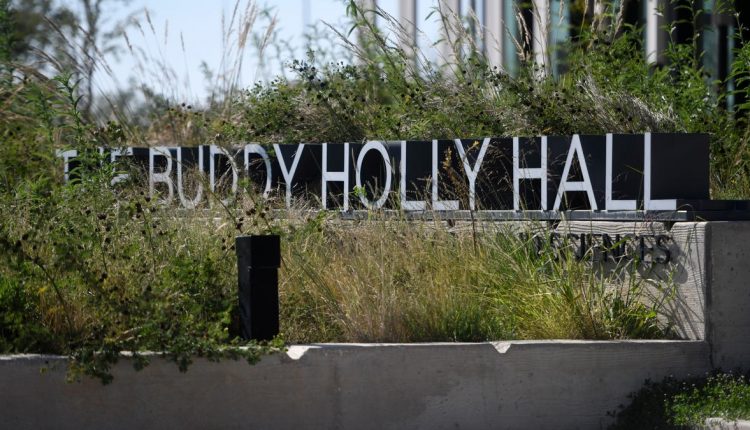 Why the landscaping at Buddy Holly Hall looks like that

Since its completion in fall 2020, the tall, grassy landscaping at Buddy Holly Hall of Performing Arts and Sciences has drawn a few critics for its prairie-like aesthetic. Some, including a few local radio stations, have evoked the city’s tall weeds ordinance in criticizing the landscaping.

With the landscaping often mistaken for overgrown weeds, the leaders of the project want it known that this appearance was very much intentional.

“Really, this landscape was a really unique opportunity, because the vision for the Buddy Holly Hall was that it was going to celebrate everything about who we are as Texans on the High Plains,” said Chad Davis, the landscape architect who led the project outside what’s become one of Lubbock’s most prominent buildings.

Davis said the hall had hoped to represent the communities in which it receives its greatest supporters.

Made up of more than 11,000 plants, seeded wildflowers and grasses, the landscaping consists of only plants that are native to the High Plains, Trans-Pecos and Rolling Plains, Davis said.

“Culturally, we really wanted to celebrate who we were,” Davis said. “We felt like this celebrated the landscapes where visitors would be coming from.”

Additionally, a product of the xeriscaping concept — the name coined for the form of landscaping that reduces natural resources — Davis noted that it was intentional to use hardy, drought-tolerant plants, because they save on irrigation and can better withstand Lubbock’s unpredictable climate.

During the harsh winter storm in February 2021, Davis said the hall only lost about 5% of its plants when others with non-native plants lost between 50% and 80% of their landscaping.

“We were nervous, but the beauty of our natives is that the natives can withstand the highs up to 105 and withstand lows to minus-5 for several days at a time,” Davis noted.

“Not to mention, right in the middle of an asphalt jungle, we’re already seeing songbirds populate the site; migrating hummingbirds are visiting; bees are there; and the butterflies are there on their migration,” he added.

“I think their hearts were in the right place,” Baliga said. “(When implementing xeriscaping), there’s got to be the balance of using native plants, but using them in a way that people want to look at them — and it’s especially challenging in such a high-profile place. “

While he doesn’t criticize it in the same way that some Lubbock residents have, he said he personally would’ve created a really dense, lush landscape that incorporated more trees, such as desert willows and crepe myrtles.

Plus, xeriscaping takes time to establish, he said, so it’s important to recognize that it’s not yet in its final phase.

“I see what they’re going for, and I think long-term, it’ll turn into a really nice landscape,” Baliga said.