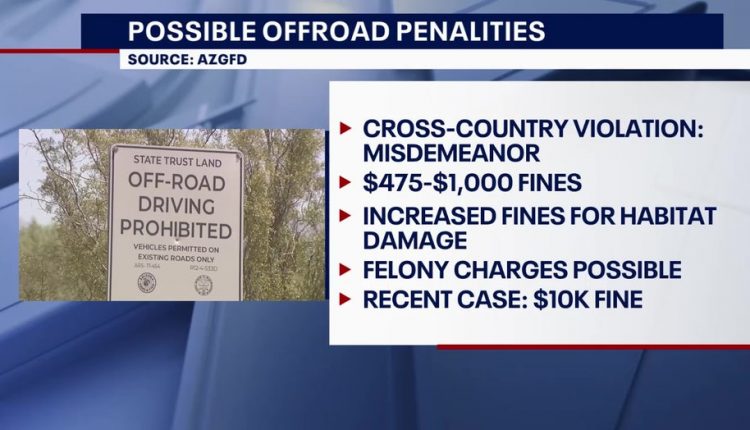 Tune in to FOX 10 Phoenix for the latest news:

The COVID-19 pandemic changed a lot, including the landscape of some of the most serene and sacred parts of Arizona’s desert.

Arizona Game and Fish Department (AZGFD) says during the pandemic, more and more people ventured outside, many on off-road vehicles. While some were off-roading the right way, too many people did not, and some are still not following the rules.

We take a look at why this is having devastating consequences on the state’s beautiful landscape.

Where there’s not a designated trail or road, that’s not stopping hundreds of thousands of motorbikes, jeeps and four-wheelers from exploring an area.

According to the department, road proliferation is a major problem. Almost anywhere you look in the state, you can see new roads that have been created by these vehicles.

Once tire tracks are laid, everyone follows.

“If you go back to 2020 at the height of COVID and the lock downs, we saw unprecedented use on the forest,” White said. “It was a new group of users on the landscape and these people didn’t seem to know. They don’t have a land ethic, they didn’t seem to know that there were rules out in the middle of nowhere that you had to stay on roads, you know. That you couldn’t drive like a maniac, that there are rules to riding these machines.”

“They run into cattle, you can’t keep a gate together for less than a month and it’s all twisted up and broken,” says Andrew Parry who works for a rancher in the Cottonwood Canyon area.

Gates, equipment, and salt blocks for cattle are destroyed and found in pieces, Parry says, adding that cattle have been hit and killed by speeding off-roaders.

The destruction is widespread.

Video was captured by an AZGFD camera west of Sedona in Bear Mountain where Deanna Bindley lives.

“The blatant disregard, the speeds, the recklessness. There were people two weeks ago right here on the main road ripping donuts right on the main road with people around and cars. It’s absolutely disgusting,” she said.

Bindley says the noise from the machines is destroying the quality of life for residents in the area, terrifying animals and killing the habitat.

“Probably the biggest problem we have with the OHVs tearing up and down our forest service road is all of the dust they create. These machines, even when they are going, lets say 20 miles an hour, they’re creating very large dust clouds and plenty of them are going 40 and 50 miles an hour. We have a significant dust problem and what’s happening is that dust is covering all of our roadside trees, our juniper trees, and killing them,” Bindley said.

“Out here in the middle of nowhere, we don’t have speed limit signs and so people take that to mean that you can drive as fast as you want, and that’s not the case,” White said. “It’s illegal to drive cross-country where it’s prohibited by rule if you’re driving cross-country that’s a criminal violation. If you’re causing habitat damage, that’s also another criminal violation, and if you’re destroying native plants you can be civilly assessed the value of those plants and that can get really expensive depending on the amount of damage, the amount of destruction that you’re causing.”

The cost of the fine can increase substantially if you cause habitat damage. According to AZGFD, a recent case was deemed a felony because of the severity of the damage, and the rider was ordered to pay $10,000.

However, enforcement of these laws will only go so far. They need the community and the riders to take responsibility.

That’s where Jay Hoff, the owner of Desert Dog Off-Road, comes in.

“Unlike traditional road driving, there really hasn’t been any kind of training for people to drive off-road but there is, you know, a courtesy level of driving habits that should be adhered to out there. Staying right on the trail, using moderate speed when coming around corners, understanding how a vehicle needs to get up a hill and down a hill,” Hoff said.

He provides maintenance for these vehicles, as well as tours.

“Staying on the trails, staying to the right, being a cautious driver, being a good steward of the environment, these are all things that people should all consciously do so that we can continue to enjoy what we have here,” he said.

More closures in the future?

White says if the problem doesn’t stop, he’s concerned land management agencies will be forced to make closures. Desert Wells in La Paz County has already been closed because of off-road vehicle damage and more restrictions will follow.

It might be the only way to save our land.

“I appreciate this. I didn’t think this was ever going to happen,” Parry said.

AZGFD wants everyone to enjoy Arizona’s beautiful land but will investigate reports of behavior that destroy it.

In Arizona, all off-road vehicle operators are encouraged to complete a safety education course before hitting the trails. This is hands-on training for licensed drivers 16 and older conducted by certified AZGFD instructors.