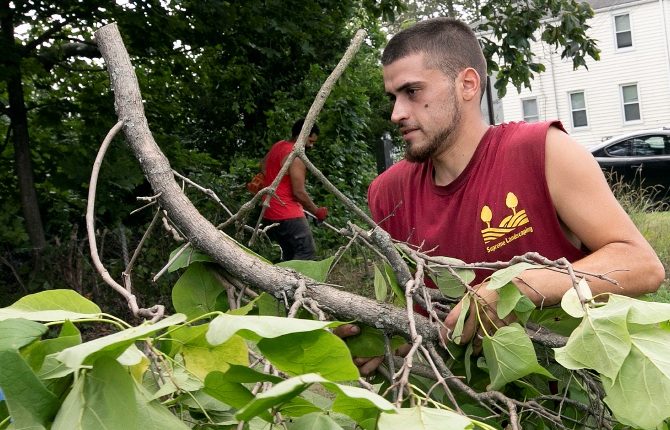 The “and more” also includes bilingual service. Perez’ family is Puerto Rican and he is fluent in both English and Spanish.

At his previous job on a landscaping crew, Perez, who is also a Meriden resident, remembers being a translator and informal “middleman” between clients and Spanish-speaking workers. Now, Perez uses both his language and landscaping skills to grow his own business.

“Being bilingual, I’m able to take on like double the clientele,” he said.

“English people don’t want to get someone that only speaks Spanish because they can’t communicate what they want exactly done on their lawn,” he said.

Perez did not always want to be a professional landscaper. Before he owned a business, Perez said he managed at several fast food and retail locations, but wanted to leave. He applied online to a landscaping company and was hired as a crew member.

“I wanted to pursue something that I actually enjoyed, but I didn’t know what it was,” he said in a phone interview. “I just put in an application to get myself out of fast food and then I ended up in a career that I actually really liked.”

At first, he was nervous about the physical labor, but said he grew to like the hard work and being outdoors, despite inclement weather conditions.

“Seeing the transformation in the properties is just amazing to me,” he said. “I don’t like being inside of a building all the time.

When he decided to start his own landscaping company, Perez said he got a bank loan and paid an additional fee to hire an agent to help with taxes and other paperwork.

Despite having experience mowing his own lawn and shoveling snow, Perez learned many skills from a foreman at his previous landscaping company. He also traces his expertise to friends with technical skills, and his stepfather, in addition to a series of YouTube videos. Now, as the foreman, Perez passes the skills on to his workers and two 17-year-old trainees.

Meriden resident Adrián Perez has worked for Supreme Landscaping for two years. No relation of Jonathan, he said he did not have a landscaping background and learned a lot of landscaping skills from Jonathan.

“Hey [Jonathan] started out by showing me how to do mowing and stuff at his house. He always says that you have to train before you are allowed to do any jobs,” Adrián Perez said in a phone interview.

The first year in review

As many businesses moved online during the pandemic, social media became a way to attract new clients. Supreme Landscaping is no exception. Perez said he attracts many new clients through his social media channels; a mixture of before/after shots of landscaping projects, baby content, and couples’ challenges.

“For being a new landscape company, Jay and Supreme Landscaping have a bright future. He has already picked up a few customers in my neighborhood and I suspect that will continue,” he said in a Facebook Messenger interview.

Viger is also treasurer of the Meriden Little League. Viger said that Perez tended the league’s five fields at the Ed Walsh Complex at 70 Overlook Road

“Jay and his team did such a phenomenal job there, we [the little league] provided them a yearly contract to get our fields in playable condition, prior to our Spring and Fall seasons,” he said. “His work speaks for itself and his work ethic is impeccable.”

Moving forward, Perez hopes to add power washing and a new location to the “and more” section of services.

Latino Communities Reporter Lau Guzmán is a corps member with Report for America, a national service program that places journalists into local newsrooms. To learn more about RFA go to www.reportforamerica.org. Guzmán can be reached at lguzman@record-journal.com. Twitter: @lauguzm_n