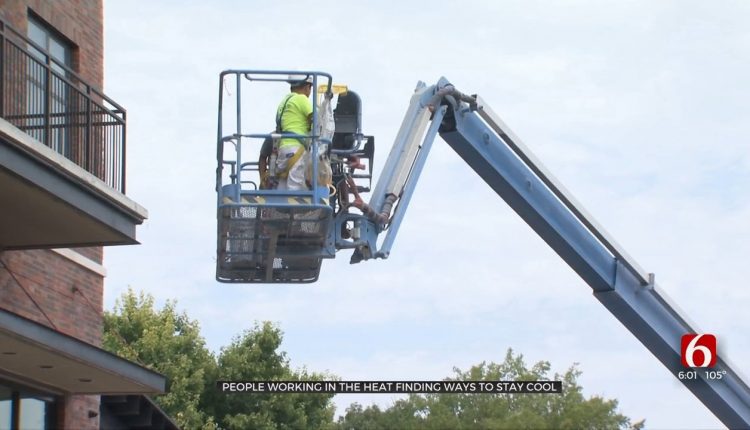 For so many across Green Country, going to work means spending the day outside, battling oppressive heat for hours.

At a new apartment building in the Pearl District, a construction crew is hard at work despite the heat wave.

For Little, and the rest of the crew he works with, there was an ounce of relief Wednesday morning.

“We did have a few drops of rain. That was a blessing,” he said.

In between cutting bricks and getting paint jobs done, Little said they are taking breaks and drinking water. He said taking care of himself at home, by getting ready for the next day’s work, is important too.

“Staying in the cool air, eating light foods like chicken and tuna and stuff like that,” Little said.

He said they get an early start to the day and try to wrap up their work by 2:00 pm, so they’re not in the heat all afternoon.

A landscaping crew from Perfection Outdoor Solutions braved the blazing heat on Wednesday too.

Orozco is looking forward to winter, not just for the cooler temperatures, but for a new baby, due in February. That’s what keeps him going day after day in the sun.

“My motivation is my mom, and a kid I got on the way,” he said. “And I have that in mind and it always keeps pushing me forward and not giving up especially in this heat.”

After 56 years in landscaping, 88-year-old keeps own dream garden