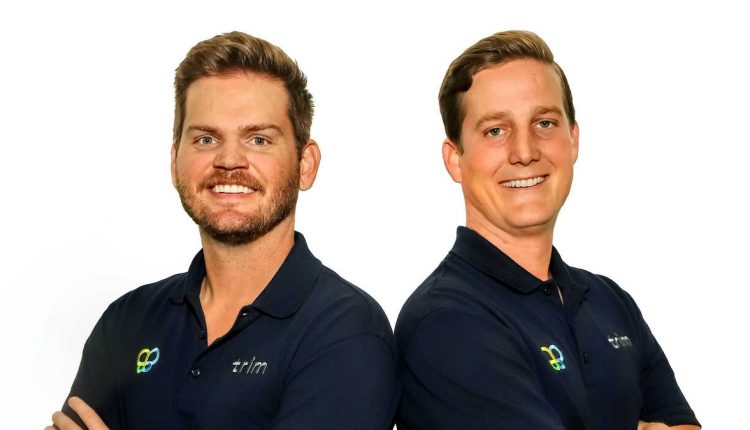 For years, these longtime friends talked about starting a business together.

But when Ben Souva and Jacob Krum followed their entrepreneurial spirits with their service business Trim Landscaping, it boosted other budding entrepreneurs’ ventures as well.

Making connections between landscaping contractors and homeowners has stayed at the core of Trim since it launched in 2020 as BJ’s — the first initials of the owners’ names — Landscaping. Souva and Krum rebranded their Phoenix business as Trim Landscaping this summer.

Trim’s proprietary platform and business model handles the matching of landscapers with jobs, scheduling, billing and customer service. The goal is a seamless and consistent experience for both sides.

“A lot of the guys didn’t really know how to run their own business. We can run their business for them and all they need to worry about is showing up on time and doing the job,” Krum said.

When the company first started it averaged 20 jobs a month, Krum said. Today, it averages more than 4,000 jobs a month consisting of recurring projects and one-offs.

It also specializes in a single-family residential homes segment that accounts for 62% of landscaping customers across the country, according to industry resource Lawn and Landscape.

Residential single family homes are Trim’s niche. So is partnering with who Krum called “solo-preneurs” — basically a landscaper with a truck. They wanted to help the estimated 40,000 landscapers in the Valley increase their revenue.

‘They keep us very busy year round’

When Manny Rodriguez first teamed with Trim a year ago, the Mesa landscaper had a team of three and relied purely on word-of-mouth. Since then, Rodriguez has doubled his staff with two three-man crews to service all ends of the Valley.

Rodriguez likes Trim’s platform that lets him know what jobs are on his schedule a few days in advance and whether they will require specific tools or equipment so he is prepared.

“It really helped us open our minds and use the technology. Before, we were just not open minded to that, we were just old school. But when Ben introduced us to it, it’s a day and night transformation,” said Rodriguez, who has seen a significant increase in revenue since partnering with Trim. “You know what you’re going to be making and the work is steady. They keep us very busy year-round.”

In prior experiences, Rodriguez, who started his business four years ago, said other companies that serve as the intermediary aim to please the homeowner. For example, if Rodriguez went to a job and discovered it would take much more time and work than expected, other companies would tell him to do the job and they will “take care of it later.” However, with Trim, in this situation, Rodriguez is told not to do the job and the Trim team handles it from there.

“They really listen to us out in the field. We do the work because we want to do it and they send us to do it and it is top notch,” Rodriguez said. “They are phenomenal. Trim Landscaping has really given us that freedom of work that’s consistent and I appreciate that very much.”

Krum was 10 and Souva was 8 when they met about 20 years ago. Krum played Pop Warner football with Souva’s brother and their parents are close friends. They’ve maintained a close friendship since.

Krum graduated from the Sandra Day O’Connor College of Law at Arizona State University and had owned a gym and AirBnB. His entry into entrepreneurship was successful and so he decided to put the lawyer track on hold.

Souva earned his technology and entrepreneurial degree from ASU and was working for a job recruiting company, climbing the ranks before partnering with Krum.

Krum and Souva pondered their business possibilities and kicked around several ideas. But when Souva had landscapers who did good work but had trouble with scheduling, billing or showing up on time — or at all — that planted a seed.

“We saw landscapers all over. We thought we could help them have more fulfilling careers,” Souva said.

Their mutual business experiences told them technology could do this. It led to Trim’s current business model and platform.

They found a route that was for sale by an independent landscaper who was retiring. It had 20 accounts. They bought the route and an old truck and headed out. At first, they enlisted a friend to do the labor but a month later he didn’t show. It left their new business scrambling to service the jobs on the schedule.

They posted the jobs on a classified ad website and found someone willing to do it. That’s when the seed started to sprout.

“We thought it was pretty easy and thought we could do this 100 times over,” Krum said.

Trim is part of a global landscaping market that generated $114.6 billion in 2021, according to Statista.

In addition to Phoenix, Trim has a presence in 16 cities including Tucson, Las Vegas, Denver, Tampa and several in Texas.

Putting a new focus on contractors

Focusing on the landscaping contractor rather than the homeowner has proved successful. This includes a proprietary pricing model that allows them to maximize landscapers’ profits, Souva said.

“(Most of) the companies in this space have traditionally owned the relationship between homeowners and contractors and have been focused on satisfying the homeowner, typically through price, and built their business on the backs of solo-preneuers,” Souva said.

Souva talked about one contractor that was living paycheck to paycheck and now makes $6,000 a month. He started out solo and has since hired a small staff.

Staying true to the mission is key to generating success for all.

“Our mission is to help these guys as much as possible,” Krum said. “Others try to come into this space to do what we do, but they squeeze (the contractor). But if we treat them like gold, they can grow as much as they want.”

Souva added, “At the end of the day, we want to help a lot of guys make a hundred grand a year. It gives me chills all over my body.”

factoid: The global landscaping market generated $114.6 billion in 2021, according to Statista.