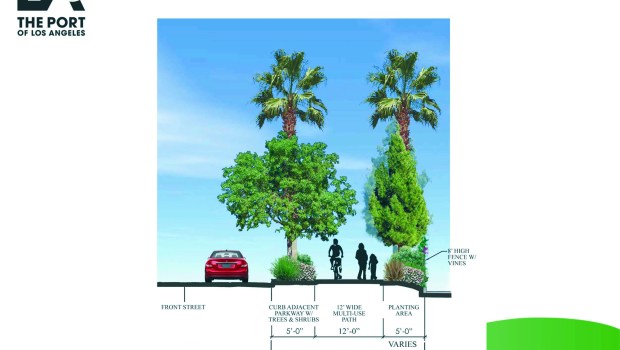 San Pedro’s Front Street connects to Harbor Boulevard at the Vincent Thomas Bridge, curves around Knoll Hill and ends at Pacific Avenue — but it isn’t much to look at.

The roadway features largely an industrial landscape, with views of the China Shipping Terminal and stacked shipping crates.

But the street is finally going to see a long-planned beautification effort get underway.

The Los Angeles harbor commission approved the contract for the $5.6 million project this week, and the work is expected to begin in mid-January. Over the course of about a year, the project will create a pathway with pedestrian lighting, landscaping and irrigation.

A long-awaited beautification and landscaping project on San Pedro’s industrialized Front Street is set to begin construction in January 2023. (Courtesy The Port of Los Angeles)

The project will construct a 22-foot-wide landscaped area with a multiuse path along the north side of Front Street, adjacent to the China Shipping Terminal, according to the board report description.

A landscaped gateway area will be constructed at the northeast corner of Front Street and Pacific Avenue.

The Griffith Company of Santa Fe Springs was selected as the qualifying bid.

“This project has been on the books for many years,” said Tony Gioiello, deputy executive director of Development at the Port of LA

The port was willing to provide renewed presentations for the area’s neighborhood councils if needed, Gioiello said.

“I get asked a lot about this in the community,” Commissioner Anthony Pirozzi said during the Thursday, Oct. 20, commission meeting.

The project will be coordinated with another in the same vicinity, a $70.5 million overhaul of the interchange that connects the Vincent Thomas Bridge, Front Street and Harbor Boulevard to the 110 Freeway.

That effort, slated to begin next summer, has been on the drawing board for years and is expected to bring some much-needed traffic flow relief at San Pedro’s northern waterfront.

The Los Angeles Department of Transportation is currently working to install underground cables for that separate interchange project.

The busy — and often confusing — interchange now sends cars and port trucks alike off the freeway to the Vincent Thomas Bridge toward Long Beach, but also onto Harbor Boulevard, bordering some of the busiest terminals in the Port of LA

in June, the Los Angeles Board of Harbor Commissioners accepted $41.22 million in grants from the Los Angeles County Metropolitan Transportation Authority for the interchange project.

Engineers have also said that new project will help extend the life of the aging Vincent Thomas Bridge, which opened in 1963, as traffic is expected to continue increasing.

Sign up for The Localist, our daily email newsletter with handpicked stories relevant to where you live. Subscribe here.

How to clean artificial grass in four easy steps