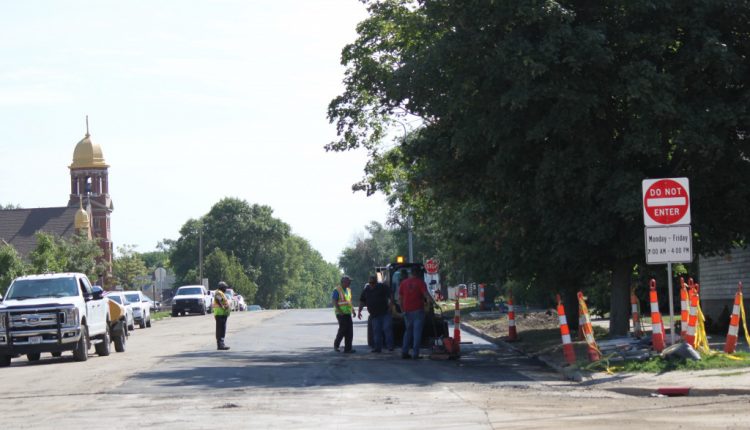 It was a busy day for a lot of people in Redfield today. Parents getting their children off to their first day school, children getting introduced to their new classrooms as well as their teachers.

As the excitement and anticipation of the new school year was happening on the inside of the school, there was also a lot of work being done around town on the outside. As fall draws near, projects are being completed or nearly completed.

The streets by the school, the north and south side were having asphalt laid. It is about 90% competed by the school.

SBS Lumber & Hardware have their new building for lumber storage being built and they will also have a lien-to added on the south side of their building for added storage as well. Binger Homes and Remodeling was hard at it getting this project closer to completion.

City Hall was having a new roof installed. It was completed today.

City & County workers were also getting their hands dirty. There were potholes being filled in and asphalt being laid on roads. Manholes were also being checked.

If you were driving on 7th Ave by the Sheriffs Department, you were busy getting the landscaping by the building completed.

Beginning at the Dollar Store down 7th Avenue was a line of those summer flowers all over the road. Some warranty work was being completed.

Seems like this time of year is always busy for everyone. Keep your eyes open for children and workers as there is not always easy to see when your traveling in a vehicle.