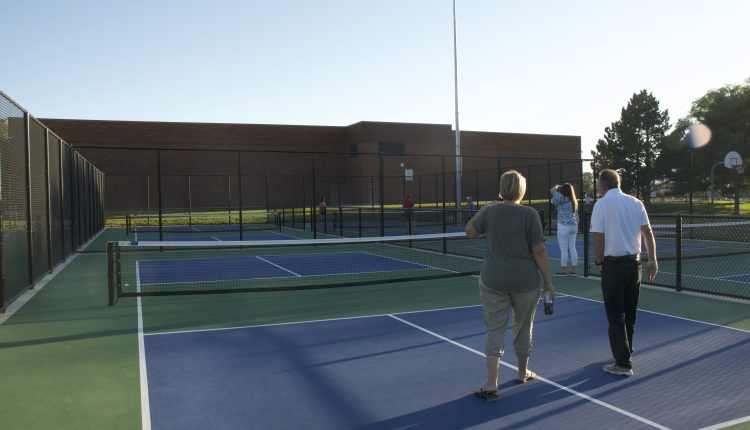 On a sunny evening in September, the Sandy City Council took a tour of recreation facilities and parks. They saw what upgrades are being done to help residents stay active while conserving resources.

According to its website, the Sandy Parks Department is implementing conservation practices like smart controllers, zone checks and regular water audits to reduce overall water consumption by 10%. Smart irrigation controllers adjust watering schedules in relation to weather, evaporation, and plant water use — instead of a timer. This means you’re less likely to see sprinklers operating in the rain.

With just one water-wise project, Sandy City saved 400,000 gallons of water last year. Thirsty grass was replaced with trees and shrubs in the median between the north and southbound lanes on 1300 East between 9400 South and 11000 South. Perennial plants like Russian sage still require water — just less of it. They’re also good for honeybees and other pollinators.

Crescent Park, located at 11150 Vista Way near Crescent View Middle School, also got an upgrade. One section of grass was removed and replaced with a rockscape. Where once there was turf, now there are small rocks and shrubs with some larger boulders that are perfect to lean on.

Just east of the rockscape are newly-resurfaced pickleball and tennis courts.

“No one played on these tennis courts two years ago,” said Dan Medina, the director of parks and recreation for Sandy City.

They were being used that evening. Also packed were the baseball diamonds, where an adult softball league was playing under newly installed lights. The lights are activated by a button and turn off automatically after a set amount of time, which will use less electricity.

“The LED lights will typically save a minimum of 50% for energy and maintenance cost of the HID lights that we are replacing,” Medina said. “The lights have a warranty and the court won’t need resurfacing again for 15-20 years.”

Pickleball is a popular sport that combines elements from tennis, badminton and ping-pong. It’s played at a slower pace than tennis, so people of more ages and abilities feel comfortable playing it. Sandy has 17 pickleball courts distributed across Crescent, Dewey Bluth, Alta Canyon and Flat Iron Mesa parks.

Aside from the courts, Sandy’s parks offer a variety of opportunities for sports, including soccer, baseball, basketball and volleyball; as well as other types of recreation, like splash pads and a skate park.

Sandy has 46 parks, which works out to be one park for every 2,000 residents. Seventy-two percent of Sandy residents live within a 10-minute walk of a park, according to The Trust for Public Land, a national parks and land conservation organization. In neighboring Midvale, only 36% of residents live that close to a park.

A network of walking/biking trails is another way for Sandy residents to build recreation into their lives.

In September, Sandy City held a ribbon-cutting ceremony for the completed Porter Rockwell Trail. The trail now extends from Pioneer Avenue in Historic Sandy to the Kimballs Lane TRAX Station in Draper.

5 Tips For Landscaping Your Long And Narrow Garden