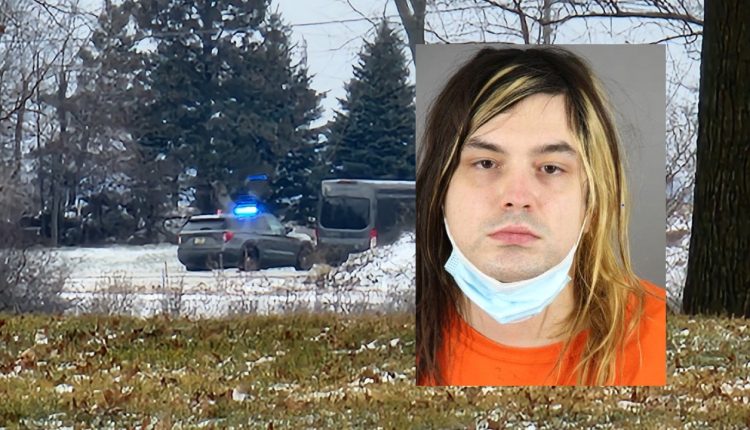 It happened near Washington Avenue (Highway 20) and North Britton Road in the town of Dover Friday, Dec. 16

According to the Racine County Sheriff’s Office, just after 10 am, deputies were dispatched to the area for a man actively assaulting two individuals, possibly with a brick. The suspect was identified as Bradley Kubisiak of Muskego, who was staying in the area. Officials say Kubisiak has a lengthy and violent criminal history.

A sheriff’s investigator was nearby and responded to the scene. He parked his patrol squad and approached the area on foot. Officials say the investigator observed evidence of a violent assault, including 10 lb. landscaping bricks.

Kubisiak was located in a pickup truck in a driveway. Officials say the investigator drew his firearm and shouted commands to Kubisiak, which he ignored by driving past the investigator. Authorities say Kubisiak then stopped the truck, placed the vehicle in reverse, and accelerated rapidly toward the investigator.

The sheriff’s office says the investigator, fearing for his life, discharged his firearm at Kubisiak in the truck. Officials say Kubisiak then drove the truck into the investigator’s squad car and fled northbound on Britton Road.

Minutes later, officials received information there was a man acting erratically near a pole barn at the 22000 block of Washington Avenue. Authorities say deputies responded and found Kubisak walking in and out of the pole barn.

A perimeter was established and Kubisiak was contained, officials say, and the SWAT team was called in.

#BREAKING: @RacinePD have blocked off roads around Washington Ave. by HWY 20 between N. Britton Rd and Beaumont Ave for a reported incident. We are working to get closer. Officials say there is “no danger to the public.” @CBS58pic.twitter.com/WDvm1JyPGi

According to the sheriff’s office, Kubisiak disregarded commands from the SWAT team, armed himself with a knife and intentionally injured himself by slashing his wrists and throat.

Officials say the SWAT team took Kubisiak and immediately provided emergency care. He was then transported to a local hospital.

The investigator has been employed with Racine County for the past twenty-years, serving as a dispatcher, patrol deputy, and criminal investigator. The investigator also served 20 honorable years in the US Army.

“It is unfortunate that Kubisiak violently attacked the victims with a huge brick, but I am proud the investigator quickly responded and ended the potentially deadly confrontation,” said Racine County Sheriff Christopher Schmaling. “While I have requested the Kenosha Sheriff’s Office to investigate the officer-involved shooting, all of the preliminary facts indicate that the investigator was justified in discharging his firearm. I am proud of the Sheriff’s deputies, who quickly located Kubisiak and contained him within the pole barn, ensuring the public was not in danger. Lastly, the SWAT operators used appropriate tactics when they confronted Kubisiak, and he chose to take his own life. I commend the quick and decisive actions of the investigator and the coordinated responses of the first arriving deputies and SWAT operators.”