Environmentally conscious sports fans are looking to replace rubber and plastic in artificial turf with natural materials like walnuts. It’s more expensive, but cleaner and greener if grass isn’t an option.

A Greater Cincinnati company is making that walnut fill turf using Safeshell. The Motz Group, based in Newtown, is installing, and selling it to facilities on both coasts and in the Midwest.

In 2018 a Boston high school says it became the first in the world to use the Safeshell artificial turf. The Motz Group has installed three multipurpose fields in Brooklyn.

Here are area fields with Safeshell:

Instead of rubber or microplastic, Safeshell uses walnut shells as infill — specifically, English and black walnuts produced by a Missouri company.

Motz VP of Marking and Innovation Adam Coleman explains because the shells aren’t as soft as rubber, extra padding is needed.

He pulls out some samples on one of a dozen mini soccer pitches with walnut infill in Cincinnati, this one at the Madisonville Recreation Center. “On top of this tennis court is a recycled foam pad, which provides protection should the athlete fall on the surface. On top of that goes the synthetic turf fibers and then within those fibers go the Safeshell.” 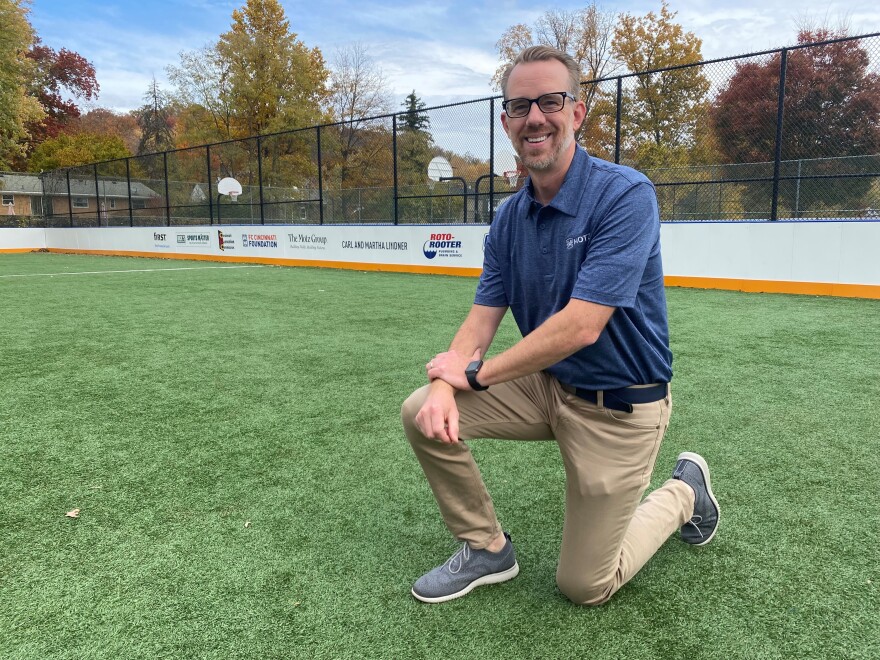 The Motz Group’s Adam Coleman on one of about a dozen mini soccer pitches in Cincinnati with walnut infill.

The firmness is what a lot of people don’t like about synthetic fields — rubber or walnut. They say it leads to more injuries for athletes. But Coleman points out grass requires fertilizer and lots of maintenance. The walnut synthetic field does not, but is about 15% to 20% more expensive than the standard rubber synthetic. Important for urban settings, it can lower the temperature by 38 degrees.

The market could get much bigger

The European Commission has recommended banning rubber and microplastic infill for artificial turf. It would become effective at the end of a six-year transition period.

What about people with nut allergies?

There is one potential problem with nuts. What about people who are allergic to them? Coleman’s own daughter has a tree nut allergy. So, The Motz Group — which has been around for 45 years — figured out a way to handle that.

“We looked at several different ways to remove the residual tree nut allergen from the nutshell. The tree nut allergen is actually associated with the protein. It’s in the nut itself. But through the processing of some of that nut stays on the shell,” says Coleman.

“And so we had to develop a way to very confidentially remove any of that residual protein. And so, we developed a patented process that heats up the nutshell to a certain temperature for a certain amount of time and denatures or breaks down that protein until it’s no longer an issue.”

Coleman has found another use for the shells on fields: baseball warning tracks. Outfielders who’ve tested them say they like how the feel changes.

That’s the story in a nutshell!

5 Landscaping Mistakes To Avoid This Fall