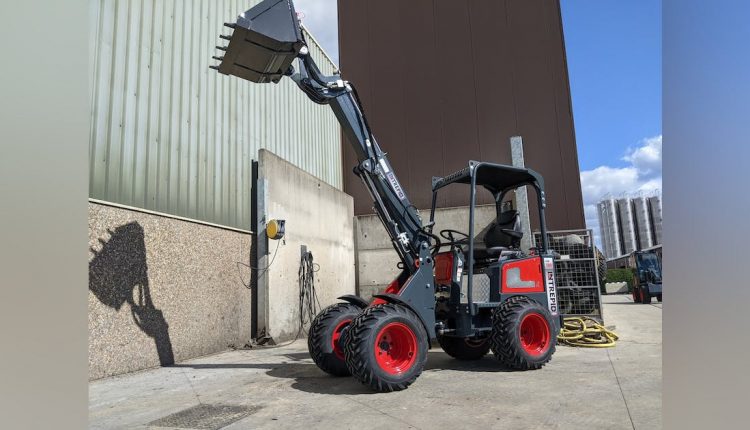 The company says the KM85 is the smallest wheel loader of its kind available in the American market, having a service weight just short of 2,000 pounds. The KM130 Tele will come in heavier at 4,000 pounds and is equipped with a telescopic boom.

Intrepid loaders are built in Belgium by Geens Brothers.

Dual wheel KM85 is targeted at green industry and hardscaping contractors, featuring a small frame width of 32 inches and 1,000 pounds rated operating capacity. “It has an excellent power-to-weight ratio as it is equipped with a 23HP D902 Kubota engine,” says Chris Sleurink, owner of Miniloaders.com. “This engine is usually seen in heavier industry peers,”

The KM85 is designed for those who need the lift performance of mini skid steers, but are looking for a turf-friendly and compact alternative. A unique feature of the KM85 is its dual-wheel setup. “The operator can remove the outer wheel by removing a single bolt, decreasing the total width from 47.5 inches to 35.5 inches,” Sleurink says. “This makes it possible to haul debris and materials through a standard 36-inch-wide gate.”

The telescopic boom KM130 Tele has an operating capacity of around 2,000 pounds, a four-cylinder Kubota engine, and 10.5-foot lift height. “A distinguishing feature of all Intrepid articulating loaders is a solid, steel construction,” Sleurink says. “This allows us to sell to multiple industries, regardless of job site conditions.”

The KM130 Tele will be equipped with an MT-style universal mount plate and hydraulic quick-connect. Furthermore, the KM100 Tele and KM130 Tele now come standard with a hand-throttle. Once the operator sets a desired rpm level, the foot throttle pedal in turn determines drive speed (instead of rpm). This allows customers to better use continuous-flow attachments like sweepers and mowers. It also allows customers to select the fixed-rpm drive mode as seen with skid steers. “We are the only brand featuring this option as a standard on our loaders,” Sleurink says.

Intrepid loaders are sold and distributed directly to the end-user out of Wisconsin.

“We’re seeing steady sales across the US, mainly to green industry customers such as arborists and landscapers,” Sleurink says. “Our KM100 Tele is popular among tree care companies because of its compact size and telescoping boom, but above all due to its articulated steering which results in minimal lawn damage. In introducing these loaders, I anticipate the same success as seen with the KM100 Tele. The KM130 Tele is the manufacturers’ best-selling loader in Europe. I hope to see the same here within the next few years.”