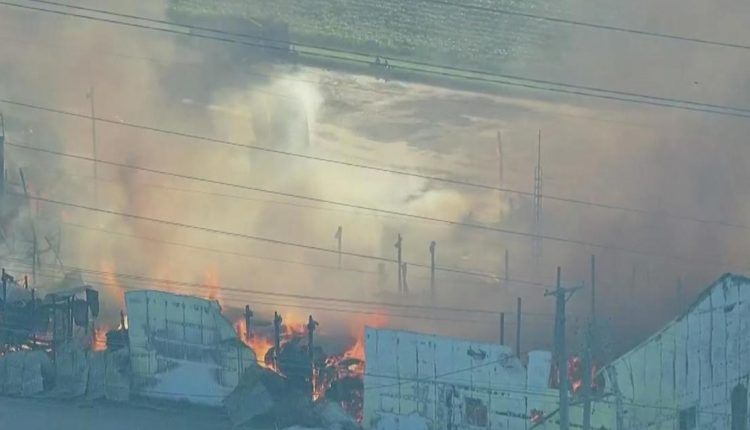 CHICAGO (CBS)– A shelter in place order has been lifted in far southwest suburban Shorewood, after a massive fire at a landscaping and farm supply store sent what authorities feared could be toxic fumes into the air Tuesday morning.

The fire started around 4:30 am at the Tri-County Stockdale Company, in the 25500 block of Black Road in Shorewood.

The State Fire Marshal will be on site in the coming hours to investigate the cause & origin of a massive fire in Shorewood that has consumed a landscape & farm supply company. Fortunately, no injuries have been reported. Updates at https://t.co/vhbRxCcLib pic.twitter.com/SHvwdzYVwH

In addition to the risk of toxic fumes from the fire, police and fire officials were worried about propane tanks and power lines.

Some neighbors said they woke up to the sounds of explosions.

For hours, heavy smoke billowed from the property as the landscaping and farm supply facility went up in flames.

It burned all things lawn and garden; including animal feed, compost, fertilizer, and pesticide, which were of particular concern for firefighters.

“Once the fertilizer and the pesticide starts burning, it creates toxic smoke, and with the weather we’ve had, the humidity, it’s been keeping the smoke closer to the ground,” said Troy Fire Protection District Chief Andy Doyle. “All firefighters that were involved were wearing SCBA or other air masks. We tried to keep them out of the smoke as much as possible, even if they were wearing an air pack, just because toxic fumes, because it will get on their gear, and stuff like that.”

That’s why, for several hours, officials told people within a 2-mile radius northeast of the store to shelter in place.

Doyle said even people who weren’t in the cloud of smoke might have smelled the fertilizer burning.

“We’re going to continue to monitor it. We’re asking that any residents who have any issues with respiratory just to be cautious, and if they smell anything that doesn’t smell right, or they feel like they’re having some irritation to their respiratory system, dial 911, and we’ll have somebody come out and check it out for them, and make sure everything is safe,” he said.

Firefighters also feared propane tanks on the property would get too hot and explode.

They also worried one of the grain elevators on the site might collapse and fall on power lines, which would have taken out power for almost all of Shorewood. So they needed to clear the perimeter around those lines.

Four of the six buildings on the property are a total loss.

Flames have consumed much of the Tri-County Stockdale facility on Black Road east of County Line in Shorewood. Black Road will remain closed as firefighting efforts continue. Tenders are bringing in water to the scene, as no hydrants exist here. More at https://t.co/vhbRxCcLib pic.twitter.com/fhEeAMpTFu

Doyle said Tri-County Stockdale has been around for decades, and has become a staple of the community.

“You need fertilizer, or grass seed to do your yards, a lot of people went there. They’ve been in business a long time,” he said.

While the fire was extinguished after a few hours, Doyle said crews will remain on the scene most of the day and night to put out hotspots. Black Road will likely be closed most of the day between River Road and County Line Road, as crews shuttle in water.

Investigators don’t believe the fire was suspicious, but it will be a full day before they can get inside and begin their work.

No injuries were reported, and while officials were still taking inventory on animals that were inside the facility when it caught fire, at least 20 chickens and a cockatiel made it out unscathed.

Marissa Parra is a general assignment reporter for CBS2 Chicago. While her specialties include shedding light on injustice, she has a soft spot for stories that remind us of the good in humanity.

The Rise of Artificial Turf