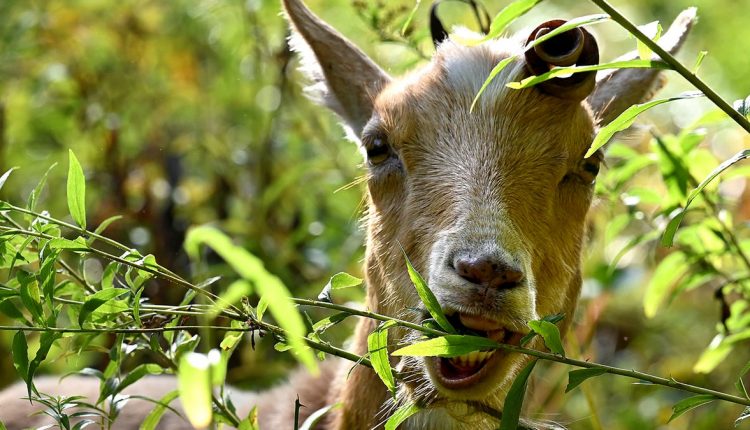 MARLBOROUGH — Hundreds of years ago, when much of MetroWest was farmland, the area was powered on the backs of animal labor. Today, while man has mastered machine, there are still some animals doing the heavy lifting — or more like eating — to help make the region a nicer place to live.

For the last few years, Marlborough has been using a team of goats to help tackle some of its trickiest landscaping problems. The goats, which are owned by Houde’s Landscaping, are called into duty whenever the city needs to clear an area of ​​forest or grassland in a low-impact manner.

“The goats love to eat everything, especially things like poison ivy, as well as invasive species like bittersweet,” said Priscilla Ryder, the city’s conservation officer. “If you leave them somewhere, they will clear it all.”

The team of five goats has a simple task. They are left in a fenced area that needs to be cleared — such as the Marlborough Community Garden, Holts Grove Conservation Land and areas along Lake Williams — and the goats just eat everything in sight.

“The goats can clear the area and make it easier for people to go in with a tool or machine,” Ryder said. “If there is an area you are trying to clear, and it’s covered in vines and weeds, you can’t just go in with a chipper or something because it will get tangled up. The goats come in, clear the area, and then it’s way easier to manage. And they fertilize the area as they go.”

The city began using the goats about four years ago after noticing that other cities had done the same.

“We saw places like Boston using goats with some of their landscaping issues, so we went to Mayor (Arthur) Vigeant, and he signed off on it,” Ryder said.

At first, the city was using another landscaping company’s goats, one that was located an hour away. Then Mike Casto, owner of Houde’s Landscaping, proposed that he could provide the same service at a better rate and provide local upkeep.

“I have a degree in animal science, and one of the things you learn is that goats are kind of like an entry-level farm animal — they don’t need much space and the way to feed them is to just let them roam around ,” Casto said.

The goats will spend time in one area, with an electric fence set up as a boundary. Every few days, the fence is adjusted to make sure the goats have enough to eat. They are currently at the Marlborough Community Garden, and are expected to remain there until November.

“The key is making sure that they have enough to eat; as long as they have enough stuff in the area to eat, they wouldn’t dream about testing the fence,” Casto said. “This time of year, we do have to start supplementing them with hay, since there isn’t always as much nutrients on the ground as there is in the spring or summer.”

When they aren’t working in town, the goats are kept on the premises of Houde’s Christmas Tree farm.

“Goatscaping” is an ancient practice that dates back about 12,000 years, according to archeological studies. Goats can control the population of weeds and invasive species, while also providing limited noise when compared to machinery. Millenia of evolution has also allowed the goats to get into certain areas that are difficult for humans, even with machines.

“The goats are very good at standing on slopes and getting into spaces that are hard for humans,” Ryder said. “In the area behind the courthouse near Lake Williams, there is a steep slope that is filled with bittersweet, and the goats get right in there and take out all of it.”