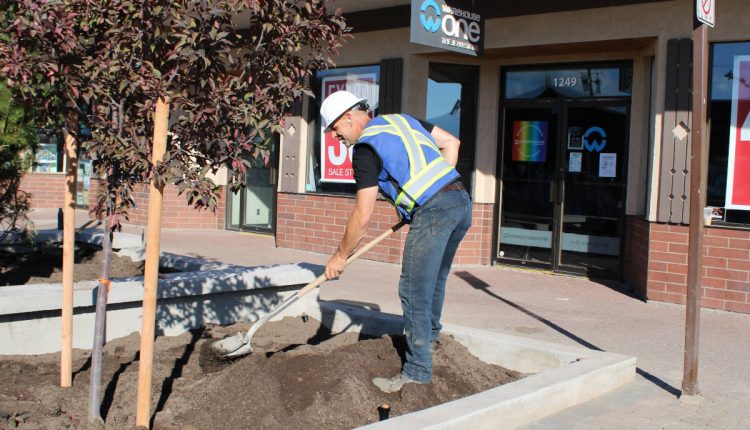 Main Street re-landscaping gets back on track

Despite being set back by a couple of weeks by unseasonably rainy weather, the owner of the Kamloops landscaping company redoing Main Street says they are more or less on track to meet council’s completion estimate of the middle of August.

“We didn’t really set a complete target because we wanted to make sure we were affable with the businesses as much as we could,” said Colin Lyons. “Our preference would have (been) come in and just shut the whole thing down and give us the whole place, but when you’re going two blocks and a time and really trying to make sure the businesses can stay open, I think it’s been going pretty good; lots of good feedback.”

He figures they have made up about four or five days since the weather improved.

The project recently saw a budget increase of $100,000 — to be financed out of the town’s Northern Capital Planning Grant — because of frost damage to irrigation lines.

“If any of us could have the perfect genie and see what’s underground and knew what’s underground, we’d all be better estimators, but we’re still estimating,” he said. “When you hit those hidden things that are underground … you’ve got a 40-year-old streetscape, with 40-year-old irrigation and parts just pull apart, we really had to chase the problem further to make sure you guys aren ‘t left with a worse problem when we leave.”

Lyons estimates the new landscaping should be good for the next 40 years with a bit of a caveat.

“If it’s maintained and cared for by everybody, resealing, cleaning things, keeping them up to date, having an arborist to really prune and take care of your trees to keep them in proper shape and really looking after the landscape, 40 years seems to be about the average.”

Residents won’t have to wait nearly that long, though, to enjoy the new look of Main Street, Lyons said.

“It looks small right now, but give it two years,” he said. “Once you see this in two years, it’ll really be impressive.”

Meanwhile, the town may have earned another convert.

“I love Smithers, I had no idea, I’ve drove through here and been here a couple of times just for days, but if I had to pick a place to move, or pick a place to hang my hat, this is definitely in the top three,” Lyons said.