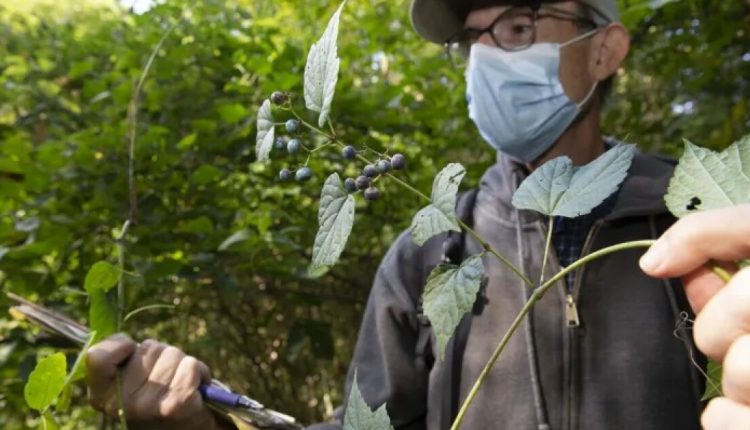 The woods around some urban areas are increasingly filled with invasive species that are crowding out the native plants. The third major botanical survey in 200 years is currently ongoing in the natural areas of southwestern Ohio.

The findings so far show an alarming shift in the plant populations since the first such survey was done in the 1830s and ’40s, before modern development.

“There were more wetlands and even some prairie and fen-like habitats, swamps, incredible deciduous forests,” said University of Cincinnati biologist Denis Conover, the study author. “So, the diversity of native plants at that time was almost unbelievable.”

One hundred years later, in the 1930s and ’40s, another plant survey found that many of those natural areas had been developed into roads, apartments and neighborhoods.

Now Conover is walking in the same footsteps, surveying ten natural areas near Cincinnati that haven’t been paved over, including cemeteries, parks and preserves.

English ivy is one of the most common invasive plants found in the survey.

2 of 3
— Conover with English Ivy.jpg

Denis Conover with a piece of invasive English ivy, commonly planted as a groundcover in yards.

UC professor Theresa Culley stands next to a Callery pear tree, which are found in neighborhoods across the United States. Pennsylvania has banned its sale.

He’s finding that what people have been planting in their yards is also flourishing in the remaining wild spaces.

“One of the most striking things that I’ve noticed is the huge increase in non-native, invasive plants that have invaded the woodlands here in southwestern Ohio,” he said. “And it’s very disturbing because it’s very detrimental to the native plants, plus the wildlife, including the insects that depend on those native plants.”

Conover finds ground cover like winter creeper and English ivy carpeting natural areas. He’s found more than 50 species of plants that are believed to have moved from yards and gardens into the woods.

Plants like the Amur honeysuckle produce small white flowers and red berries to decorate yards, but in the woods, they inhibit the growth of other plants.

“So once it gets going in the woods, it just keeps spreading and spreading, and it literally takes over because there will be very little vegetation growing underneath these shrubs,” he said.

Conover points to one Cincinnati nature preserve where there was an effort to clear out the honeysuckles, and they saw the native species bounce back.

“You can make a difference,” he said, but emphasizes that this kind of effort needs to be done before seeds from the native plants are gone from the soil forever.

He also encourages people to plant native species in their landscaping to assist in the effort.

The Allegheny Front is produced in Pittsburgh and reports on the environment.

Main Street re-landscaping gets back on track