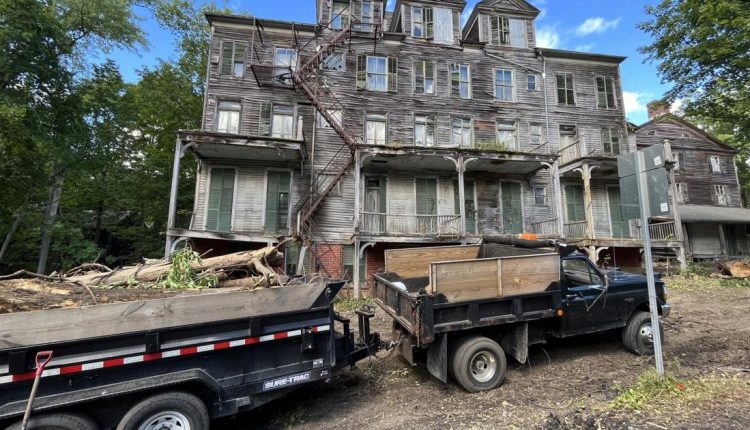 BENNINGTON — Work is underway by the owners of the historic Walloomsac Inn to trim back overgrown vegetation from the structure, parts of which date to the late 1700s.

Members of the Berry family, which has owned the inn building since the early 1900s, said last month that the landscaping work would be part of efforts to investigate the condition of the building and stabilize it if necessary.

Bill Kaiser, who is the son of Kathleen (Berry) Kaiser, administrator of the estate of two sisters who died in 2021, also said the family is working with people in the community and others to determine possible future uses for the building that take into account its unique history.

“We are determined to make good choices,” Kaiser said. “Our family is trying to figure out, what’s the best thing for the inn? So, as it is a private place, is it a good choice for us?”

The historic importance of the inn — believed to be the first hostelry in Vermont — is at the forefront of the family’s thinking, Kaiser said.

Elijah Dewey built a tavern on the site in 1771, according to information on the Bennington Museum website. Dewey’s tavern was among locations used by the Legislature of the Republic of Vermont, which lasted from 1777 until statehood was achieved in 1791.

Walter Berry Sr. purchased and enlarged the inn in 1903. Berry was the grandfather of the two sisters who died last year, Arlene Berry and Donna Berry Maroney, and of Kathleen Kaiser.

The building has been a private residence and hasn’t operated as an inn since 1984.