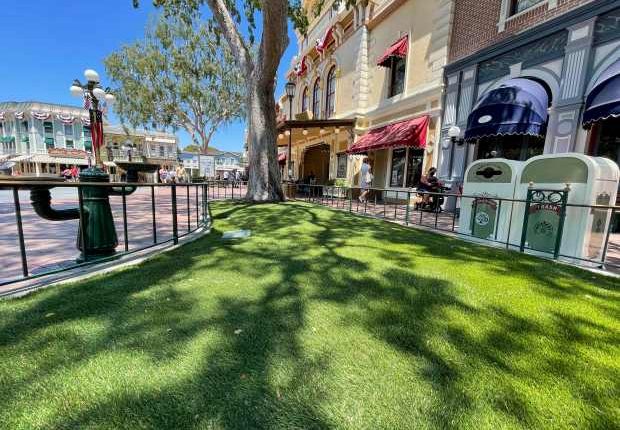 Disneyland has rolled out the green carpet with more artificial turf over the past few weeks and months as part of a drought-fighting water conservation effort that has largely gone unnoticed — and that’s the goal.

But sharp-eyed Disneyland fans may start noticing the change from natural to synthetic grass throughout the park starting this week.

New artificial turf around the Mickey floral planter at the Disneyland entrance and the Haunted Mansion front lawn will be unveiled on Friday, Sept. 2 when Halloween Time kicks off at the Anaheim theme park.

Disneyland’s phased approach of adding artificial turf in select locations every few weeks is about to pick up speed as a drought-tolerant approach to saving water.

The Mickey floral planter with Halloween colors and the Haunted Mansion Holiday ride overlay will be unveiled on Friday when the spooky season kicks off — and with it large swaths of new artificial turf in high-profile locations.

Disneyland has been reducing the amount of real grass that needs to be mowed with artificial turf that needs regular brushing over the past decade. The first major installation was in 2012 when Cars Land opened at Disney California Adventure with artificial turf in front of Sarge’s Surplus Hut and Flo’s V8 Cafe and in the queue line at Luigi’s Rollickin’ Roadsters.

The high-end artificial turf used at Disneyland is harder to spot than the low-cost versions found in residential neighborhoods that look like synthetic green carpeting with visible seams. Disneyland uses eight different types of artificial turf with gray, brown and off-white blades intermittently woven in to look more natural.

Disneyland fans may be surprised to realize they’ve been staring at artificial turf with their own two eyes and never noticed.

Grounds crews converted the natural grass to artificial turf around the “Storybook” letters floral display on the hillside of the Storybook Land Canal Boats over a three-day period in July. Swapping out the grass for turf on the Storybook hill saves 81,000 gallons of water a year, according to Disneyland officials.

Grass bands around the perimeter of Disneyland Town Square floral beds designed to protect the flowers from curious visitors along with smaller grass planters near Disneyland City Hall were converted to turf in early August.

Disneyland’s garden team worked closely with event planners and Walt Disney Imagineering on the turf projects. Hardscape artificial turf is harder to tear up or trench – which becomes a major issue when seasonal events like the Candlelight Processional are held in Disneyland Town Square.

Artificial turf has also been added to the Adventure Tower lawn at the Disneyland Hotel and to service dog relief areas throughout the theme parks.

Not all former grass areas at Disneyland have been converted to artificial turf. Sometimes bushes, plants and flowers that use less water than grass are planted instead.

When the Disneyland horticulture crew does plant grass, it tries to use warm climate grass rather than cool climate grass — which uses 50% less water.