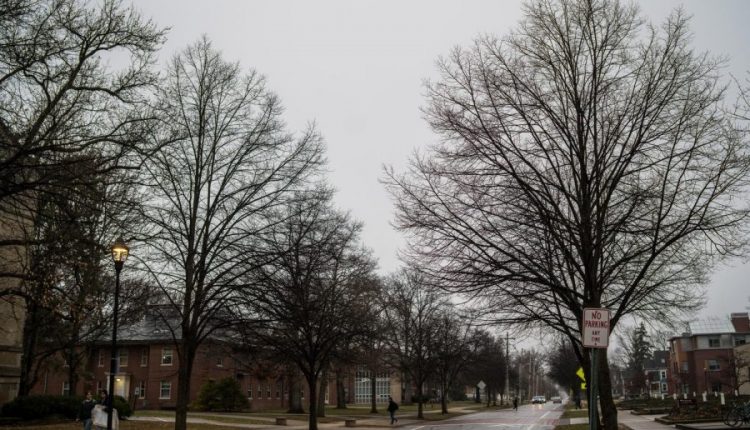 As part of the Sustainable Infrastructure Project, new trees were planted to replace those that had been removed during construction.

The Sustainable Infrastructure Project’s second phase is wrapping up this week with the planting of new trees along Woodland Street. These trees are being planted where construction took place in the summer of 2022, when pipelines were being placed on campus and where geothermal wells were installed. This is the second re-installation of trees in this project — the first having taken place in December 2021.

K&R Landscaping, a company based in Hamilton, OH that provides landscaping, hardscaping, and commercial services, has been contracted to do this round of replanting. Trees were removed before construction began on Woodland Street.

Joshua Shartzer, a foreman with K&R Landscaping, said that when planting the trees, the main challenge was digging up miscellaneous non-soil items.

“Most of it is running into roots and rock … we think we’ve got a parking curb here that we’re trying to dig up,” Shartzer said.

The new trees are a variety of native and ornamental species that College officials say will enhance the College landscape’s hardness, sustainability, and appropriateness to the region.

Ember Carrera, a second-year college student, thinks there is value in the SIP project planting trees but sees opportunity for more to be done.

“I would say that establishing grasslands would be a better way of sinking carbon than planting all new trees,” Carrera said. “Plant new trees and do the grasslands [as well] is my personal stance.”

The College has a number of native plant sites and grassland areas around campus, including a rain garden at Old Barrows Hall funded by the Green EDGE program and the wetland area at the Adam Joseph Lewis Center for Environmental Studies. The College planned to install Maya Lin’s “A Remnant Garden,” a natural wildflower meadow area that was to be built outside the Hotel at Oberlin as part of her collaboration on a natural landscape project, but it had to alter the project during construction in 2021 .

The next phase of SIP construction will begin in summer 2023 after trees along North Professor Street, Lorain Street, and Woodland Street are removed in January 2023.