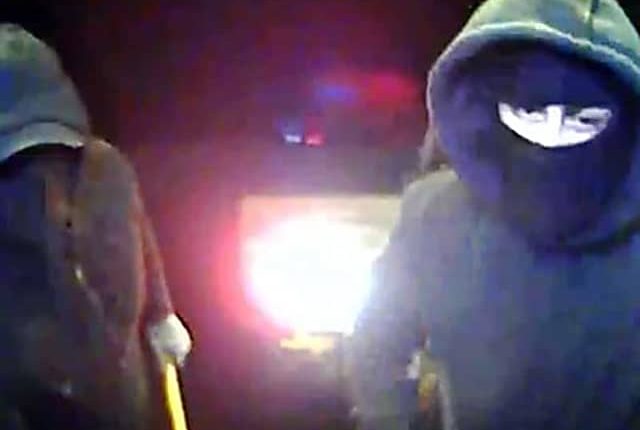 One theft was not enough for ski mask-clad individuals who used a stolen landscaping truck to get away with multiple containers of cash from an ATM in Tyngsborough, authorities reported.

Police are seeking help to identify two or three individuals who robbed an Enterprise Bank ATM on Middlesex Road in the early hours of Thursday Dec. 8, Tyngsborough police said.

Surveillance images show the suspects breaking into the ATM with a crowbar and a black truck with a logo reading “Jays” on the driver’s side door. A high-speed car chase ensued after the suspects fled into the stolen truck, authorities said.

A 911 call alerted police to suspicious activity outside the bank around 3:00 am on Thursday. Responding officers arrived at the scene to see a truck that matched the description made by the caller quickly exiting the scene.

The suspects, still at large, fled down Middlesex Road towards New Hampshire. Police followed the truck, but cut the pursuit short when the chase began to reach excessive speeds.

The truck, determined to have been stolen from a landscaping company in South Windsor, CT, was recovered in New Hampshire, but the stolen cash was nowhere to be found.

Police request that anyone with information, or who may recognize the individuals from the surveillance photos, contact Tyngsborough Police Detective Peter Kulisich at 978-649-7504, ext. 137, or at pkulisich@tyngsboroughma.gov.

Those wishing to remain anonymous may call the Tyngsborough Police Anonymous Tip Line by calling 978-649-7504 and then dialing 9.

Hollies are best choice in landscaping shrubs for North Texas