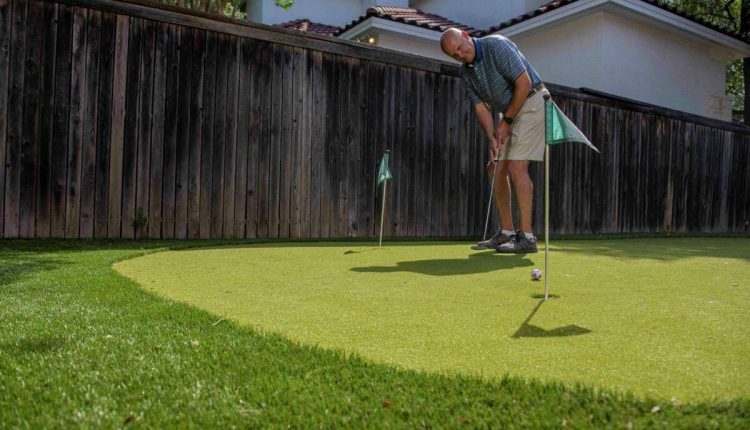 Is artificial turf worth the high price? These San Antonians say yes — especially with the drought

Guests who walk into the backyard of Sharon O’Malley Burg’s Rogers Ranch home often comment on how crisp and clean it looks. That’s because about five years ago, she and her husband, a retired Air Force major general, replaced what had been a weedy, patchy lawn with a blanket of emerald green artificial turf — part of it a putting green.

“It changed our relationship with the backyard,” said O’Malley Burg, who runs an information technology and cyberconsulting firm. “We like to entertain, and the artificial turf makes the yard look like a showcase.”

With the city already in Stage 2 water restrictions and climate experts calling for more long-term droughts, many homeowners may be wondering if now’s the time to replace their water-hogging lawns with artificial turf — and whether it’s worth the high cost to do so .

In San Antonio, for example, synthetic grass costs between $7 to $13 per square foot, depending on the quality of the turf, according Justin Hale, owner of Amazing Turf & Lawn.

It cost O’Malley Burg and her husband about $58,000 for that crisp and clean look, which included the design, removal of the existing growth and site preparation, some decorative stone and about 3,800 square feet of turf.

Roger Burg practices on the artificial turf putting green in the backyard of his Rogers Ranch Home. Burg and his wife Sharon O’Malley Burg installed the fake grass in their yard to help save on water.

“It was breathtaking,” she said of the cost. “But we’ve never regretted it because not only are we using the backyard more than ever, we think it’s a good investment in our home.”

On ExpressNews.com: Best drought-tolerant plants in sun and shade for your San Antonio garden landscape

Fans of artificial turf say it has many benefits that make it worth the price. Fake turf can reduce the bills for yard maintenance and water use. It can also significantly reduce a yard’s mosquito population as well as that of fleas, ticks, chiggers and other insects that can’t live in plastic.

And modern turf doesn’t absorb as much heat as it used to, thanks to sun-blocking resins added to the fiber and blades shaped like a W or an S that absorb less sun than flat blades.

“The yard is so worry-free, we plan to live here longer than we would have otherwise if we still had to maintain it,” she said.

Artificial turf first made headlines in 1966 when it was installed in Houston’s Astrodome, where it was dubbed AstroTurf. While earlier iterations had the well-earned reputation of being hard and unforgiving, modern turf is more pliable, making it durable enough for high-traffic zones yet soft enough for children’s play areas. It can also be used in putting greens, bocce courts even mini golf courses.

Demand for artificial turf is skyrocketing, according to Hale, who’s been installing synthetic turf since 2013. He said that until two years ago, business was growing at a slow and steady pace. Then came the pandemic.

“As people were forced to stay in their homes, they realized their backyards were dirty, muddy and didn’t have much grass,” he said. “They hated it.”

Soon, Hale’s business boomed with clients who decided to spend some of the money that would have gone to vacations and restaurants on artificial turf for their yards. His business has grown 30 percent to 40 percent annually ever since. 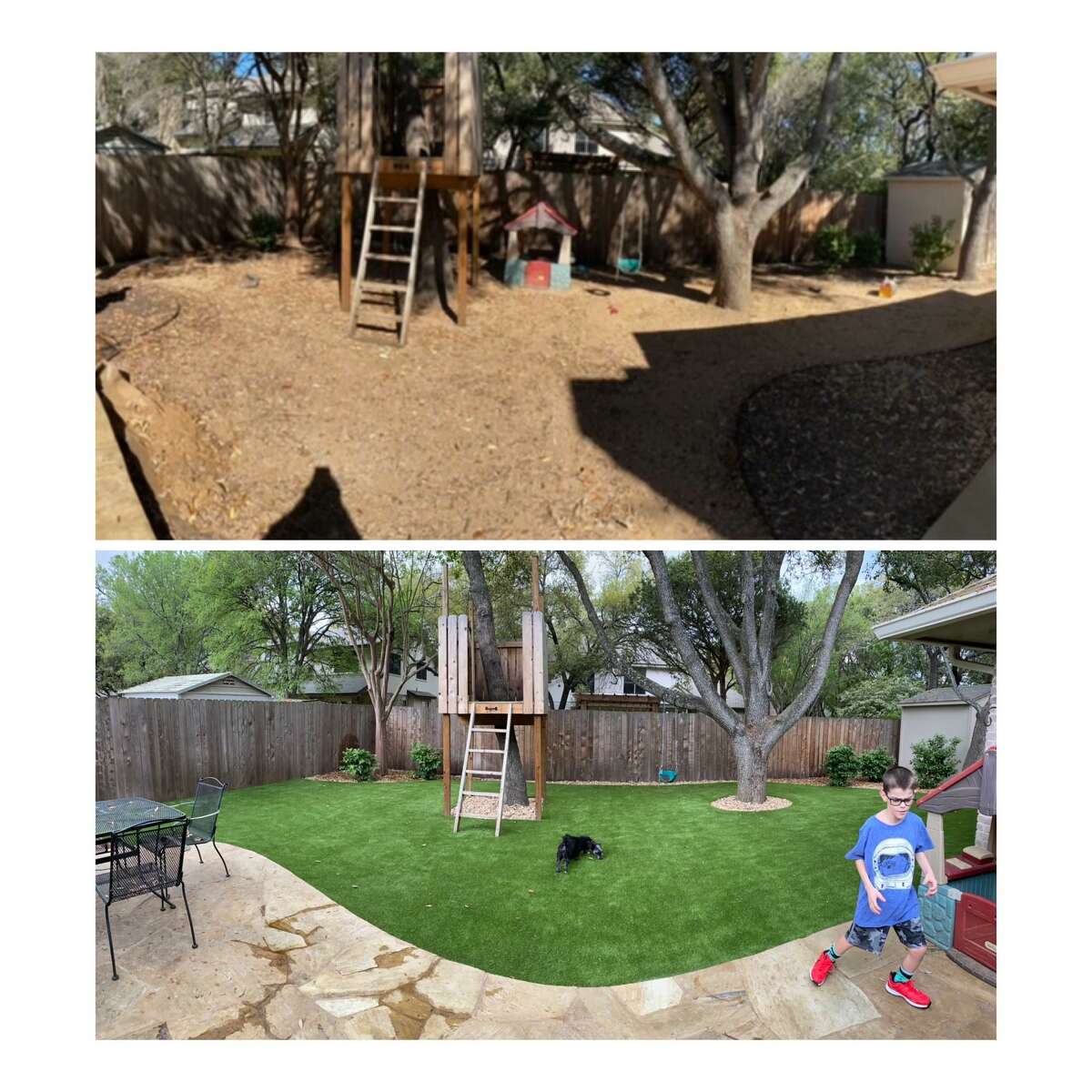 Before and after photos of Rachel and Shaun Gardiner’s backyard in the Woods of Shavano. They added artificial turf to the yard because it was too shady to grow grass and so their three children and dogs would stop tracking mud into the house.

When Rachel Gardiner and her husband moved into their woods of Shavano home five years ago, the heavily shaded backyard was mostly dirt or, when it rained, mud. “When we visited a restaurant that had a playground with artificial turf, we said, let’s look into that,” Gardiner said.

Today, their yard is a green oasis where their three young children and two dogs can play and Gardiner, a homemaker, doesn’t have to get out the vacuum every time they come back into the house.

One obstacle that prevents even more homeowners from making the switch are homeowners association rules prohibiting the installation of artificial turf. When O’Malley Burg and her husband first started looking into it, they discovered it was against their HOA rules.

“So we got involved with the organization and were able to get the rules changed, so it’s now allowed in our part of Rogers Ranch,” she said.

There are several common misconceptions about artificial turf that Hale said he has to address any time he talks to a potential client.

The first is that artificial turf is hard to keep clean if your pets use it to do their business. In fact, the synthetic materials turf is made of inhibits the growth of bacteria or other microorganisms from pet waste. All that’s needed is to pick it up and give the area a quick hose off. 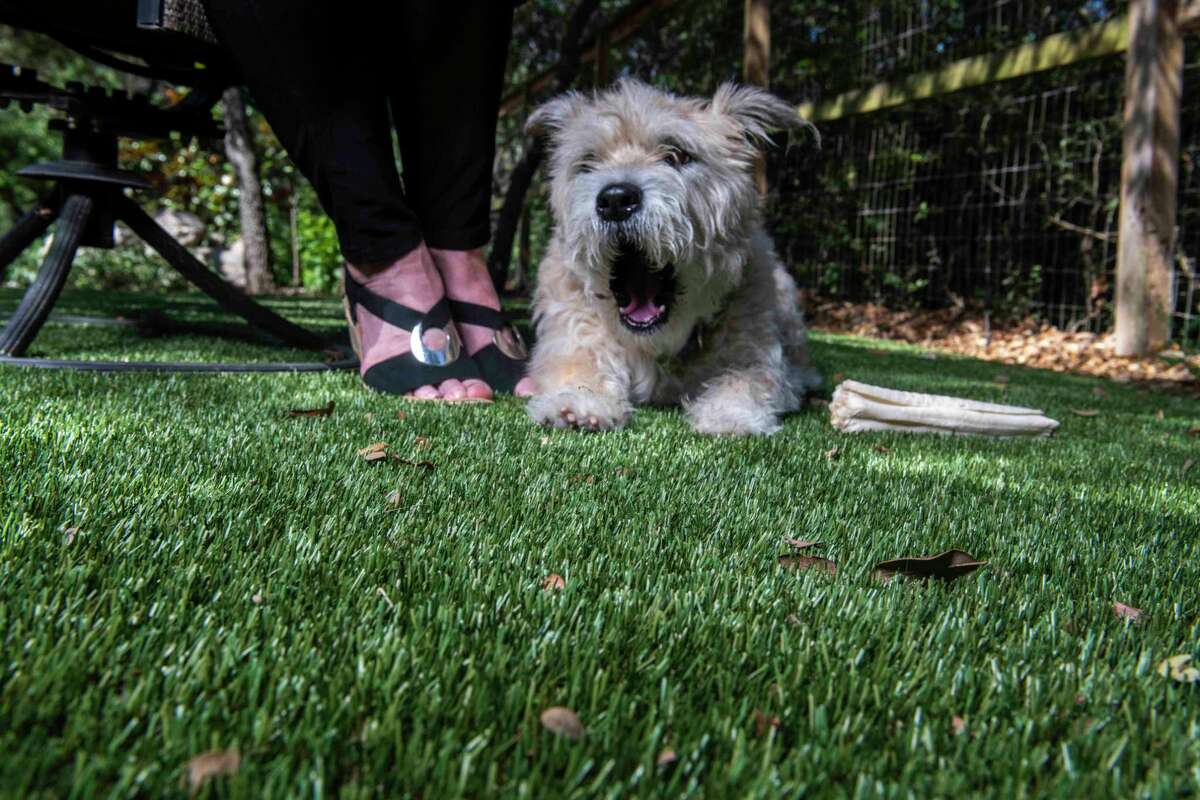 A close-up of the artificial turf in Sharon O’Malley Burg’s Rogers Ranch yard.

As for liquid waste, artificial turf is engineered to allow liquids, such as rain and pet urine to quickly pass through the top layer to the substrate below. That base is made of 4 inches of porous material such as crushed limestone and decomposed granite, so liquids quickly drain away.

There are also products that, when applied to the turf surface, neutralize any residual odors. Simply Google “artificial turf pet treatment.”

Another misconception is that artificial lawns are maintenance-free. While it’s true they don’t need mowing, fertilizer or watering, they do require some attention. Falling leaves, for example, can be a problem.

“What you don’t want is to let leaves and other organic material sit on the turf long enough to where it starts to decompose,” said Lance Heckel, owner of Synthetic Turf International of San Antonio. “A high-pressure hose or a good leaf blower will usually do the trick to wash away any debris.”

Finally, newer technologies have made the turf look and feel more natural.

Jeff Bailey installed artificial turf at his Terrell Hills home and said it looks more like real grass than a cartoon painting.

“It’s not all one shade of green,” said Bailey, who works in commercial real estate. “There’s a variety of colors.

What is hardscape landscaping? 3 tips and ideas for the garden