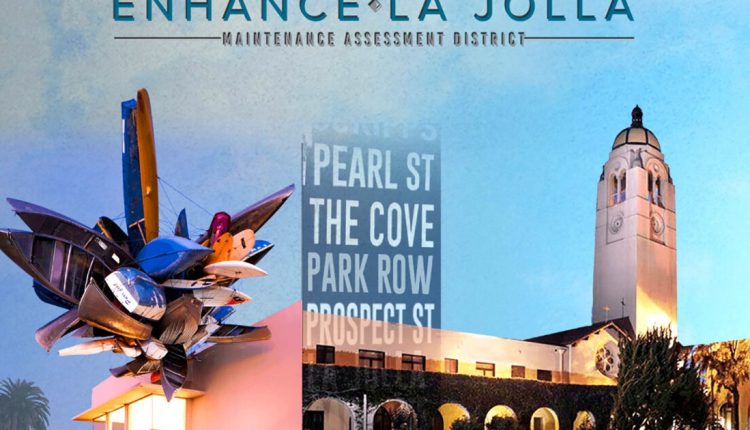 An effort to beautify utility boxes within the La Jolla Maintenance Assessment District by covering the surface of the boxes with artistic vinyl wraps continues to progress.

A committee composed of three Enhance La Jolla directors has solicited and vetted cost estimates from several artists for the project. A list of specific utility boxes to be included in the pilot enhancement program and proposed images and designs for the boxes will be shared at the next Enhance La Jolla board of directors meeting on Thursday, July 21.

The venue for the meeting has changed from the La Jolla/Riford Library to the Museum of Contemporary Art San Diego, 700 Prospect St., La Jolla. The meeting will begin at 4 p.m. in one of the museum’s meeting rooms. The meeting date falls on MCASD’s free Third Thursday. On the third Thursday of every month, the museum offers free admission to all visitors and remains open until 8 pm Members of the public are welcome to enjoy the museum and attend the Enhance La Jolla board meeting.

In landscaping news, several tree wells in front of the La Jolla/Riford Library at the 7500 block of Draper Avenue were augmented with the addition of river rock.

In coming weeks, river rock will be added to tree wells and areas of exposed dirt on Kline Street between Girard and Fay avenues.

A stretch of Herschel Avenue between Prospect and Wall streets also will benefit from the addition of river rock in an area that currently contains a hodgepodge of exposed dirt, hawthorn shrubs and foxtail agave plants.

The MAD also is monitoring the overgrown fronds on the palm trees in the 1120 block of Coast Boulevard at Scripps Park and La Jolla Cove and working with the city of San Diego on corrective action. The project is assigned report no. 03814442 in the city’s Get It Done tracking system.

LJMAD representatives worked with the San Diego Environmental Services and Parks & Recreation departments to coordinate strategies for litter abatement during the busy Fourth of July weekend. LJMAD pressure-washing crews also were prepared to clean up additional spills and sidewalk messes that could come with increased foot traffic.

If you see an issue needing attention in the district, please call Enhance La Jolla at (858) 444-5892 or email manager@enhancelajolla.org.