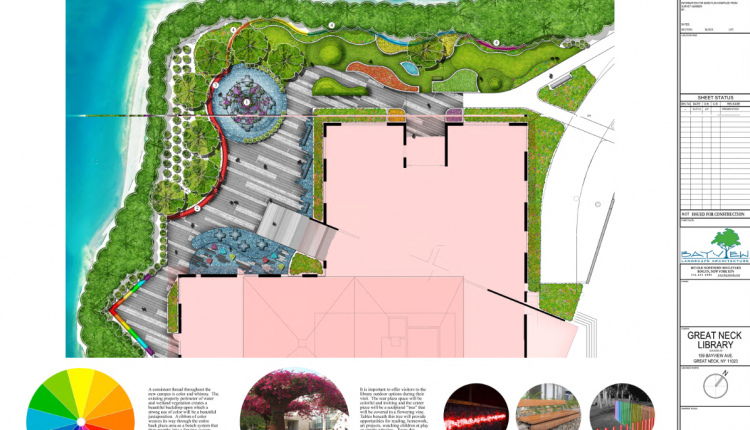 The Great Neck Library hired Land Use Ecological Services to map the Department of Environmental Conservation restriction line at a board meeting on Tuesday, in an effort to try waiving some restrictions for its landscaping project.

Kelly Risotto, a senior ecologist for Land Use Ecological Services, said the scope of his work – worth $3,325 – includes “determining the boundary” and “limit of jurisdiction” of the DEC.

“The DEC regulates title wetlands and then they regulate what we call an adjacent area,” Risotto said.

Risotto said the library could either modify its planned improvements or get a variance, which would require justifying to the DEC why a variance is required, why there are no feasible alternatives and presenting possible mitigation.

Robert Schaufeld, the president of the Great Neck Library, said this determination is part of the landscape project because the project’s buffer zone falls under DEC regulation and, in order to get a “waiver of jurisdiction,” the line must be identified.

The landscaping project is meant to be a finishing touch on a two-year transformation of the Main Library on Bayview Avenue, which added insulated windows, a new children’s area and community room, lighting, study areas and other features.

It will also include a children’s educational garden dedicated to Ann Hyde, who frequented the library as a child and left money to it when she died in 2014.

In other library business, the Great Neck Library approved the installation of a roof drain at the Main Library to address roof leaks, issued a request for proposals for legal services, and filed an annual not-for-profit entity tax return.

There will also be two budget workshops on March 6 and March 12, respectively, at the Main Library at 7:30 pm and a regular board meeting at the Station Branch, located at 26 Great Neck Road above Best Market, at 7:30 pm on March 20.