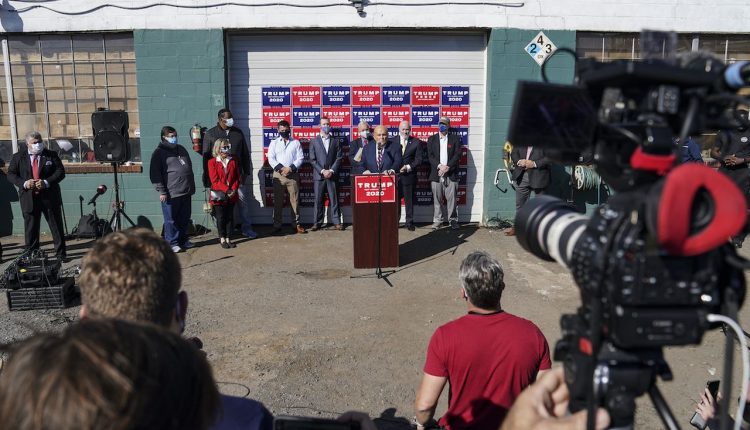 A petition on Change.org seeks to add Philadelphia’s Four Seasons Total Landscaping to the National Register of Historic Places.

There is some ridicule associated with these efforts, but that doesn’t necessarily mean that petition signers are not serious about applying for the property to be on the register.

“This is an important story,” one wrote in a comment on Change.org.

So far, more than 2,500 people have signed the online petition.

The landscaping company in an industrial area in Philadelphia symbolizes President Donald Trump’s ongoing attempt to convince Americans of the false claim that mass electoral fraud is the reason he lost the 2020 presidential election to President-elect Joe Biden. There is no evidence of significant electoral fraud, and the Department of Homeland Security’s electoral infrastructure government coordination council has named the election “the safest in American history.”

Earlier in the day, President Trump had tweeted that his lawyers would be holding a press conference in Four Seasons, Philadelphia that morning. The Four Seasons Hotel in the city center quickly pointed out in its own tweet that no such event was taking place in the well-known Auberge.

Had someone on the President’s team made a mistake? It does not matter. The landscaping company is now internationally known for its role in the by-election efforts of the Trump campaign. The company’s website now sells Four Seasons Total Landscaping T-shirts, hoodies, stickers, and other such Gewgaws.

And it is not entirely out of the question that the nondescript building in north Philadelphia will qualify for the National Register of Historic Places. After all, it was the site of a significant – or at least memorable – historical event.

Anyone can start nominating a property for inclusion in the national program that identifies and protects historical structures. The register was created by the National Historic Preservation Act of 1966. The Old Slater Mill complex in Pawtucket, Rhode Island was the first property to make a spot on the list.