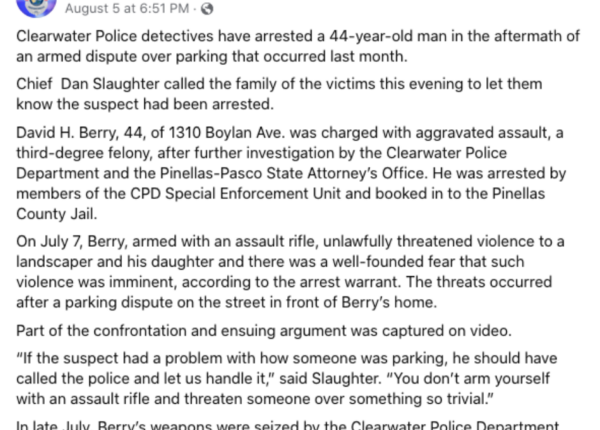 A Florida state attorney approves criminal charges against a white man who pulled out an AR-9 rifle on Black landscapers in early July, days after local law enforcement joined forces to seize all of his firearms. The local law enforcement agency arrested the man, charging him with a felony.

On Wednesday, July 27, the Clearwater Police Department (CPD) and the Pinellas County Sheriff (PSCO) secured a warrant to go into David H. Berry’s property and seize his guns, including the rifle he threatened Jeremy Lee and his 22-year- old daughter Carrie Lee with as they were completing a landscaping project across the street from his house on Thursday, July 7.

After weeks of reviewing the discovery from the investigation, the Pinellas-Pasco state attorney approved the man’s arrest.

Detectives made the announcement on Facebook that Berry was arrested on Friday, Aug. 5. Daniel Slaughter, the CPD Chief, said he reached out to the Lee family, informing them of the arrest after the man was booked.

Berry’s arrest comes days after a risk protection order was filed by PSCO in the Pinellas County Courts, identifying the 44-year-old as a menace to society.

On a social media post, the CPD wrote, “David H. Berry, 44, of 1310 Boylan Ave. was charged with aggravated assault, a third-degree felony, after further investigation by the Clearwater Police Department and the Pinellas-Pasco State Attorney’s Office. He was arrested by members of the CPD Special Enforcement Unit and booked into the Pinellas County Jail.”

The department shared that Berry, “armed with an assault rifle, unlawfully threatened violence to a landscaper and his daughter and there was a well-founded fear that such violence was imminent, according to the arrest warrant. The threats occurred after a parking dispute on the street in front of Berry’s home.”

Video of the confrontation was taped by the younger Lee, shared on social media, and submitted to the police.

“If the suspect had a problem with how someone was parking, he should have called the police and let us handle it,” said Slaughter. “You don’t arm yourself with an assault rifle and threaten someone over something so trivial.” In an interview with Creative Loafing Tampa Bay, Slaughter shared the earlier action taken by both organizations to relieve the man of all of his weapons.

Slaughter said, “We were able to obtain a risk protection order, and I’m grateful because I don’t believe that this gentleman is acting rationally, and I believe that we’re safer today than we were a week ago.”

“We were able to develop some other information that allowed us to apply for a risk protection order.”

While the chief explained his department pulled from other sources to support the claims needed to secure the risk protection order, including various red flags from his past that indicate he should have the weapons at this time, he did not detail what they were.

He did mention, a PCSO deputy tried to serve Berry a subpoena, but an altercation between the law enforcement agent and the man made the effort unsuccessful.

Berry spent less than five hours incarcerated and was released from jail after posting $5000 bond, the Tampa Bay Times reports.

Winding-up order made for Sousa’s Landscaping – The Royal Gazette