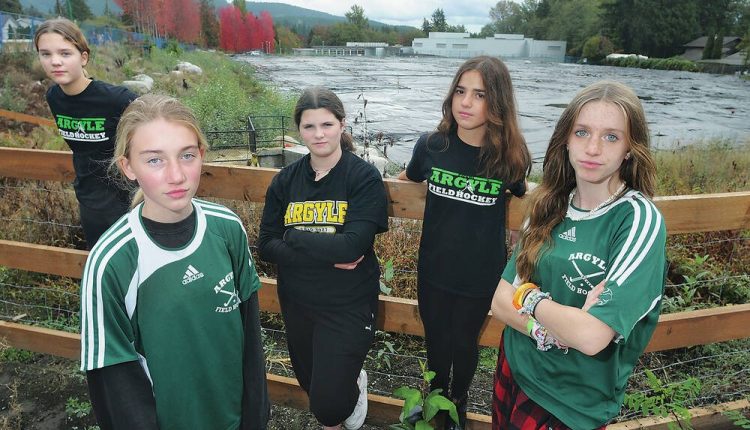 Parents of field hockey players at Ecole Argyle Secondary say after waiting years for construction to start on a new artificial turf field at the school, they were recently shocked to discover there were no plans to include their sport on the new outdoor playing surface.

Tara Dowling-Schafer, the mother of a teen field hockey player at Argyle, said she was taken back to learn recently there had been no plans to include lines for field hockey on the artificial turf field, which the District of North Vancouver is building at the high school under an agreement with the school district.

The field is being designed to accommodate sports like soccer, rugby and football, and could easily be “multi-purpose” turf the way it is at other schools, including Carson Graham and Sutherland, said Dowling-Schafer.

The sports that are played on a field have an impact on the type of artificial turf that is installed as well as the lines that get painted on to it. Turf pile heights can vary, with longer grass blades better for some sports than others. Other types can more easily be used by multiple sports.

Dowling-Schafer said she was recently shocked to hear from the District of North Vancouver that field hockey hadn’t been flagged as a priority sport by the school district – especially as it’s one of the few sports dominated by girls, as opposed to sports like football and rugby, which are dominated by boys.

“What does this say about women’s sports?” she said. “How can they have women’s field hockey and not have a field? That literally makes no sense.”

She isn’t the only one worried. Recently, Charlotte Burns, general manager of the West Vancouver Field Hockey Club, wrote to the municipality to voice the club’s concern about the potential exclusion of field hockey from the turf at Argyle.

“We hope it is not due to field hockey being a ‘girls” sport in high school,” she wrote, noting most of the club’s members are from North Vancouver.

Leslie Jaremchuk, chair of the Argyle parent advisory council, said other parents at the school also didn’t know that field hockey was being excluded from the field design and were shocked when they found out.

“We have been consulted zero as a PAC as far as anything to do with the field,” she said. “We’ve been sitting here asking for the last year and a half, ‘What’s happening with the field?’ and been getting zero information.”

According to the District of North Vancouver, as the design currently stands, “Soccer, football and rugby will be the sports accommodated by the turf field.”

In earlier discussions with school and school district stakeholders, “soccer, football and rugby were named as priority sports,” said district spokesperson Courtenay Rannard. “Field hockey did not emerge as a priority.”

Currently, “We are having conversations with the school district and the school to see if that’s something they want to further explore,” she added.

Rannard said there is still time to change the field specifications if the school and school district request that. But “potential cost and schedule implications would need to be assessed.”

Delays in getting the artificial turf field built are already a sore point with athletes and parents at Argyle.

Provincial funding for Argyle did not include money for an artificial turf field, so the District of North Vancouver agreed to pay for one to be constructed at the high school that could also be used by the community.

Because the new school – which opened six months behind schedule, in January of 2021 – was built on the footprint of the old school field, athletes at Argyle were necessarily without an outside area to practice on during the years the new school was under construction.

Many parents expected construction to start shortly after the new school opened.

Argyle athletes without field for 4 years

Instead, there were lengthy delays as the school district and municipality hammered out legal details of who would be responsible for maintenance, upkeep and operation of the field, including what happens when the field needs significant upgrades. The two parties eventually agreed to a 25-year deal, with the municipality taking the lead role on the field.

Wade Simmons is a parent who lives just two blocks from the high school who has two elementary school-age kids. He wonders if his son – currently in Grade 7 – will have a field to play on by the time he moves up to secondary school.

“There’s nothing going on,” he said. “I drive by that field on a daily basis. Nothing’s changed.”

According to the municipality, the district is currently accepting responses to the request for proposals on the turf material. No visible construction is expected to start until the beginning of 2023. The field is scheduled to be ready in September 2023.