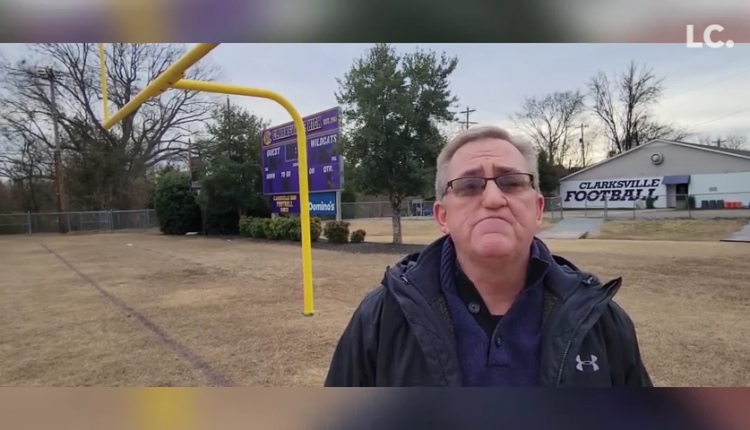 CMCSS activities coordinator John Miller talks about the impact a middle school program will have on high school football in the city.

John Miller’s work behind the scenes in re-establishing a middle school football program overseen by Clarksville-Montgomery County School System has drawn universal praise from high school coaches across the city.

But the CMCSS Programs and Activities Coordinator isn’t finished.

Miller is entering his sixth year with the school system after spending time as football coach at Clarksville Academy and Rossview, as well as Rossview’s athletics director from 2007-17. Miller doesn’t know how much longer he’ll remain in his current role, but he’s not wasting a single minute.

He has a vision of an expanding athletic footprint in Clarksville, and among the more interesting projects on Miller’s table is his desire to see high school football fields converted to artificial turf.

“That’s big for me,” Miller said. “Improving the facilities in the city is big, especially in the stadium football fields, because so much is played on these fields. You’ve got football, JV football, girls soccer, boys soccer and middle school football is coming. It would be nice to transition to field turf.”

Miller said he’s been working on it for nearly a year and now has more data to help his cause as he works with CMCSS head of school Jean Luna-Vedder about how to navigate the cost.

Last month, the City of Nashville announced plans to launch a $15 million project to upgrade 13 high school football fields and two soccer fields in the city with synthetic turf. The Tennessee Titans agreed to donate $5 million, over five years. Another $5 million will be funded by Metro Nashville Schools and the last $5 million will be raised through The Fans Inc., a private fundraising effort.

The Williamson County school board and commission approved $3.6 million –$1.2 million for each school – for field turf at Centennial, Fairview and Ravenwood before the start of the 2021 football season.

Miller has looked into fundraising for Clarksville’s eight public high schools, that will include Kirkwood High next fall. But, in addition to what CMCSS would pay, Miller would likely have to get help from private businesses.

“It would have to be on an incremental basis,” Miller said. “If we looked at maybe doing two high schools a year, that would be a four-year span of trying to get field turf on every high school in town. Do I think it’s feasible? I’m hoping that it is.”

The turf idea has been floating around for years, and the chance to save money in the long term could outweigh the cost to install it. Coaches spend countless hours, and money, mowing, irritating, and re-sodding fields to keep them functional. They also spend summer months preparing for the inevitability that natural grass is chewed up by late October and November. Artificial turf would eliminate many of those weekly costs.

“I want to see athletics grow in Clarksville,” he said. “I’m just like parents in coaches in this city, I want to see these kids excel. I get as big a kick out of it as anyone would.”

Girls high school flag football has been added to Clarksville this spring. The success of its pilot program in Williamson County, supported by the Titans, led to 15 Nashville public schools joining this spring along with all eight Montgomery County public schools.

“That’s another opportunity for girls and it’s completely funded by the Titans this spring, and it’s becoming hugely popular,” Miller said. “So we’re trying to get ahead of the game on that, but that’s also another activity on our football fields because it looks like flag football could become the next TSSAA-sanctioned sport.”

Want to stay informed on the latest high school and college sports news? A subscription to The Leaf-Chronicle gets you unlimited access to the best information and updates on prep sports, Austin Peay and the ability to tap into over 200 local sites in the USA TODAY Network.

Reach sports writer George Robinson at grobinson@gannett.com or (931) 245-0747 and on Twitter @Cville_Sports.

If there is a film on Four Seasons Total Landscaping, remember you read it here first!