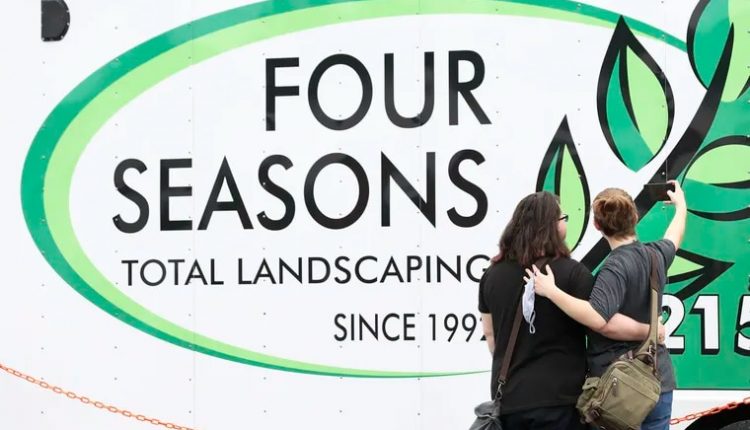 If there is a film on Four Seasons Total Landscaping, remember you read it here first!

The Black List is an annual list that names the hottest unproduced screenplays in Hollywood. The list was first published in 2005 by Franklin Leonard, a development executive who once worked for Overbrook Entertainment, the production company co-founded by Will Smith and named for his West Philadelphia neighborhood.

The Black List is assembled from a survey of Hollywood producers and other decision-makers who vote on the top unproduced scripts they have read in the last year. Argo, The King’s Speech, Slumdog Millionaire, and Spotlight are some of the list’s shining alums. 2013’s American Hustle, a fictionalized version of the Philadelphia-associated Abscam scandal, has also been on the list.

This year’s Black List arrived Dec. 12, and included a screenplay about one of the most notorious events to take place in Philadelphia in the last few years.

The script, called Total Landscaping, purports to tell the story of that day in Nov. 2020 when Donald Trump’s presidential campaign, led by Rudy Giuliani, inexplicably held a press conference outside of Four Seasons Total Landscaping, a family-owned landscaping business in Northeast Philadelphia. During the press conference, held in a strip mall that also included a crematorium and a sex shop, the major networks called Pennsylvania and the election for Joseph Biden.

Since then, the Total Landscaping location has become a popular destination, and the company has posted merchandise sales reportedly in the millions.

The Total Landscaping script is credited to Woody Bess. Per the description, the screenplay describes “a day in the life of the employees of Four Seasons Total Landscaping and its neighboring businesses on November 7th, 2020: the day an average, working-class strip mall in East Philadelphia [sic] became the focal point of the most divisive presidential election in American History.”

Should we be wondering what tack the eventual film might take, whether it will be filmed locally, or who might be cast as Rudy Giuliani in his most prominent movie appearance since Borat Subsequent Moviefilm?

Probably not, at least not for a while.

Bess, the writer, is a Massachusetts native and USC grad, who is currently directing a movie and was not available for comment. But the Inquirer spoke to his manager, Jeff Portnoy, who is credited in the Black List listing.

Portnoy described the script as “more inspired by a true story than a true story,” and that it was based on extensive research done by Bess. The script has not yet been optioned, purchased, or taken any other steps towards becoming a motion picture. In fact, it may not become a film at all.

Portnoy explained that the Total Landscaping script is what is known as a “stunt spec.” That’s when a writer writes a script, often of a TV series episode (but also sometimes a movie), in which the goal isn’t so much for the film to be produced than for producers, agents, or studios to notice the writer’s talent and hire that person to write something else.

The idea, Portnoy said, was to “put them on the map, and make a fun read for the industry … they get general meetings out of it and get agency representation.”

This was the case with the 2019 Black List script Barron: A Tale of Love, Loss & Legacy, which spun an imaginative tale out of a then-10-year-old Barron Trump sabotaging his dad’s run for president. That film, for various and obvious reasons, was never made but its writer has since gotten some studio work.

The Total Landscaping script, however, Portnoy said, is a bit “more producible”, and while it could eventually attract interest from directors or producers interested in making it, that hasn’t happened yet.

The screenplay was not written with the cooperation of the people who own the Total Landscaping business, but Portnoy said that should a major producer or studio come along, they would speak with the business’ owners.

Four Seasons Total Landscaping did not respond to an email requesting comment.

The 2021 documentary Four Seasons Total Documentary, debuted on MSNBC on the first anniversary of the day in question. And the footage from that day is locked to appear in numerous future documentaries about the 2020 election.