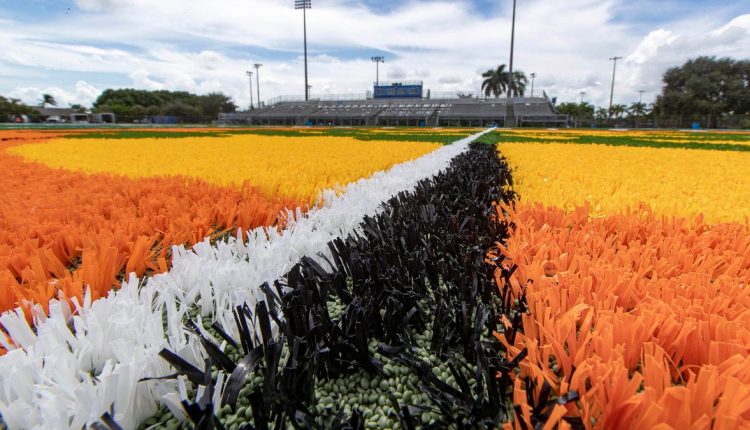 WELLINGTON – Home to polo fields and equestrian lands, Wellington is built on its natural greenery.

Now, however, the village that could say its lush grass is its fortune joins the list of municipalities in Palm Beach County that have approved some use of artificial turf. Cities that include Royal Palm Beach, West Palm Beach and Delray Beach all have allowed limited uses of turf in their areas.

In Wellington that means homeowners will soon be allowed to border their driveways with small amounts of synthetic turf, but, according to a plan tentatively approved at a January council meeting, they won’t yet be able to turn their backyards into sites that remind the eye of a golf course putting green.

With use of artificial turf in Wellington currently a code violation, it’s a small step for residents who want a low-maintenance means of brightening their landscapes.

The council has no plans to allow artificial turf in residential front yards, Stillings said.

One man’s laboratory: Artificial turf front lawns just may be an idea whose time has come | Frank Cerabino

Struggling to stay green: A lethal scourge is infecting Florida’s favorite grass and there’s nothing to stop it

The use of turf in backyards was a point of contention between council members. They will evaluate the issue further before setting a policy in the second reading of the ordinance Feb. 22.

The previous regulations only allowed artificial turf on government-owned property, with the synthetic grass mainly seen in schools and athletic fields.

while Councilman Michael Drahos was the sole council member who voted against the approval of the plan when it came up for a vote Jan. 25, his objection was not to artificial grass.

“I just think that we are going beyond our discretion to now tell people that we are not willing to let you put something in your own backyard,” Drahos said.

Discussion delayed on use of turf in backyards

Mayor Anne Gerwig says the natural environment that she loves is what makes Wellington special.

The proposal for the use of turf in backyards would allow up to 75% of the yard to be covered, with the caveat that any area with artificial turf not be visible to anyone passing by on the street. A 15-year warranty from a company using American-made turf would also be required.

Most municipal plans in Palm Beach County are similar to the proposed restrictions on the amount of turf that is allowed for use and where it can be placed.

At the same time, areas that include Wellington neighbors Greenacres and Loxahatchee Groves have not allowed the use of turf in their cites.

The case for artificial turf

In Wellington the installation of turf at Kobosko’s Crossing, a shopping plaza on Forest Hill Boulevard just east of the Mall at Wellington Green, sparked a code violation case, as well as consideration of changing a policy residents have expressed interest in discussing over recent years.

Both the plaza owner and the installer were unaware of the current regulations that didn’t allow turf to be used. The plaza installed artificial turf in islands in parking areas and along the sidewalk, areas that can be difficult to maintain with natural grass.

Damien Newell, the project manager for the artificial turf proposal, said that artificial turf could be the answer for areas of natural grass that have limited space and are hard to maintain, much like the areas installed in the plaza.

Newer turf no longer feels like carpet, although it still has a rugged stiffness that distinguishes it from the soft cushioning of normal turf. With multiple layers, turf sits atop a combination of natural grass, synthetic materials and turf fibers.

The chemicals used to create it raised concerns about whether it is eco-friendly. So does the way it can smell without proper cleaning.

The turf retains heat more than grass, and according to the staff report turf can be up to 40 degrees warmer than natural grass. If it is used broadly in backyards and other places, Wellington residents and their pets would have to steply cautious on their artificial lawns on hot days.

Odors can build from pets using it or from heavy rains leaving a lingering stench of mildew. To get the odor out of artificial turf, users will have to use antibacterial solutions to clean their lawns.

Newell said these concerns are addressed with the newer generation of turf. Recent designs use synthetic materials and infills, small rubber or sand products spread between artificial turf, that help turf stay cool and have a grass-like feel.

The council expressed some concern about the environmental impacts of turf, but the primary focus for the council was the amount of turf they are willing to allow in residents’ backyards.

“I’m not prepared to allow this to have a residential application and certainly not at a 75% coverage footprint,” said Councilman Michael Napoleone. “That’s a huge number.”

Putting artificial turf in backyards would make maintenance easier for residents, but natural grass and its environmental benefits make the maintenance worth it in Gerwig’s eyes.

“I like things that are natural, grass functions to turn carbon dioxide into air. It’s part of our environment,” said Gerwig. “It might take maintenance, but life takes maintenance, and we’re big on maintenance in Wellington.”