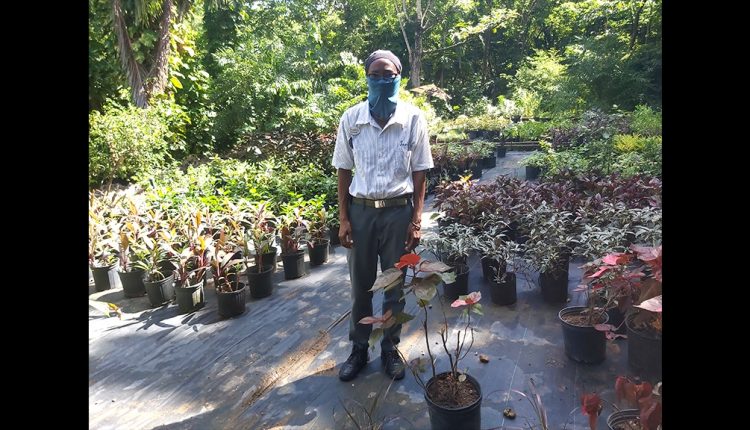 Young Marchand woman making her mark in landscaping at Sandals

Landscaping has historically been dominated by men in both management and the ground crew.

Despite being a traditionally male dominated industry, some women rise to the top and are determined to capture their share of the immense market.

23-year-old Frannie Wilkie of Bishop’s Gap, Marchand, who works at Sandals La Toc, paved the way for female landscapers in St. Lucia. Despite the stigma surrounding Marchand, the only woman landscaper at Sandals Resorts has proven that women can thrive in just about any setting if they have the passion and drive.

Frannie started working at Sandals La Toc a little over a year ago. Although she initially applied for a job as a housekeeper, she was referred to the landscaping department due to her strong agricultural background. She also had an associate’s degree in this field.

From the start, Frannie stood out from her colleagues. She showed a real passion and determination to perform exceptionally well in her job. Within a few months, she switched from working in the flower beds to studying and doing more administrative tasks within the department.

She told Loop News how great she feels as the only woman in the department.

“It feels great you know because I’m recognized as the only woman who works in landscaping. When I was just starting out, a lot of people were watching me and were surprised. It somehow convinced other women that they wanted to participate, but I’m still waiting to see if they will. As the only woman I am recognized and I think that will take me far. “

The young landscape designer said it was her dream to head the department in the future.

“If I were to become a landscape manager, I would be very proud. I would have the feeling that I have achieved something because that is one of my goals in the near future, to become the first female landscape manager in St. Lucia. I don’t think I want to change anything in the department, other than develop or improve it. But with the manager I currently have, I think he is doing his best to make sure everything is going well. “

Meanwhile, Frannie has received massive support from her work colleagues, particularly her manager, Omar Anthony Parkes, who is beaming with pride at her accomplishments to date.

“To be honest, I’m very impressed. I’m also glad a woman stepped on the plate that you know because people see it as a male-dominated job, but things and times have changed. And to see a woman from St. Lucia show up. You should know that we have more than just a sandal and as a brand we promote from the inside out. So this is a big step for the company too. “

“So far she is training to be a supervisor, but the management material is also there and that is the level I take her to. It is my dream for her to win her as a manager and not as a supervisor. But you know, it has to be done step by step, ”he continued.

According to Parkes, Frannie showed outstanding potential from the start and the company is taking her to the next level.

“At Sandals, we’re not here to hold anyone. You have the potential; We will take you to the next level. She also takes many courses at Sandals Corporate University (SCU). She has done a lot of courses so is on the right track and as I said, I’m very proud of her. “

To date, Frannie has completed a total of 46 courses and is in the middle of the 47th course. She has studied areas such as general administration, coaching and mentoring and trained the trainer.

As well as playing landscaping, Frannie loves to play soccer too. He is the captain of the Marchand women’s soccer team and also the big player team. She has represented St. Lucia in football several times.

What to avoid when recruiting for your landscaping business