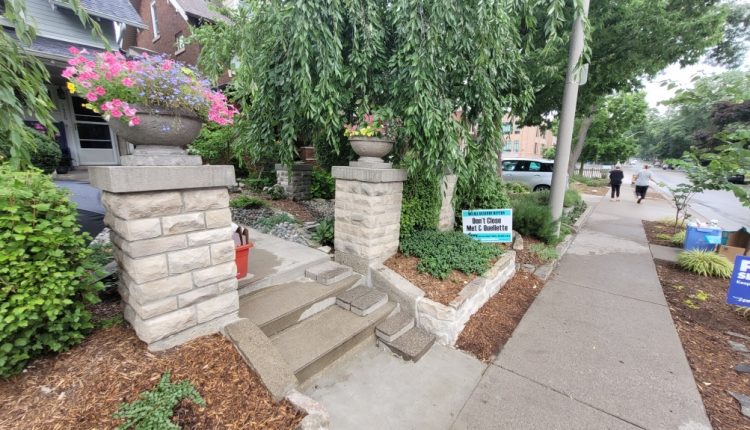 A group of neighbors in Windsor, Ont. are hoping the city will reverse a bylaw that prohibits residents from placing plants and other personal items near the sidewalk without a permit — but city officials say the bylaw is needed to ensure everyone’s safety.

Following a complaint regarding the landscaping outside her home, Elizabeth Hanes received an order by the city which noted she and three other homes on the block were in violation of Bylaw 25-2010.

The municipal right-of-way is considered to be one foot from the edge of the lawn to the end of the curb which includes the small strip of land in front of the sidewalk.

Hanes and three other neighbors living on Victoria Avenue received a follow-up order on July 18.

According to documents issued by the city, the homeowners now have until Aug. 2 to “remove personal property from the public right-of-way and reinstate the boulevard to City of Windsor standards.”

For Hanes, the original order came “out of the blue” since one of the four homeowners had naturalized their yard about 15 years ago.

Hanes said her sidewalk easement has mulch in it with low ground cover. Along the edge of her lawn is a stone border that has been in place for about 15 years.

Judith McCollough said her home has Heritage designation and these pillars were part of it when she bought the property decades ago. The city has ordered her to remove them as they are too close to the sidewalk. (Sanjay Maru/CTV News Windsor)

To comply with the city’s order, all of that would have to be removed.

“That’s why we started a petition on Saturday, asking residents to sign it so that we can change the bylaw regarding easements and one foot on the other side of the sidewalk,” she says.

Hanes adds, “If you take a look at the City of Guelph’s bylaw regarding easements, it is very progressive. Not only are they saying you can have other ground cover, they’re encouraging people because they’re recognizing that it’s good for pollinators. It is good for trying to keep water from flooding into our systems.”

Another neighbor who received a similar order, Judith McCullough, has pillars at the front of the walkway leading to her front door. Due to its proximity to the sidewalk, the city has ordered her to remove the pillars — even though they were part of the original design of her home which, she says, has heritage designation.

“As a senior, I’m doing what I can to live in this house,” says McCullough. “My neighbor’s had their lawns naturalized for ten or twelve years.”

Andrew Lewis, coordinator of right-of-way and field services for the City of Windsor, said the existing rules have nothing to do with stopping homeowners from naturalizing their properties.

Rather, it’s about ensuring passersby do not, for example, kick stones or mulch on to the sidewalk where a cyclist could possibly ride over it and fall.

“The engineering best practice for landscaping in the right-of-way exists to try to limit the liability. When adjacent property owners want to beautify the public right-of-way, it has to be done in a safe manner,” says Lewis.

He said the city’s “best practices” for landscaping allow for items such as flowers, plants, bushes or shrubs to be placed within 0.3 meters (one foot) of the sidewalk⁠ — as long as the property owner has a permit or signed encroachment agreement to put them there.

The height of said plants cannot exceed 0.9 meters (three feet), he added, and all personal items placed along the easement must be maintained to ensure they don’t risk being transferred to the public sidewalk.

“The City of Windsor encourages beautification of our beautiful city, as long as the landscaping is undertaken adhering to the best practice,” says Lewis. 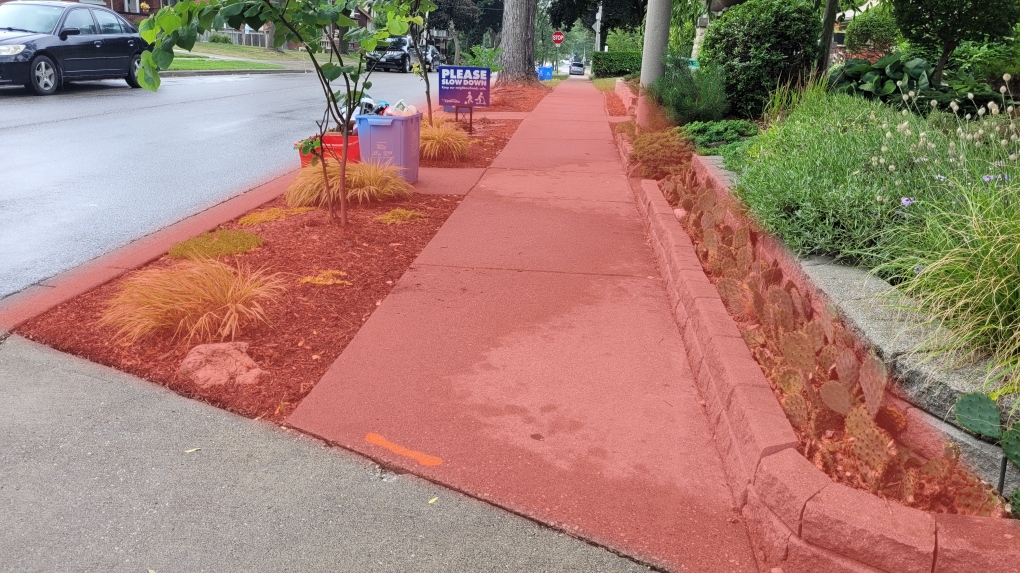 The red area indicates where a Windsor homeowner cannot place personal items, without a permit or encroachment agreement, due to the city’s existing rules surrounding landscaping. (Sanjay Maru/CTV News Windsor)

Ward 3 city Coun. Rino Bortolin estimates there are “tens of thousands” of homes in Windsor that unknowingly violate the city’s best practices.

“For example, if you drive along in a neighborhood and see a big huge boulder at the corner of a driveway that’s right on the street, that is technically on city property and would need an encroachment agreement,” he says, adding the existing rules around landscaping are complaint-based.

Bortolin adds, “If somebody in the neighborhood was walking by, tripped, fell, hurt themselves or just called the city to complain, then by-law has to go out and take action on it because it becomes a liability for the city at that points.”

Bortolin says the city made changes to the landscaping bylaw back in April, permitting plants “under four inches” in height. Prior to that, the public right-of-way could only be covered in grass or AstroTurf.

But he added red tape needs to be reduced so homeowners can naturalize their properties however they like, as long as it’s done safely.

“Instead of putting up roadblocks, like permits and encroachment fees, we should be encouraging it and working with them to make it as easy as possible,” says Bortolin. “I think that’s the problem here. It’s not so much some of the rules. Some of the rules, I think, do make sense.”

According to city officials, a public works permit currently costs $212.

After paying that fee, Bortolin says an inspector would need to visit a homeowner’s property to ensure the placement of their landscaping items comply with city bylaws.

“I think the conversation should be how we can reduce that barrier to actually do something good and beautify the right-of-way for people and also make it more naturalized. If we are doing things like good ground cover that’s good for rain, storm water runoff and things like that, then we should be encouraging that,” he says.

As examples, he believes the city could subsidize existing permits or allow residents to opt-in to a program — similarly to Windsor’s rental licensing program — in which anyone who has not opted in would have to pay all the fines associated with a landscaping complaint.

Bortolin says enforcement of the order, issued to the four homes on Victoria Avenue on July 18, has been placed on hold.

The Ward 3 representative said he plans on bringing up this topic at city council’s next meeting in August.