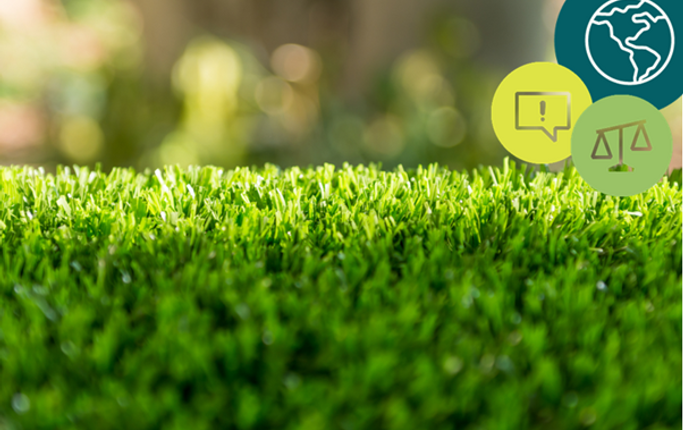 As the winter months set in and more of us see our lovingly tended lawns begin to struggle in the cold, some consumers might be considering the benefits of artificial grass. The ASA has ruled on a few ads for artificial grass, and these have highlighted two key areas for marketers to be mindful of. Read on for some tips on how to advertise ‘fake grass’ without breaking the rules.

Before making claims about environmental benefits of artificial grass, advertisers should be aware of the rules on this type of claim. Two ads for artificial grass recently breached the code because they described the product as “eco-grass” and “eco-friendly” but didn’t have the evidence to back up their claims.

If an ad includes an ‘absolute’ environmental claim (eg, that a product is “eco-friendly” or “green”), then advertisers need to hold evidence that the product has no negative environmental impact across its entire lifecycle. The only exception to this ‘absolute’ requirement is if the ad makes clear that the claim is based on something more specific, such as a particular part of the lifecycle or a particular component. In the case of artificial grass, the total lifecycle includes the materials it’s made from, the production process, how it’s transported and disposed of, as well as its day-to-day use and upkeep.

When the ASA recently investigated an ad that claimed “Soul Eco-grass is recyclable”, they asked for evidence about both the claims “Eco-” and “recyclable”. The ad didn’t make clear that “Eco-” only related to part of the product’s lifecycle, and they didn’t provide sufficient evidence to back up either claim, so the ad breached the code.

In another recent case, the ASA investigated the claim that artificial grass was “eco-friendly”. Again, the advertisers couldn’t back up the claim “eco-friendly” with evidence about the product’s environmental impact across its full lifecycle.

If you’re unsure about the requirements for environmental claims, we have lots of resources to help clear this up. You might also want to try out our new e-learning module on Climate Change and the Environment.

The ASA understands that the industry term for installing turf is “laying”, and it might be tempting to spice up an ad for artificial grass with a pun on the word’s other meaning. But several ads that have played on this double meaning have breached the code, because they did it in a way that offensively depicted women as sexual objects.

In a recent case, ASA investigated a billboard ad that featured the claims “artificial grarse experts” and “get laid by the best”, alongside an image of a woman dressed only in underpants and lying on her front, in a pose which exposed her buttocks The ASA considered that the text, together with the model’s pose and state of undress, was sexually suggestive and would be seen as presenting the model as a sexual object. This ad for Great Grass MCR Ltd breached the code for these reasons.

However, this wasn’t the only fake grass ad that has breached the code on these grounds. In 2017, the ASA ruled on another ad that included the headline “The best way to get laid” along with an image of a woman’s bare legs, wearing high heels and standing on grass. The ASA considered that this had the effect of demeaning and objectifying women by presenting them as sexual objects, and so the ad breached the code.

Another ad for Great Grass MCR Ltd breached the code in 2016. It featured an image of a woman wearing a bra, cropped so that it focused on the model’s breasts, next to an image of a lawn. The headline stated, “REAL OR FAKE?”. The ASA ruled that it breached the code, because it had the effect of demeaning and objectifying women by using their physical features to draw attention to the ad.

One of the perks of artificial grass is that it’s easy to keep it clean, and advertising is no different – and if an ad includes a suggestive pun, make sure it’s not an offensive one.

For bespoke advice on non-broadcast ads to help ensure you’re not asking by a mistake in the grass, our Copy Advice team are happy to help.