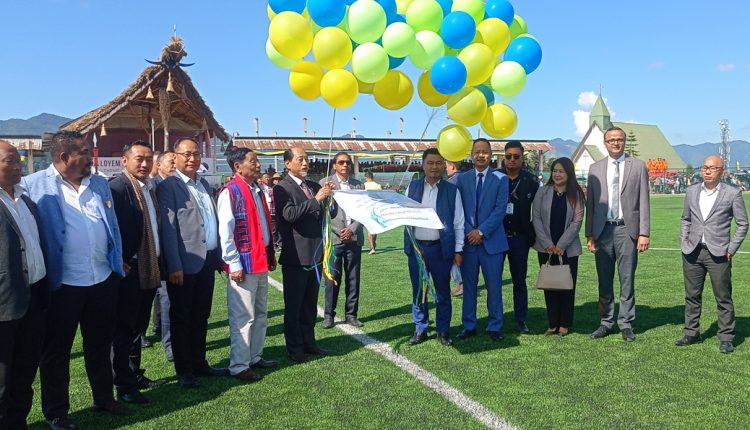 Chang Wetoshi Setshang (CWS) is organizing this year’s edition of Loyem Memorial Trophy on the theme “Goal for Friendship” and the tournament is held at the new artificial turf ground in the district headquarters.

Speaking on the occasion, Rio pointed out that Nagas are very talented in the field of sports, exemplified by the likes of Olympians Dr. T. Ao and Chekrovolu Swuro, but has failed to produce more such sportspersons due to Naga issue and poor infrastructure.

“To lift the society, youths must be uplifted,” he said, while maintaining that commitment and determination are needed to excel in any field of sport and must be a “full time” endeavor.

Responding to CWS’ representation mentioning the need of having a rostrum or stadium for young sports enthusiasts, Rio said it could be looked into under programs like Khelo India but the state government can also sanction the same considering the necessity.

He urged all the 12 teams to participate with the spirit of sportsmanship, discipline and skill. “Always carry forward the essence of friendship and unity,” he said.

“I urge the young people of Tuensang to dedicate themselves to reaping the benefits of this facility and there will be no doubt that the district will soon produce sportspersons of international caliber,” he also tweeted.

“My government is committed to empowerment of the youth through sports and games. We are in the process of developing new and modern sports infrastructure in different parts of the state,” he added.

There is no favoritism or partiality in sport; the ability, skills and performance define a good sportsperson, he added.

Speaking on behalf of the Loyem family, MLA Toyang Changkong Chang said Tuensang is the second district in the state to have an astroturf football ground after IG stadium in Kohima. He said this “signifies the love, concern and commitment our CM has for our district in particular”. He also said that having such a sports complex not only benefits sport personalities and athletes but also the entire society as it brings individuals from all walks of life and boosts social cohesion, focus and determination.

President CKS Nungsang Lemba thanked the chief minister for providing facilities and development to the district, saying “this (inauguration of artificial grass ground) is one of the happiest days for sportspersons and the people of Tuensang”.

It may be mentioned that the artificial grass installation work began in October 2021 under the State Plan after the project costing INR 4.25 crore was sanctioned in the same year. The total green area of ​​the playground is 110x74m, while the court area measures 104x68m, it was informed.

I Moanungsang, one of the officials in charge of the project, had earlier told Eastern Mirror that the football ground would be at par with international football fields in terms of quality and specifications.

Also speaking at the event on Saturday, President of Angami Sports Association, Lhoubeizo Kesiyie, said that only Chang tribe accepted their challenge of forming a wrestling association during their 50th Meet at Kohima. He informed that as per their commitment, a coach will be sent whenever the association and participants are ready.