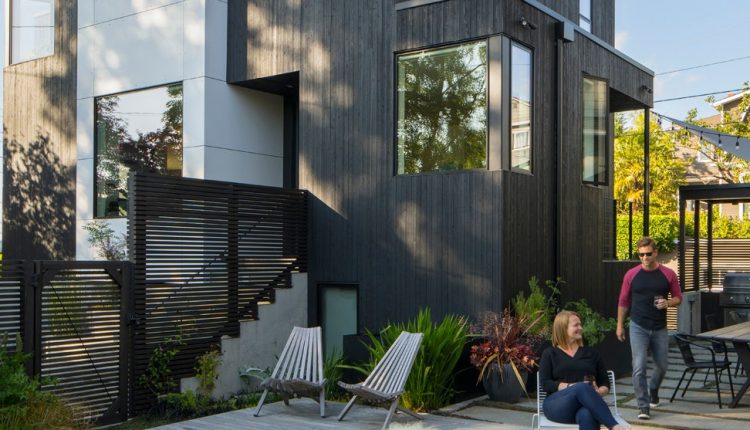 When Chase and Kate Jarvis bought their Seattle home, they knew it was going to be a project. The specification house was on awkward triangular lot, the front door was three meters above the sidewalk on a sloping road, and the poorly used, spotty lawn was bordered by what Chase calls a “drive-by fence.” “That said, it looked like they installed it as they drove past the construction site,” he says.

When it came to redesigning the outside space rather than challenging the funky topography and layout, the couple saw the opportunity to create zones for different activities: a patio for entertaining and cooking, a fire pit to relax, a spa Area with whirlpool and plunge pool for meditation and relaxation. They wanted to maximize the space and create an oasis that they can use all year round.

“Seattle has a lot of baggage on what people think of the weather,” says Chase, an artist and entrepreneur, “but we actually have a pretty amazing climate.”

The fence, with its contrasting cedar and concrete, also sets the tone for the programmatic zones inside, where the pull of hard versus soft, black versus white plays throughout the room. “We both wanted to be in the room,” says Kate, a producer and mindfulness teacher with a background in meditation. “I wanted softer rooms that felt contemplative, with beautiful plantings.” Chase, on the other hand, likes a clean, modern look.

They first hired general contractor Dovetail, a company they had previously worked with on commercial projects, and Dovetail joined the Jarvises with Robert Hutchison Architecture to bring their vision to life. The result, completed in 2017, “feels like a resort,” the couple’s friends say, with thoughtful spaces for entertainment and relaxation that feel distinct yet cohesive.

The first step was to remove everything – the boulders that were used for the construction site’s walls, the sloppy wooden fence, and all of the landscape – and redesign the construction site so that they could gain 800 square feet of floor space for a total of 2,700 square feet . Dovetail poured 275-foot, five-foot-high concrete retaining walls around the property and incorporated new staggered entry stairs that contain planters and create a larger front entrance.

A zen garden planted with ferns, grasses and green, sculptural flowers leads to the spa area, where the flooring transitions to a terrace made of black stone slabs in organic shapes and ipe terraces around the circular plunge pool and the rectangular hot tub .

6 Backyard Design Rules You Should Break in 2021