Sustainable Commission to City Council: No on Artificial Turf at Brace Park Fields 

Artificial turf vs. natural grace on the ball fields at Brace Park?

That question was circulated at the different advisory boards and commissions in Burbank recently. Both the Sustainable Burbank Commission and Park and Recreation Board have weighed in at recent meetings,

At their meeting on September 19, the Sustainable Burbank Commission voted to send a memorandum to the City Council not to convert the fields at Brace Park from grass to turf.

Among the Commission’s findings were the health impacts of artificial turf, which sheds microplastics laden with a chemical group known as PFAS. The Commission says the EPA may impose PFAS national drinking water regulations later this year. If this happens, the turf would have to be removed, and grass would have to be replanted to protect the reservoir below.

They were also worried that plant-based infill of sand, olive pits, and cork would be subject to mold and fungi growth, with the cork dust causing Respiratory disease.

They went on to reason that a natural grass field at brace park is the only safe choice for the community, the drinking water, and the environment.

At the September 8 Park and Recreation Board meeting, the Burbank Park and Recreation staff sought the Board’s approval to recommend the artificial turf to the City Council. After hearing a presentation and asking some questions, they were not inclined to make a decision either way and just noted and filed the report.

Burbank’s Park and Recreation Department depends on those two fields more than anybody else. In their report, they said they had to way the environment versus community needs and the fact that they would lose two ball fields.

Some of the reasons they brought up included that they must use regular potable drinking water on the fields because they are above a reservoir and cannot use the recycled water that other fields use. They did not know, however, how much water would be saved because the artificial turf would also need water as part of its maintenance.

What was surprising were the costs that were involved in the project. Staff said the initial installation of the field would be more than $3 million and that the field would only last anywhere from 8 to 12 years. On the other hand, if they stayed with natural grass, it would have to be replaced every four to five years for $500,000. 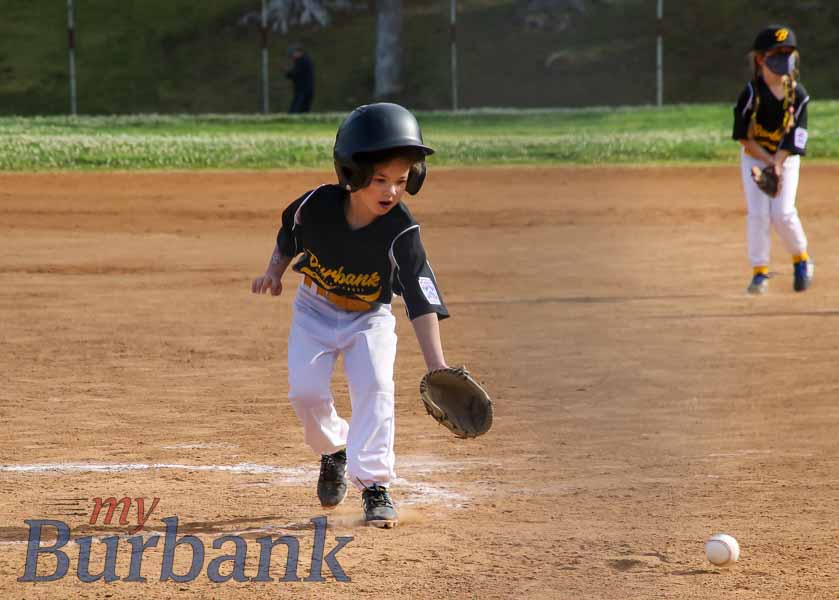 That basically shows that even if the price of the turf is half of the initial installation and needs to be replaced every ten years, it would still be more than the cost of putting new grass in every five years. They also said the maintenance cost for the city would be $15,000 less a month because the city staff would not have to mow the lawn. It was not taken into account, however, the cost of maintaining the turf by outside firms.

In the staff report, one of the benefits they said of having a turf field would be that after rainstorms, they would be able to be used immediately compared to the current fields that are down for ten days after a storm. It was not mentioned that if they bought rain tarps, like those used at baseball fields, and run about $7000 each, they can provide the same result as artificial turf.

Park and Recreation staff could not provide the board with enough answers to their questions and the costs involved in transforming the field from grass to turf, which led to the board members taking no action either way.

Below is a copy of the memorandum that was sent to the Council:

An advisory body to the Burbank City Council, the Sustainable Burbank Commission recommends that City Council oppose artificial turf for the Brace Canyon ball field for health and environmental concerns, as well as financial risks.

The price tag of approximately $3 million is outdated by two years and does not take into account costs for repairs, removal, disposal and replacement every eight years, and the possibility of early forced replacement with natural grass as state and federal PFAS regulations escalate for products and drinking water. PFAS in artificial turf is surely on the radar. No cost comparison has been provided as yet by the Parks Department for alternative natural grass management and potential replacement of natural grass every 3 to 4 years. However, a recent similar proposal for ball fields in Westfield, NJ, indicated that the cost of installation and maintenance of natural grass would be about a third the cost of artificial turf over a ten-year life cycle.

Commissioners have had an opportunity to review the extensive materials sent to City Council by David Eisenberg, Sierra Club, Verdugo Hills Chapter. (See links at the end of this Memorandum.) BWP and the Parks and Recreation Department presented additional information to commissioners regarding the reservoir under the ball field at Brace Canyon and on field maintenance and usage challenges.

Commissioners also studied the staff report provided to the Parks and Rec. Board and support a combination of Option One and Option Three. The Commission recommends waiting for one to two years and maintaining current field care before taking any action at Brace field. In this interim period, the Parks Department can plan for Option Three in the staff report: explore alternative natural grass management and renovation, and possibly replace the grass field every three to four years or as needed.

Natural grass is by far the best choice for the Brace Canyon field. The downsides of artificial turf are well documented.

Additionally, in June of 2022, the EPA issued interim updated water health advisories for PFAS, indicating that negative health effects may occur with concentrations of PFAS in water that are near zero and that even miniscule amounts of PFAS are harmful. The EPA is moving forward with proposing a PFAS National Drinking Water Regulation in the fall of 2022. This is of critical concern as the reservoir under the Brace field is an aging buried concrete tank subject to contamination.

In August of 2022, the EPA announced it will designate two specific types of PFAS, linked to cancer, as hazardous substances, and require reporting of contamination in water and soil.

At Brace Canyon, PFAS-laden microplastics could leach into the reservoir. Yet a public records review requested by the Sierra Club revealed that the Parks Department and BWP are relying solely on a document from Teter Engineering provided by consultant Verde Design to assess the safety of artificial turf over a reservoir. Sierra Club discovered that “the report is out of date and written before PFAS were identified in artificial turf. There were no citations of any reservoirs with turf actually on top” but rather next to a reservoir. Furthermore, according to the Sierra Club, Verde Design takes no responsibility for the chemical properties of artificial turf, and states that some clients have hired third party testing consultants to assess environmental impacts and water safety.

2) Plant based infill (PBI) proposed for the field would contain sand, olive pits, and cork. Cork is subject to mold and fungi growth, and cork dust can cause respiratory disease. Weekly testing for hardness is required, and typical annual refill of this infill is 3.5 tons. https://docs.google.com/file/d/1MScmC4TVuWXtGLnJvy1R_xBOV2SMT3ue/edit?filetyp e=msword

3) Playing sports on artificial turf leads to more skin abrasions, putting players at higher risk of MRSA (methicillin resistant staphylococcus aureus, an antibiotic-resistant infection). Fields are treated with biocides to kill MRSA, and biocides come with their own health risks.

1) Contrary to the industry’s claims, the product does not save water. Properly cared for artificial turf requires substantial amounts of potable water for cooling, cleaning, and maintaining the moisture content of the infill. Although mowing time is obviously eliminated, the product necessitates maintenance hours for cleaning and cooling. https://drive.google.com/file/d/1_8-HwZjhrN78RelU9roKYArcN5ZsAcxP/view

2) Hole-punch backing is the industry standard for artificial turf, allowing water for constant cleaning and cooling to flow through. This would allow all the toxic substances listed above to flow into the reservoir: PFAS, biocides to kill MRSA, unknown pesticides and chemicals.

3) Artificial turf fields contribute to the heat island effect, increasing the need for air conditioning and energy use in the surrounding community adjacent to the field. (See NPR article above under heat danger to players.) 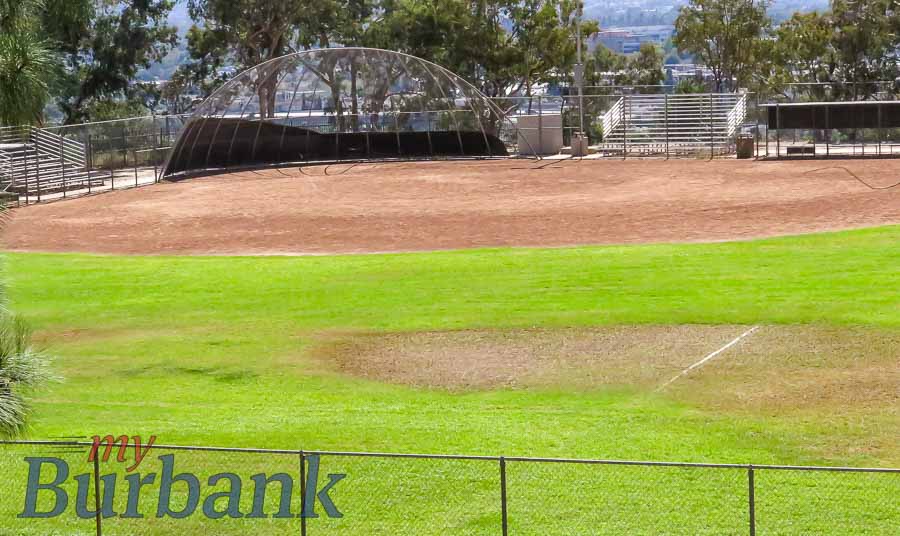 4) At the end of its 8-12 year lifespan, this proposed artificial turf field, comprising 85,000 pounds of polyethylene and 800,000 pounds of infill, would go to the landfill. Though the industry claims the product is recyclable, no actual recycling project for a removed CA field could be found.

Commissioners visited the Brace field on 7/28/22. The field (a double field, actually, with space for two games to occur simultaneously) was green and well maintained. The condition of the field is excellent, despite the Parks Department has to eliminate fertilizer use starting in 2019 due to state regulations for reservoirs. Parks and Rec assert this condition is only possible because of lack of use due to Covid restrictions. We encourage the exploration of alternatives to synthetic turf.

Grass Maintenance: Could Brace be adequately maintained with a type of fertilizer that would not put the reservoir at risk? Might worm castings be used? Might a different kind of grass be employed? Would a different type of turf management be the answer? The Sierra Club suggests applying for Measure W stormwater capture funding for natural grass athletic field projects that utilize greywater or captured stormwater. These funds can include money for ongoing maintenance costs. The Sierra Club recommendations for caring for natural grass above a reservoir include organic land care

Field Logistics: If the issue is partial that the Brace field is so heavily used during the school year, could rotating activities to less-used city fields be of help? Two fields within a few minutes’ drive of Brace, Palm, and Bel Aire fields are brown. Might these two fields be watered and used to lessen the burden on Brace? Fencing and improved lighting could bring Bel Aire up to speed.

The natural grass currently at Brace is the only safe choice for the community, our drinking water, and the environment. Given the countless harmful aspects of artificial turf, the Commission recommends exploring alternative options for a healthy, safe, and sustainable future for Burbank.

For reference, these are the materials already sent to Council by the Sierra Club opposing artificial turf:

Here is the first letter sent to Burbank: https://drive.google.com/file/d/1blDdJ365eyo5Nx7b6Pjo9hV62UYfXaKG/vie w?usp=sharing

Here is the 2nd letter sent to Burbank: https://drive.google.com/file/d/1ImbULbxuxw_MDWJsYrZtcaFMDYFuOL_q/ view?usp=sharing

6 Backyard Design Rules You Should Break in 2021