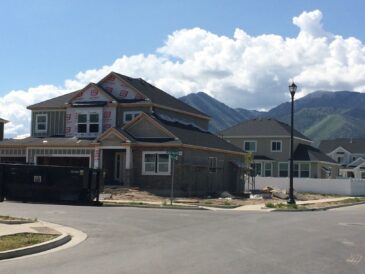 Residential homes are shown in Spanish Fork on May 28, 2016.

People kayak, swim and fish in the Spanish Oaks Reservoir in Spanish Fork on Wednesday, June 15, 2022.

Residential homes are shown in Spanish Fork on May 28, 2016.

Mark Vlasic and Aubrey Larsen, of Landmark Design, proposed a new water conservation landscaping approach for the city. Due to high water usage in residential areas, Landmark Design discussed their intent to encourage xeriscaping, in partnership with the Flip the Strip program, with members of the council.

Xeriscaped lawns require less water and utilize gravel, rock and stone as opposed to plants. According to the presentation, the city would play a part in water conservation through the public parks.

“With a xeriscape concept, parks really become valuable for providing that place to go out and recreate,” said Vlasic, president and owner of Landmark Design. “So it’s striking more of a balance where you don’t need to have lawn everywhere, that you replace it with pathways and with more water-wise landscapes.”

An important component in the proposal is to help guide residents in individual conservation efforts. Larsen, a landscape designer and planner, discussed the importance of developing information that is easy to understand and can “get people excited about a topic that might be intimidating, like water-wise landscaping.”

People kayak, swim and fish in the Spanish Oaks Reservoir in Spanish Fork on Wednesday, June 15, 2022.

She explained that accessible links or websites would provide guidelines and pictures to help aid in the landscaping renovation. The project’s intention is to encourage people to create beautiful environments, while using less water and, ultimately, putting residents in a position to prevent a worsening of the drought.

According to the presentation, the guiding document principles should include planning and design, soil preparation, plant selection, practical lawn areas, mulch, efficient irrigation and easy maintenance. Other topics would include education and ideas, options and examples, additional resources and entitlements, namely grants and public programs that offer financial incentives.

In addition to making information both accessible and attention-grabbing, seeks to “Establish requirements for new and major modifications to Commercial, Industrial, Civic and higher-density Residential and Developer-constructed Subdivisions.”

These changes would promote “an attractive and well-maintained community image through professional design” and align with code requirements from the Central Utah Water Conservancy District.

Estimates show implementation of the Flip the Strip program would save up to 10-20% of water. Additionally, artificial materials would not be considered as alternatives for lawns, as they could negatively affect the landscape appeal.

Several members of the public attended the meeting, commenting on Landmark Design’s proposal. One resident supporting the plan said they support the proposal because of its emphasis on “genuine impermeable materials” as opposed to artificial materials. The requirement is for 50% of the landscape to be plants, with the remainder being resources that don’t require water.

Concerning all projects in the near future, the money and time required is a major concern for the city council members. Members of the council encouraged a focus on the evolving nature of what is needed — mentioning job growth, migrations, labor costs and housing costs.

LA’s Historic Taste of Soul Festival Will Showcase Native, Drought-Inspired Landscaping with the Save Our Water Campaign