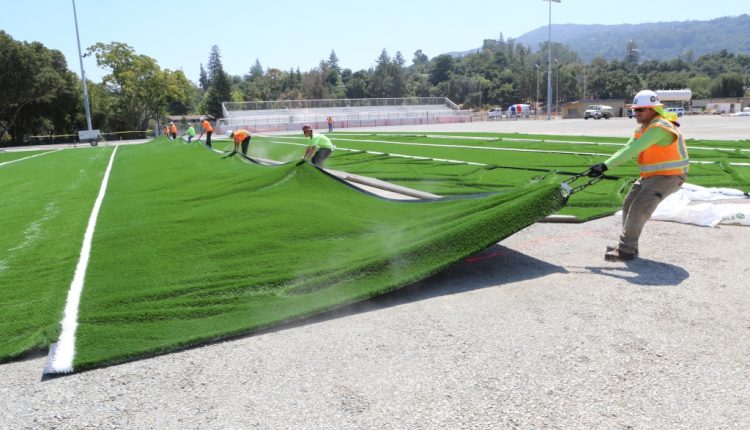 There’s a turf dispute in the Los Gatos Union School District. That is, there’s a debate between parents, staff and local environmental groups about whether to install artificial turf on elementary school grounds.

The district board was set to discuss the possibility of installing the turf, which is often chosen as a drought-friendly alternative to natural grass, at its Nov. 18 meeting. Artificial grass is not new to schools in town: In 2015, Los Gatos and Saratoga high schools both received Measure E-funded artificial grass.

The debate comes just weeks after the City of Millbrae enacted a temporary ban on installing artificial turf, citing environmental concerns that may outweigh the drought mitigation.

The Audubon Society and the Sierra Club both oppose the use of artificial turf on elementary school campuses. According to Gladwyn d’Souza, conservation committee chair for the Loma Prieta Chapter of the Sierra Club, the environmental advocacy group got involved after a parent in the district reached out to see whether the club had a stance on the issue.

“​​Our position is that the controversial grass is both toxic as well as polluting within watersheds like the Los Gatos Creek, so we said we would be happy to write a letter to the school district,” d’Souza said.

The chapter submitted a letter to the Los Gatos school board opposing the artificial grass. The letter cited environmental concerns, such as the use of fossil fuels to produce plastic turf and the potential micro-plastic and gas pollution caused by the fake grass.

“The impact of decisions to continue using plastics today will reverberate with our children trying to deal with more severe wildfires, droughts and flooding,” the letter stated.

Opponents also cite health concerns. Synthetic grass gets much hotter than its natural counterpart, causing kids to overheat or even sustain burns, according to the Sierra Club. Many artificial grasses also contain PFAS, known as “forever chemicals,” which have become a major point of debate among health and environmental advocates.

Because of the potential for “dust” from the field, the guidelines recommend vigorous handwashing before eating, even saying users should change their clothes after coming in contact with artificial turf to avoid contaminating other surfaces.

Susan Tavana, owner of Los Gatos Pediatric Dentistry, has three children who attend Van Meter Elementary School in Los Gatos. She said she is keeping an open mind about whether to support or oppose the artificial turf; her main concern, as a health professional and a mother, is the students’ safety.

She said if the district decides to install the turf, that will add some logistical challenges for school staff and volunteers who are in charge of enforcing CDC guidelines. In that case, she added, the district will need to equip everyone with the tools they need to make sure kids aren’t ingesting or inhaling anything potentially harmful.

“As long as the district’s guiding principle is how to keep the children safe, I’m fully aligned with that,” Tavana said.