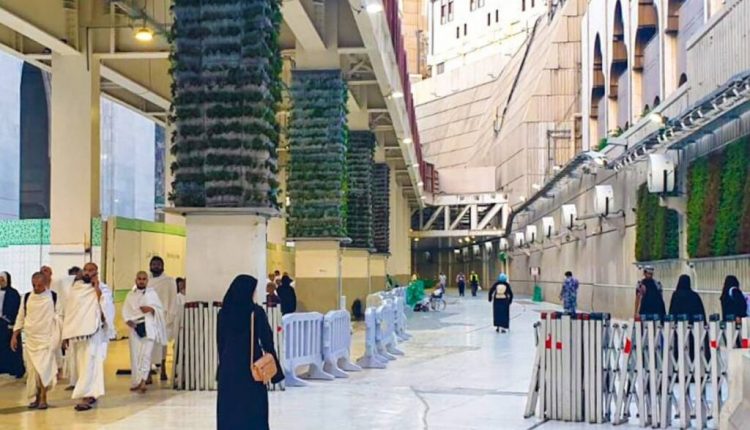 Riyadh: In an effort to combat climate change and rising temperatures, the Kingdom of Saudi Arabia has initiated a landscaping project in the corridor of the courtyards of the Grand Mosque in Makkah Al-Mukarramah, local media reported.

The images and video clips recently circulated on social media platforms showed number of trees and green colors spread in the courtyards of the Grand Mosque.

The plants were placed on columns, walls, and open spaces in the sanctuary, so that they would be out of reach of the hands of pilgrims, according to the Arabic channel Al-Arabiya.

It stated that the afforestation work will not affect the areas designated for prayer, and that certain types of plants have been allocated so as not to be attractive to insects so as not to affect the worshipers and guests of the Grand Mosque.

It also indicated that 7,344 square meters were allocated for plant cultivation, divided into 25 different sites, with the aim of increasing oxygen in open and closed spaces.

The initiative aims to enhance the environmental vegetation cover, and will be followed by subsequent stages of afforestation to include most of the mosque sites.

In January 2021, the General President of the Affairs of the Two Holy Mosques, Sheikh Abdul Rahman Al-Sudais, announced that he was discussing a proposal to plant open squares, columns and bridges in the Grand Mosque.

It is worth noting that the project is in line with the Kingdom’s Vision 2030 and the Saudi Green Initiative (SGI), which encourages afforestation and greening to stop the worsening climate crisis in the region.

This project will also help mitigate the impact of global warming, reduce air pollution, and improve air quality in general. It also aims for the courtyards to be environmentally friendly through ornamental plants and shade tools, commensurate with the climatic conditions in the Grand Mosque area.

The average temperature in Makkah hovers above 40 degrees Celsius in the summer which is expected to rise further due to global warming in the next few years.

Starting of landscaping project in the surrounding of #Makkah Grand Mosque 🕋. To enhance vegetation cover 🍃 and soften the atmosphere in #MasjidAlHaram, to benefit from ablution water by recycling & treating it for use in the process of irritating trees 🌲🌳 and plants 🪴🌱 .. pic.twitter.com/ex1bVfhOkN