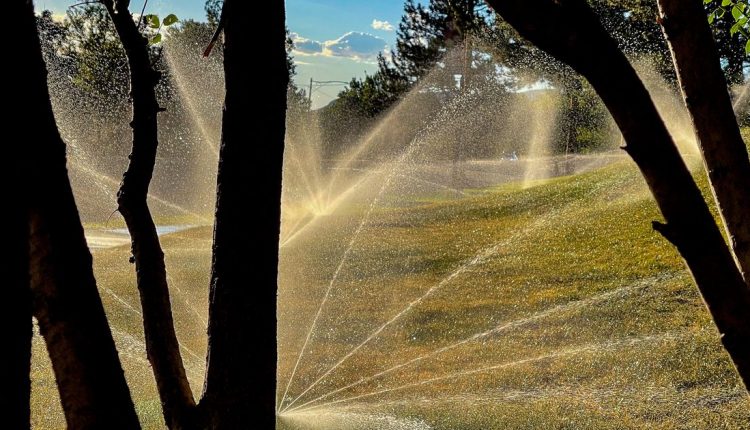 County officials say the fields won’t just save water. They will increase recreation opportunities by being available year-round.

Salt Lake County is poised to save more than 11 million gallons of water a year under two measures aimed at curbing consumption.

Next week, council members are expected to approve using $8.4 million in federal pandemic relief money to convert three athletic fields in Murray from natural grass to artificial turf, and about 140 parking strips and parking lot islands to water-smart landscaping in 40 county-owned locations.

The move comes as Utah and other Western states come to grips with ongoing drought and stare down a third future.

Martin Jensen, parks and recreation division director, said the plan to convert three playing fields next to the County Ice Center in Murray started with a conversation about water conservation.

“We live in a desert,” he said. “Water is becoming scarce, and we have to look at other options to still be able to try and provide recreation services.”

By replacing the Murray grass with artificial turf, the county will not only save water but also expand recreation opportunities because the fields will be available year-round.

Jensen said the conversion will save about 6 million gallons of water and $75,000 in maintenance and water costs every year. The synthetic fields feel and play similar to natural grass, Jensen said, and are expected to last about a decade.

Artificial turf playing surfaces are hardly rare in Utah, but the shift in Murray would represent the first outdoor synthetic turf playing fields owned by Salt Lake County and available for public use.

Jensen said the county isn’t looking to change every field in the valley to artificial turf. Officials will start with the Murray project and potentially expand to other locations in the future.

The county will put the Murray project out to bid next month and hopes to get started on the changeover later this summer or in early fall. Officials expect the fields to be ready for play early next year.

The council also is expected to sign off on a measure to convert 142 parking strips and parking lot islands from useless grass to water-wise landscaping. The conversions, first presented to the council last month, will occur at 40 county-owned locations and are expected to save 5.3 million gallons of water a year.

Kyle Roerink, executive director of the Great Basin Water Network, said saving millions of gallons from these turf conversions is great, but it is a relatively small amount of water and substantially more conservation needs to happen.

“As we’re seeing all across the state of Utah,” Roerink said, “residents should be left wondering if efforts like this are either public relations gimmicks or serious attempts at raising awareness and beginning to rip out wasteful water practices throughout the region. ”

But Mayor Jenny Wilson said in a statement that the plans represent a serious commitment to water conservation.

“Salt Lake County is doing this to both save water and raise awareness,” she said. “We are in a dire water situation and have to practice what we preach. We also hope that the public sees how we can convert parking strips and medians into really attractive, drought-resistant areas that inspire businesses and residents to follow suit.”

The turf conversions will be paid for by the American Rescue Plan Act, a pandemic relief bill approved by Congress last year.