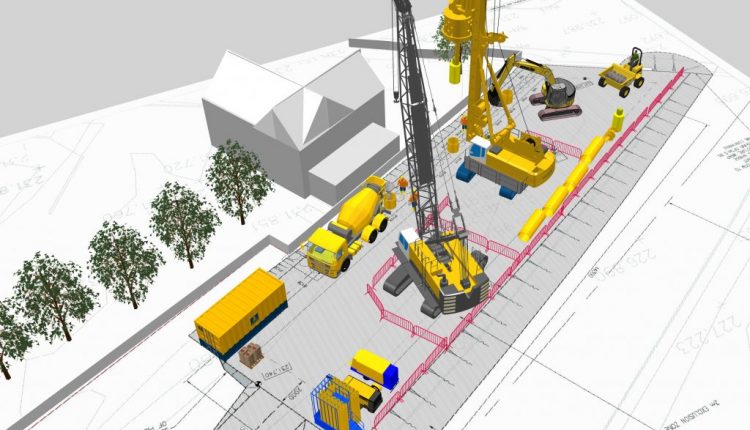 Retaining walls: Hard rock piling on Heads of the Valleys

Bauer Technologies, a UK-based subsidiary of Bauer Group, is currently piling through hard rock to create retaining walls in the Welsh village of Cefn Coed around 40km north west of Cardiff.

The piling specialist is working as a subcontractor for Future Valleys Construction (FVC), which is building the £590M A465 Heads of the Valleys section five and six on behalf of the Welsh Government. FVC comprises FCC, Roadbridge, Meridiam, Alun Griffiths (Contractors) and Atkins.

Sections one, two, three and four of the A465 dualling scheme between Hirwaun and Abergavenny are already complete. Section five and six – the last phase of the scheme – will transform a 17.7km stretch of existing highway between Dowlais Top and Hirwaun from single lane to a dual carriageway to improve traffic flow and journey safety.

Bauer has started carrying out works for new retaining walls and foundations for bridge abutments across section five.

It is currently working in Cefn Coed, a suburb of Merthyr Tydfil where the existing A465 cuts through the village from east to west in a rock cutting. Dualling the road means that the cutting will have to be made wider to make room for the extra lanes. This in turn means that the bridge which takes Cefn Coed’s High Street across the cutting from north to south is being replaced with a longer structure.

A crucial part of this work is the construction of piled retaining walls along the alignment of the widened road. Once the retaining walls are complete, the existing cutting will be cut back.

In October 2021 Bauer mobilized equipment onto the High Street to start this work. It has completed piling for the retaining wall on the south east side of the A465 and has just started piling on the south west side. As of 8 February, Bauer had installed 30, 900mm diameter reinforced piles 14m below piling platform level, using 385m3 of concrete.

To create a temporary piling platform a reinforced earth retaining wall with a 70° slope has been installed on the south side of the road. Once Bauer has capped all the piles, the platform will be dismantled, the earth and rock will be removed from the front of the wall, and the exposed bored pile retaining wall will be clad with stone.

While piling work is ongoing, Bauer will put in a temporary footbridge alongside the existing High Street bridge to allow pedestrians to cross the A465. Services will be temporarily installed underneath the footbridge while the old bridge is demolished and the new one is built. After it has finished on the retaining wall at Cefn Coed, Bauer will start work on the Taf Fawr bridge east abutment piles and Taff trail retaining wall further west.

The site of the retaining walls on Cefn Coed High Street is a particularly difficult place for piling due to its location above hard rock.

The upper rock encountered around 1m below the piling platform is part of the Twrch Sandstone Formation, a type of Carboniferous Millstone Grit, which leads into upper limestone. Because of this, piling work to date has required an element of hard rock drilling.

Bauer Technologies managing director Michael Jones says this has added considerable complexity to the project. He explains: “We’re having to pile through solid rock, so we’ve got deep rock sockets from immediately below piling platform level to carry the lateral load of the retained embankment.”

To get through the rock, the team had to use specialized drilling equipment. “We had anticipated using standard rock drilling tools,” says Jones, “but it quickly became evident that the most aggressive methods would be needed.”

These have included using roller bit core barrels, progressive rock augers and cross cutters, which are usually reserved for the hardest of rock formations.

Bauer is also using one of his heaviest duty piling rigs, the BG39.

“We don’t think that the project could have really been done with anything less,” Jones notes. “Other piling techniques, such as continuous flight auger piling, would have been impossible. It had to be rotary bored piling using these super heavy-duty rigs with high torque.”

When piling for the retaining wall, the team also encountered large, cemented matrixes of conglomerate made up of quartz pebble clasts in the sandstone, further complicating the already difficult drilling.

Future Valleys Construction director Mike Cummine observes that the whole heads of the Valleys region is a complicated place for piling.

“Geology-wise, you tend to be in highly variable rock. It’s everything from soft mudstones through to very hard rock where the coal measures used to be. And then in quite a few areas, we’ve got glacial till,” he says.

Glacial till poses another challenge for highway earthworks because it can hold a lot of moisture and is difficult to work with when wet. Since Cefn Coed is located on top of a hill, and it gets heavy rainfall, conditions are extremely wet. To bring the moisture content down and achieve the necessary compaction, Bauer and FVC are using lime to dry the earth in some areas, Cummine explains.

Due to the karst features in the limestone, caves and voids posed a problem for piling. When concrete is poured into a pile it can escape into these cavities, so to stop this, Bauer fixed a geotextile sleeve to the outside of the pile cage.

The geotextile material is Bullflex which has several benefits over a traditional steel liner.

Jones explains: “It’s easily transported and then stored on site. It’s much cheaper than the traditional steel liners. And it’s more economical – with a traditional liner, you have to fit it into every pile. With this system we’re able to use the liner where we’ve identified that it’s required.”

Similarly, when water was introduced down the boreholes to cool and lubricate the auger tools, which become hot from the friction of the rock drilling, it disappeared as soon as it met a void and could not easily be replaced. As a solution, dry mix concrete was poured down into the bore to seal up the void.

After the concrete reached the initial strength, the team could go back in and core through the concrete with the void sealed.

Underground caves and mines can also be home to bats, so licensing to carry out the drilling works had to be obtained from Natural Resources Wales and the Environment Agency in Wales. Because of this, Bauer and FVC have introduced additional environmental monitoring.

A key issue for the piling works has been drilling close to residential housing and working near live carriageways. FVC has had to shut down Cefn Coed High Street to build the piling platform and allow the team to carry out work safely. It has also had to reduce the width of the A465 to a single carriageway.

Limited space has meant that Bauer has stationed his piling rig within a few meters of a side wall of a house. “It’s very close to where people live right in the middle of a village,” notes Cummine, “and although we shut the road next to where it’s working, there is still a public footpath there.”

Because of the proximity of the piling work to homes and businesses, Bauer and FVC are taking particular care to minimize disruption where possible. Jones says that the roller bit core barrels have helped reduce noise and vibration which are an inevitable result of hard rock drilling. Bauer has taken further measures such as erecting fences and screening the works as much as possible from nearby landowners and residents.