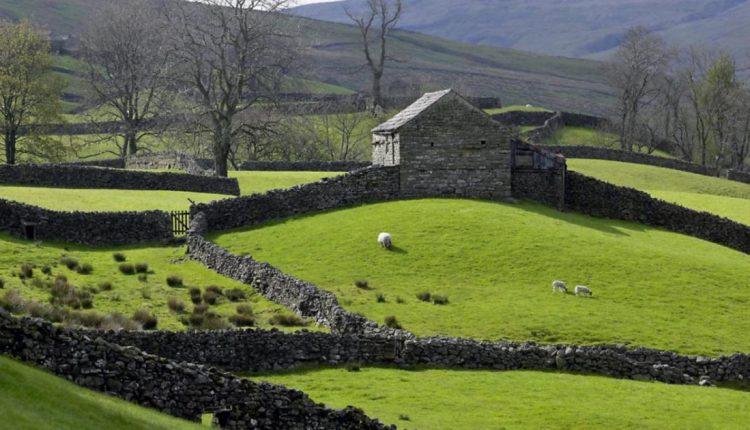 Dry stone walls are the thread that bind Yorkshire’s landscape. Fancy giving it a go? Pete Maynard quit his job to do just that.

Seven years ago Pete Maynard decided to say goodbye to his stress-filled life as a lawyer to take on the altogether more pleasing pastime of dry stone walling.

Sounds romantic doesn’t it? From rat race to an altogether simpler vocation of outdoor life and tradition in the heart of Yorkshire.

Based in Ravenscar on the North York Moors, Pete learned his trade from a waller who had been working for more than 50 years and was still going strong, albeit part-time, at the age of 78.

Pete’s walling work is strenuous but satisfying, less lucrative but more than rewarded by an ‘office’ that has no ringing phones, a dazzling view and, on one memorable morning, ‘the sunlight highlighting five buzzards soaring together high above a beautiful valley; it was a wonderful morning!’

You won’t find that on many a job description and the appeal is obvious. It’s one of the reasons the craft of dry stone walling appeals across the board – from people like Pete who want a life-changing career move to those who are happy to volunteer or join working holidays with the likes of the National Trust. Despite being rooted so firmly in the past, the craft of dry stone walling shows no signs of becoming consigned to history. Membership of the Yorkshire Dry Stone Walling Guild (YDSWG) is growing steadily and the number of people attending the Guild’s training courses has doubled in the last six years.

As Pete says, there’s a deep satisfaction of adding something to the landscape that one of his clients described as ‘really beautiful’.

Threading their way across some of Britain’s most beautiful landscapes for many hundreds of years, dry stone walls remain a quintessential and much-loved feature of the Yorkshire countryside. The Dales alone are believed to have around 5,000 miles of them and whilst these may appear to be the simplest of structures, there’s more to them than meets the eye.

Dry stone walls, so named because they are built without the use of mortar, are held together by the arrangement and mass of their stones. Rather than gradually weakening like an ordinary wall does when the mortar ages and cracks, a dry stone wall actually strengthens over time, as gravity acts on the stones and they lock ever closer. In fact, a well-built dry stone wall can easily last a century and often very much longer.

Tim Jones, a member of the Yorkshire Dry Stone Walling Guild, has been a professional waller and stoneworker for most of his working life, which is now well over 20 years.

He too learned from years spent working side by side with an experienced waller only too delighted to pass on his craft. To Tim, it is both a craft and an art.

‘It’s a craft because not everybody can do it, you have to know what you’re doing to do it properly, and, whilst to some people it’s just making a structure, to me it’s an art because everything I do, I like to look aesthetically pleasing.’

This is evident throughout the villages around Scarborough and beyond, where Tim’s work is easy to spot, with its extremely neat courses (layers of stone) and flat wall faces. In fact, knowing that the walls he has built will be there long after he has gone is definitely one of the perks for Tim.

Alongside fresh air, exercise and peace, this provides a good pay off for the toll the work takes physically especially during the freezing winter months. Tim laughs when asked about the saying that a true waller only picks up each stone once.

‘You can’t see what’s underneath a stone that’s lying down – you can’t see if there’s a big lump, so you could end up with a really bad-looking wall that will have big gaps at the front, especially with the stone around here.’

Tim has seen a change in dry stone wall demand over the years. During the property boom when the trend for barn conversions was at its peak, he was building mostly new walls whereas his work now mainly consists of repairing existing walls. The growing awareness of environmental issues may herald a resurgence of interest in dry stone walls, he hopes, as the green credentials of this ancient construction method are rediscovered by the masses.

This type of construction method was used by ancient civilizations across the world and many examples from these times still stand today, such as the Egyptian Pyramids and the Incan temple of Maccha Picchu. The oldest in the UK can be seen at Skara Brae, a Neolithic village in Orkney that is believed to date back to 3500 BC. Closer to home, North Yorkshire’s Fountains Abbey has some wonderful medieval examples, but the majority of the county’s dry stone walls were built during the height of the enclosure acts in the 18th and 19th century, when common land was being divided up and structures were needed to mark boundaries or contain livestock.

Dry stone walls have traditionally been used for these purposes in upland areas, where the exposed terrain can make it hard for hedges and trees to thrive. The rocky, thin soil that is characteristic of these places is cleared to allow for grazing or crops and the resulting stone goes into the walls, making the whole process entirely environmentally friendly.

Differences in local geology mean the stone available can vary hugely in size, color and shape from place to place, which has played a part in the development of contrasting designs and patterns across the UK.

Give it a go

If you fancy getting stuck in with some dry stone walling there are plenty of volunteering groups across Yorkshire who would love your support.

Try a dry stone walling holiday with the National Trust in Upper Wharfedale. You stay in a converted barn bunkhouse in Buckden. Cost is £200 a week.

In Nidderdale you can become a dry stone walling volunteer. The group meets every Wednesday. No experience needed, they will train you.

The Dry Stone Walling Association of Great Britain (DSWA) is a registered charity that works to advance education in the craft and heritage of dry stone walling for the public benefit.