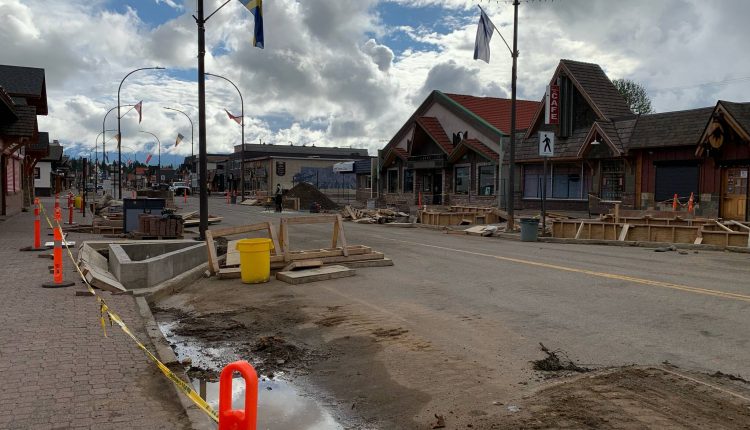 The re-landscaping of Main Street in Smithers just got more expensive.

Town council agreed to increase the Downtown Landscaping Revitalization total project budget to $1,260,000.00 from $1,160,000.00, with the additional funds to come from the Northern Capital Planning Grant.

The crews from Lyons Landscaping, out of Kamloops, discovered the irrigation lines had been severely damaged due to freezing water during excavation of some of the planting areas in some of the medians.

Town staff told council that in order to maintain the original design and contract landscape replacement areas, the irrigation lines must be repaired.

Repairing the irrigation lines in the medians will involve removing the red brick pavers in the median, removing curb and gutter, and removing asphalt on Main Street to replace the branch supply line to the median and lateral lines within the medians.

These repairs requiring asphalt and curb patches are not in the scope of work in the contract and beyond the project contingency.

Mayor Gladys Atrill said it is something that needs to be done.

“Of course, we don’t like to have to increase the budget but until the ground was open and the irrigation lines were inspected, it wasn’t known the extent of the damage to the irrigation lines. I talked to one of the contractors downtown and he said there was roots growing into them and some were broken beyond repair so they need to be replaced,” she said. “We are building a project for the next 40 or 50 years so we need to make sure those lines are good and will work for the future. So, no, never want to increase the budget but recognize that when something new is discovered we have to deal with it.”

Overall, she is happy with the progress that is being made.

“It is really starting to take shape, we can kind of get a vision of what is going to look like. There is still a lot to do but it is shaping up and we can see where it is going,” Atrill added. “The finishing pieces around some of the concrete structures are going in, trees are coming this month. I’m quite happy with it.”

The trees and shrubs will be planted in the coming weeks.

The bulk of the project should wrap up in mid-August with no more street closures, according to town officials.

The bulk of the re-landscaping on Main Street in Smithers is slated to wrap up mid-August. (Grant Harris photo)

The town is touting no more street closures as of mid-August. (Grant Harris photo)